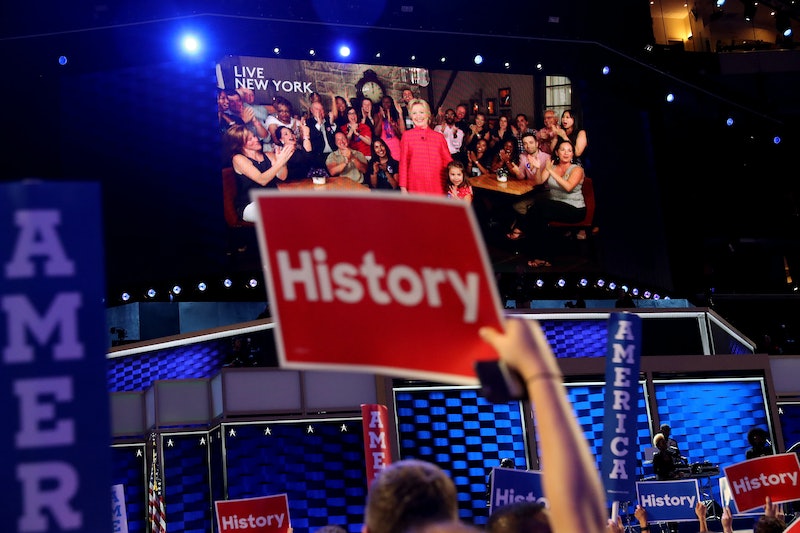 The Democratic Party made history Tuesday night as the first major political party to nominate a female presidential candidate. After a grueling year of campaigning and party division, Hillary Clinton's landmark nomination feels like the end of a long journey, but it's really just the beginning. Facing an uphill battle after a convention marred with scandal and an opponent who has defied all odds, Clinton's election to the White House doesn't seem as assured as many would like. Now that she's officially the nominee and the next phase of the campaign is beginning, here's what you have to do to support Hillary Clinton so she can become the next President of the United States.

Believe it or not, your first step to support Clinton is to get out and campaign for your House and Senate elections. If Clinton is going to put any of her plans into action, she needs a Democratic Congress on her side to get it done. Democrats could potentially pick up seven seats in the Senate, which would turn over control of the Senate back to the left.

In the House, every seat is up for reelection, and there seems to be even more opportunity to make change happen this year due to the unusually engaging election cycle. Expert predictions have the Democrats still down in the House after November, but with enough voter mobilization and campaign support, some of those competitive races could flip pretty easily.

Step two is to get out there and campaign for Clinton herself. While this might seem kind of backwards, it's a stronger strategy in the long run. If Clinton is elected but the Republicans retain control of Congress, she won't be able to accomplish the things she promised during the campaign. But because she's facing an unexpectedly challenge from Donald Trump as the Republican nominee, she is going to need dedicated workers to support her campaign in every corner of the country.

Grab some friends and get involved, look to engage in conversation with people who don't agree with you, work to change some minds in a friendly and polite way. The last thing this election needs is more divisiveness, so if you do decide to go out and campaign, remember to kill them with kindness.

Step three is state and local elections. Although state and local officials obviously don't work with the federal government as much as Congress, they are seriously equally as important. Most governing happens at the local level, and if you really want to see the change that Clinton talks about in her campaign, you have to get leaders who share her views elected at every level of government.

It's really tough to get informed on these issues because they often don't receive enough coverage, but you can make the change happen. Start a blog covering your local election or pass out fliers on local campaign issues in your neighborhood. More people invested in local elections means higher voter turnout which typically means more Democrats voting which means a Clinton victory.

If you want to see the first female president take office in January, you're gonna have to put in some work. Elections really don't run themselves — they need people like you to get invested and work to inspire others. That's going to be even more of a challenge this year due to Clinton's political history, so make sure to step up your game if you want Clinton to win the White House.