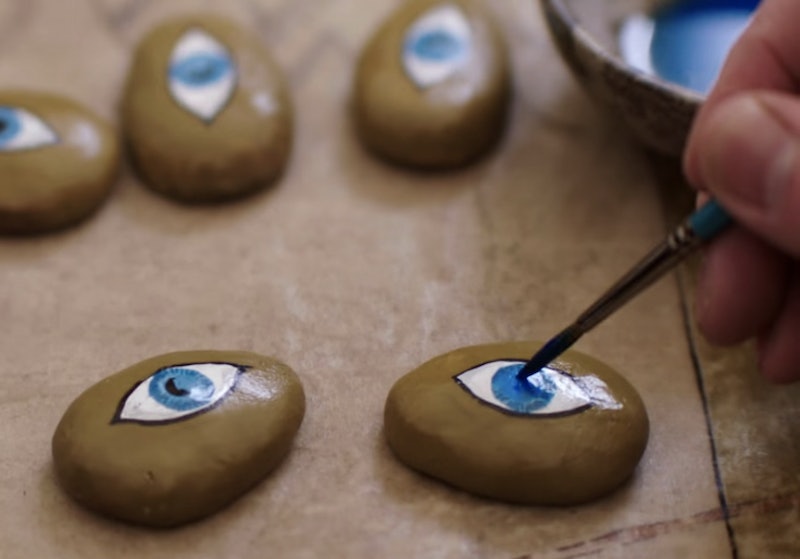 For six seasons, HBO's Game of Thrones has entertained millions of viewers worldwide, and Season 6 — the first year the series diverged from the books written by George R. R. Martin — really kicked the excitement up a few notches. It's no surprise then that I, along with all other Game of Thrones fans, am eagerly awaiting Season 7, even though it won't arrive until next summer. Still, a teaser for Season 7 gives us some hints about what to expect. So, here's the one clue from the Game of Thrones Season 7 trailer that tells us how it will unfold, and it all has to do with some stones painted with open eyes.

First off, let's refresh ourselves on where Season 6 left off: After Cersei Lannister completely demolished the Sept of Baelor thanks to a stock of the Mad King's wildfire, she was made queen of Westeros. Up north, Jon Snow and Sansa Stark had retaken Winterfell from the Boltons and decided to wage war against the White Walkers. Meanwhile, across the narrow sea, Daenerys Targaryen led her army of Dothraki and Unsullied soldiers along with her dragons as well as the Tyrell and Martell allies to Westeros in order to reclaim her throne.

So, with all that happening in Season 6, we are all understandably excited for Season 7 and without the help of Martin's books to guide us, we're left scrounging around the Internet and parsing through past episodes as well as any new videos for clues of what's to come. Since Game of Thrones released a Season 7 teaser video, announcing that the show is back in production and gearing up for next year, I searched every frame for any and all clues. Unfortunately, those tricky video editors at HBO were pretty good at keeping us in the dark (probably helped along by the fact that not much progress has actually been made on Season 7 in terms of production since they only just started). But, I did catch something that hints at how Season 7 will unfold: Funeral stones.

In the Faith of the Seven (the religion to which many in King's Landing belong), it's customary for two stones painted with open eyes to be placed on the eyes of dead nobles during a funeral. It's meant to remind those of the faith that death is not the end; though people close their eyes on life, they open in the afterlife. The short clip of funeral stones being painted for Game of Thrones Season 7 seems to indicate we'll be seeing quite a few funerals next year — but who are they for?

Well, it's unlikely the funerals will be for anyone in the Sept of Baelor since their bodies would be too destroyed (if they weren't completely incinerated) for a proper funeral. That still leaves Tommen's funeral, but if we go by what happened following Joffrey's death, the death of the king usually precedes the crowning of the next ruler and since Cersei has been crowned Tommen's funeral may have already occurred.

So, could we be seeing plenty more deaths in Season 7? Undoubtedly, though it remains to be seen how many of these victims will receive funerals. Still, the painting of these funeral stones in preparation for Season 7 seems to indicate we'll be seeing the funerals of many nobles in King's Landing come next summer.