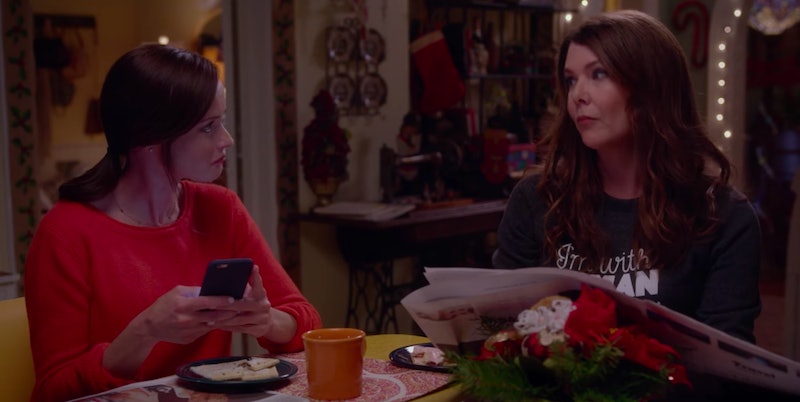 If you still wish you could be a part of the Gilmore clan and have a cottage in the heart of Stars Hollow, well, you can't — but that doesn't mean you can't visit your beloved small town residents. A Gilmore Girls revival is officially coming to Netflix, over nine years after the show's series finale in 2007. The four-part series, which will feature 90-minute episodes named after the four seasons, will finally give us the opportunity to catch up with the lives of our favorite mother and daughter duo. Did Luke and Lorelai ever get hitched? Did Rory become a famous journalist? So much has changed since we last saw the Gilmore girls, but fortunately, the new Gilmore Girls revival trailer hints that one thing hasn't changed a bit — and all fans should appreciate it.

It's hard to talk about the new trailer without mentioning that some things definitely are different from the last time we saw the Gilmores chatting over a kitchen table. For one thing, the topic of their conversation definitely would have been different in 2007, when the original show ended: In the teaser, Lorelai asks Rory if Amy Schumer — a comedian whose first television appearance actually was in 2007 — would like her. This is something there's no way Lorelai would care about, or even think to ask, back in 2007.

However, when the topic quickly shifts to a famous plant, that's when we realize that, oh yeah, these girls are exactly as we left them — Rory especially.

During the conversation about a plant that smells like "dead fish," Rory is bothered by the fact that she has no idea what this plant is called — so, naturally, she decides she needs to know. Rory takes out her smart phone (the first iPhone didn't come out until a month after Gilmore Girls ended, FYI) and starts researching said plant. Why? Because, in true Rory fashion, "I like to know things."

It's great to know that Yale alum Rory hasn't abandoned her quest for knowledge (or her love of all things reading) in the revival — she can't go through a single silly conversation without making sure she has all of the facts. That's the Rory we know and love, and can't wait to see when the revival begins streaming on Nov. 25.