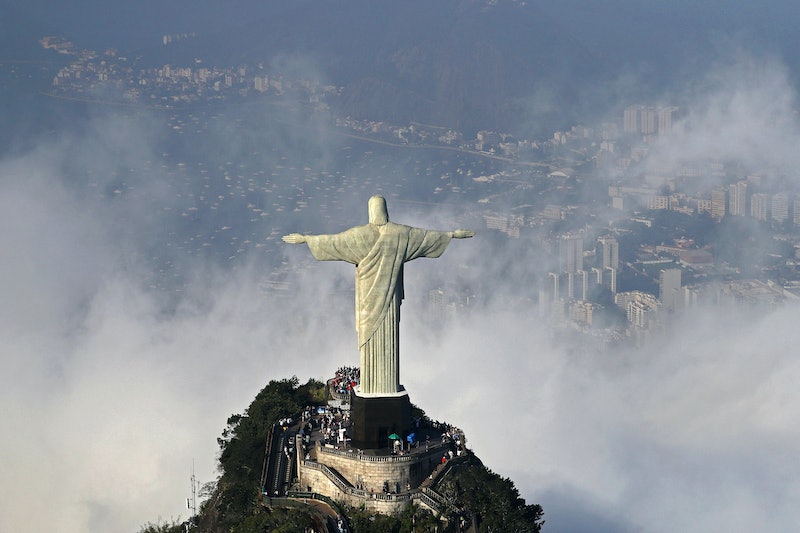 Whether sporting events are your jam or not, everyone knows that the Opening Ceremony is the best part of the Olympics. The music, dancing, fireworks, and international unity is good for the soul — and we need that now more than ever. This year, you may want to stay off social media, because NBC has announced that the 2016 Opening Ceremony in Rio will not be live. It will be broadcast to some of us on a one-hour delay, at 8 p.m. EST and 7 p.m. Central Time, and for others on a four-hour delay, at 7 p.m. Mountain Time and 8 p.m. PST.

Why did the network make this decision? Since it's happening on a Friday, this gives most working Americans the time to get home and settle in for the festivities. On another practical note, this also allows for commercial breaks that aren't built into the live ceremony. Most live television isn't truly live, and since this event is airing in another country and time zone, there are even more logistical concerns. At a press event, NBC Sports Group chairman Mark Lazarus said that NBC planned to "curate" the event and gave this as an explanation:

"We think it's important to give the context to the show. These Opening Ceremonies will be a celebration of Brazilian culture, of Rio, of the pageantry, of the excitement, of the flair that this beautiful nation has. We think it's important that we're able to put that in context for the viewer so that it's not just a flash of color."

I think when people hear that something is not being broadcast live, they fear that the event will be edited, which is a valid concern. In 2014, the Opening Ceremony broadcast omitted an anti-discrimination statement from the IOC. Those comments were edited for time, according to an NBC spokesman in an interview with TheWrap.

That happened two years after the London Olympics, in which NBC's broadcast cut out a full performance tribute to victims of terrorism. USA Today reported at the time that when asked about the edits, NBC spokesman Greg Hughes said that "our programming is tailored for the US audience. It's a tribute to [producer] Danny Boyle that it required so little editing." Luckily, we do live in the digital age, so if anything from the 2016 Opening Ceremony is cut for any reason, it likely won’t remain unseen for long.

Overall, NBC's reasons for airing the Olympic Opening ceremony on a one-hour delay are sound and probably unavoidable, even if it is a bit of a bummer. I would love the option to watch in the middle of the day and not have anything spelled out for me, but that's just who I am! The curated, delayed broadcast will make for the optimum community livetweeting experience, after all. No matter what, the Opening Ceremony is going to be beautiful, exciting, and unforgettable as always.