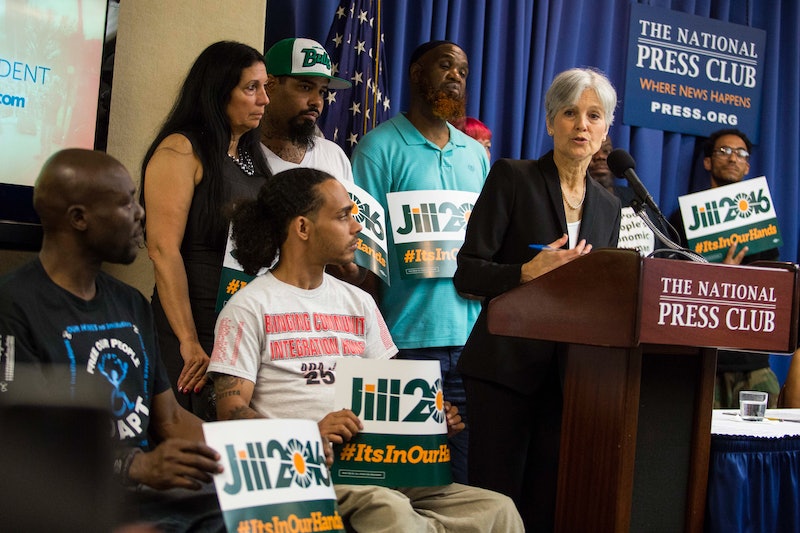 Many Americans are not satisfied with their major-party presidential options in 2016. With record-high unfavorability ratings for both Republican nominee Donald Trump and Democratic nominee Hillary Clinton, many Americans are eager for alternatives than they've been in a long time, and, according to a recent Reuters/Ipsos, a good portion are willing to consider them. Libertarian Party nominee Gary Johnson and presumptive Green Party nominee Jill Stein are the primary third-party challengers to the major-party candidates. Stein and Johnson could attract votes away from the major parties in volumes we haven't seen in quite some time.

The Reuters/Ipsos poll, conducted during the first week of July, found that 21 percent of likely voters taking the poll didn't plan to vote for either Trump or Clinton in November. To put that into perspective, 13 percent of general election voters in 2012 voted for someone other than the major-party options.

The poll also yielded this glum result: Nearly half of the people who said they planned to vote for Clinton or Trump only want to do so to stop the other major-party candidate from winning. It wouldn't be surprising if double the number of people voted third-party this year, given both the record-high unfavorability ratings and the fact that not one, but two third-partiers are appealing to voters on the right and left in 2016.

Stein is making a strong pitch to backers of Sen. Bernie Sanders; the Green Party platform is identical to his in many ways, though it goes further left on certain issues. For example, she's calling for a 50 percent reduction in the military budget, the closing of military bases all around the world, and 100 percent reliance on renewable energy sources in the United States by 2030.

At the time of this writing, the polling averages for two-way match-ups between Trump and Clinton, and for four-way match-ups including Johnson and Stein, yield numbers so close that it's not possible to determine whether one major-party candidate is more impacted by a voter draw from Stein or Johnson than the other. In two-way match-ups, Trump averages 45.7 percent to Clinton's 44.6. In the four-way polls, their numbers drop to 40.2 and 40.4 percent, respectively. Stein is averaging 3 percent, and Johnson is at 7.2.

One final important finding of the Reuters/Ipsos poll is that very few people are familiar with either third-party candidate, and that providing a bit of information about them boosted both their performances in the poll. Only 23 percent of participants were at least "somewhat familiar" with the Libertarian candidate, and 16 percent were so with Stein. When participants were provided with information concerning their energy policies, however, their performances improved. Stein went from 4 to 5 percent support, and Johnson, from 5 to 7 percent.

Anything can happen going forward, and the election is over three months away. But polling thus far suggests that, if Johnson and Stein are able to raise awareness of themselves among the public, there is no dearth of voter discontent from which their campaigns might benefit.