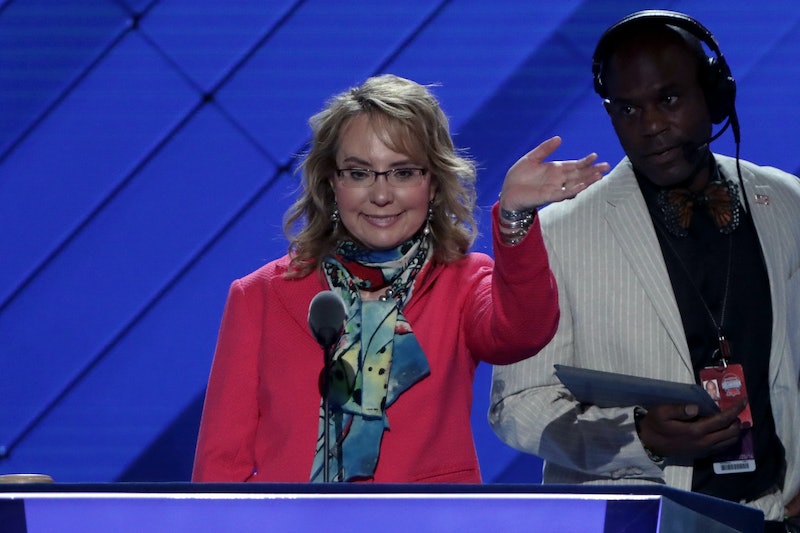 The Democratic National Convention has focused largely on the theme of inclusion, and the idea that the party is welcoming of all Americans, as opposed to any single policy issue. If any speaker was going to deviate from that path, though, it would be Gabby Giffords. Ever since surviving a gunshot wound to the head in 2011, the former Arizona congresswoman has been a vocal and staunch proponent of stronger gun laws, and Giffords' speech at the DNC, which included her husband Mark Kelly, was a chance for gun control, an animating issue for many in the Democratic base, to take center stage.

Giffords was a moderate Democratic congresswoman from Arizona's 8th district. During a constituent meeting in Tuscon in 2011, a man stormed the event and shot Giffords and 18 others. Despite taking a bullet to head at point blank range, Giffords survived and, though she's reportedly a gun owner herself, has been advocating for stricter firearm regulations ever since.

Democrats have long been the party of stronger gun control, but the issue become increasingly central to the party's platform in recent years. This is largely due to a string of high-profile shootings, including both apolitical massacres, like the one at Sandy Hook, and terrorist attacks, such as the shooting at the night club in Orlando.

Here's Giffords' speech to the DNC as prepared.

Hello, fellow Democrats! What a crowd! It's great to be here today. We have important work ahead of us. Work that will determine the future of our country. Are you ready? I'm ready.

I have a passion for helping people. I always have. So does Hillary Clinton. Hillary is tough. Hillary is courageous. She will fight to make our families safer. In the White House, she will stand up to the gun lobby. That's why I'm voting for Hillary!

I know what hate and division can do to our communities. Let's stand up for responsibility. Together we can make sure that respect, hard work, and progress win in November.

In Congress, I learned an important lesson: Strong women get things done! Let's work together to make Hillary our president. I'm with Her! And I know you are too.

Speaking is difficult for me. But come January, I want to say these two words: "Madam President."

Thank you very much.