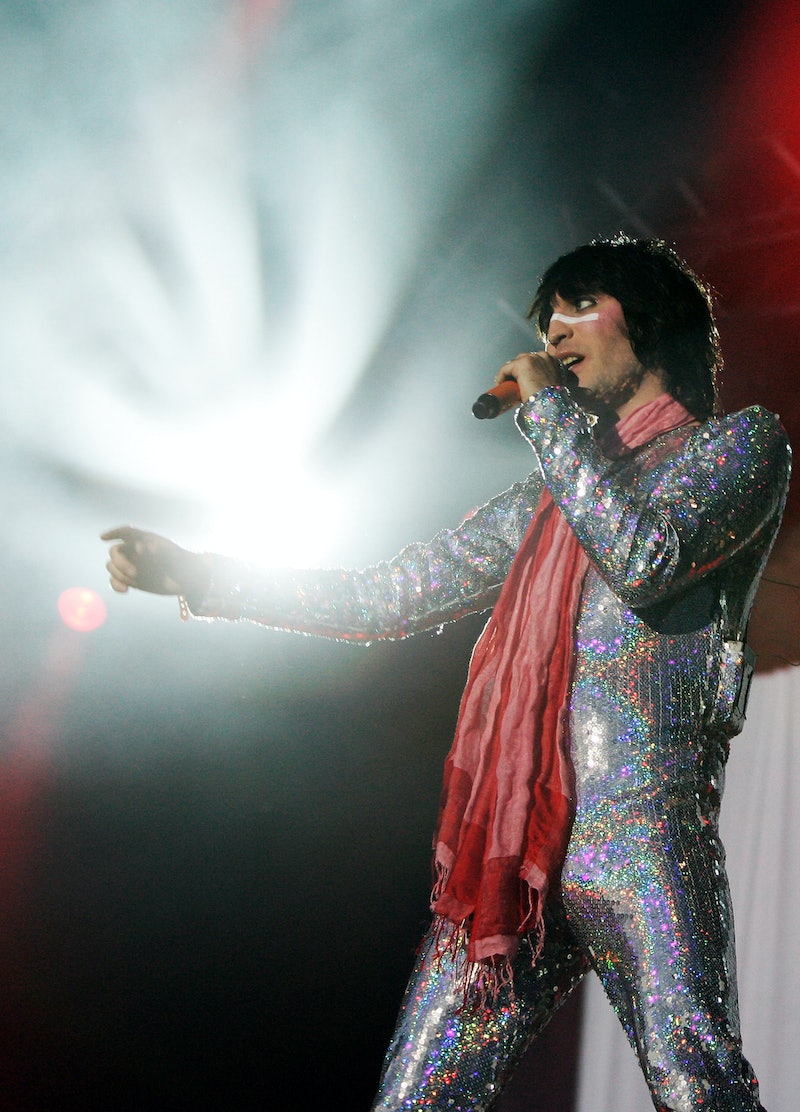 Although there have been many passing fads over the last decade, mid 2000s nu rave style was pretty much an unmissable favorite. The neon-fueled, indie-electro-loving subculture remixed elements of '80s synth and the ever-popular indie crowd with the original rave scene, warping everything together into one brightly-colored mess.

Most people who weren't directly involved with the movement should still remember aspects of the time when re-watching the first few seasons of Skins. The risqué teen TV show ripped off what was essentially a cultural joke with its glow sticks and wayfarers to create its own palatable interpretation. The episode in which Crystal Castles performed was basically the embodiment of what many might have assumed a nu rave club night looked like.

In reality, you would've been seeing familiar MySpace names behind the DJ decks while the ordinary people took to the dance floor alongside legitimate celebrities. Assuming, of course, that you were of legal drinking age. For me, my nu rave phase was more like necking a couple of alco-pops at my friend's house party while their parents were away.

Nu ravers rocked the most obnoxiously unforgettable looks, but these 15 key items are forever etched into my memory of the short-lived scene that died almost exactly a decade ago. Let's be honest: You probably owned at least half of them.

Although headbands were a wardrobe staple for the nu raver, they didn't serve any functional purpose. Instead of keeping hair away from your eyes like they were supposed to, the accessories were placed around the head in a way that made your hair bunch up and your ears stick out. And yes, this a super old photo of fashion blogger Susie Bubble.

Hoods and cowls were absolutely everywhere during this time. I'm not even sure how they managed to stay up with all that enthusiastic dancing. Hair clips, perhaps?

Thanks to British designer Henry Holland, most of us were mega into our slogan tees in the mid 2000s. Following his iconic runway shows, there were plenty of rip-offs floating around and most of your favorite bands of the time probably had their own versions atop their merch tables.

Skinny jeans came back in a big way during the 2000s and many of us are still rocking them today. Nu ravers had to have them in the brightest colors and guys would often be found rummaging through their female friends' wardrobes before the trend properly hit the stores.

With the '80s throwback elements deeply ingrained into this mishmash of a subculture, it's no wonder visors made an appearance at the clubs.

When Kanye West started rocking the shutter shades, nu ravers shortly followed suit. They'd often be seen wearing all types of sunglasses in the dark indoors. However, they weren't shielding their eyes from the strobe lighting. They were just doing it for the look.

What would a rave be without face paint? Some people seemed to completely submerge themselves in the stuff, arriving to events looking like a vaguely human-shaped neon sign.

Nearly everybody owned one of these unmissable hoodies with the white contrast zip, usually in some obnoxiously bright color, too. American Apparel was the go-to store of the avid nu raver, since it had all the basics in every gross hue you needed.

Nu ravers, scene kids, and emos were all wearing bows in the mid 2000s — and the bigger, the better. They were the essential subculture staple and you could find them just about everywhere.

They weren't keeping anybody warm or covering a hickey. These re-appropriated bandanas were merely there for show. Gosh, don't you know anything about style?

Whether you were more into jumpsuits, leggings, or vintage cycle shorts, chances are you probably had a couple of key pieces of lycra in your closet during your long-forgotten nu rave phase. I bet they were made out of some horrendously garish patterns as well.

Although I had a pair of gaudy Nike low-tops myself, there seemed to be way more high-tops on the loose around 2007. These trendy kicks were often spotted in neon, gold, or silver.

There was definitely no need for a vintage '80s windbreaker at your student dance, but there they were nonetheless.

If you found the visor trend a little bit passé, then your next best bet was to opt for a snapback. Of course, you never dared take the sticker off. That was, like, the best bit.

15. Pretty Much Anything As An Accessory

Because nu rave derived its sense of wonder and whimsy from club kid cultures, the most daring of the bunch would often craft accessories from nearly anything. You'd often find cassette tapes attached onto necklaces or cuddly toys being worn as hats. These were crazy times, with outfits to match.

If you need me, I will be in my room obsessively listening to The Klaxons for the foreseeable future. Never forget.