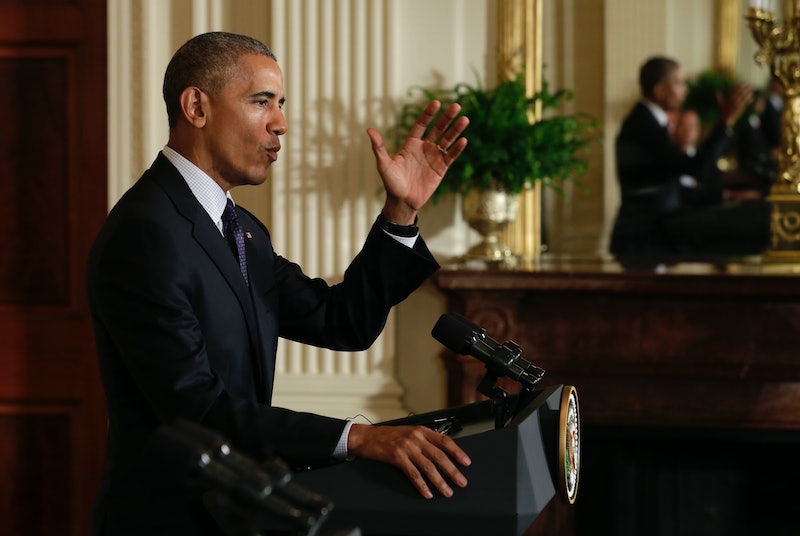 On the third day of the Democratic National Convention, President Barack Obama took to the stage to make his stump speech for presidential nominee Hillary Clinton. Though this was largely Clinton's fiesta, the president was not denied a special tribute on the DNC stage. A 10-minute video, produced by directors Peter Kunhardt and Davis Guggenheim, introduced Obama before he took up the microphone. Along with detailing the president's most significant accomplishments over the past eight years, Obama's DNC introduction video highlighted his character, connecting his achievements to the type of person he is.

"This is someone who walked into office faced with multiple crises — each one of them could sink the country — but he was always calmer than the rest of us," we are told at the beginning of the video. The president's even, measured, smooth temperament is so well known, it was the focal point of his character on the sketch comedy show Key & Peele.

The video interwove difficult decisions Obama has made throughout his two terms with the characteristics of the president that underlay those decisions. When he was faced with whether or not to bail out the automotive industry amid the financial crisis, we are told, his one concern was with how many people would lose jobs if he didn't do so. "Whenever folks were arguing about numbers and politics, he was always the one who brought it back to people," another voice says.

A recounting of the intense partisan divides surrounding the enactment of the Affordable Care Act depicted the president's willingness to sacrifice his own position; he risked his 2012 re-election by refusing to back down from the Act. "He really didn't care about the politics," we are told. "He weighed the politics like any politician would. But at the end of the day, he was always willing to lose in order to do the right thing. Always."

The video linked the most significant achievements made during Obama's presidency — including the elimination of preexisting conditions discrimination in health insurance, equal pay for government employees, the resurrection of the auto industry, marriage equality, and the Iran nuclear agreement — with "a temperament associated with being president that he uniquely has — eyes always fix on long-term successes."

And, importantly, the video highlighted a characteristic we rarely see from presidents: vulnerability. Obama didn't hold back his tears when speaking before the nation on the Sandy Hook shooting, and openly expressed his frustration that he wasn't able to make significant headway on the issue of gun legislation. Obama's public appearances in the wake of this and other tragedies have shown us not only a president, but a man not immune to the devastation, pain, and sense of powerlessness any human being feels at times.

Obama has faced enormous challenges during his presidency, and, however you judge the way he has dealt with them, it's hard to deny the solidity of the president's character. "I just stay at it and I'm just gonna keep on staying at it as long as I'm in this office," Obama said. The video was a powerful tribute to the man who's been keeping at it.

More like this
What Is Barack Obama’s Net Worth? He Makes *Way* More Now As An Ex-President
By Hugh McIntyre
10 Times Diana & Meghan Spoke Similarly On The Royal Family
By Sophie McEvoy
How To Support Gun Control Reform Right Now
By Morgan Brinlee and Carolyn Steber
The Church Of Scotland Votes To Allow Same-Sex Marriages
By Sam Ramsden
Get Even More From Bustle — Sign Up For The Newsletter