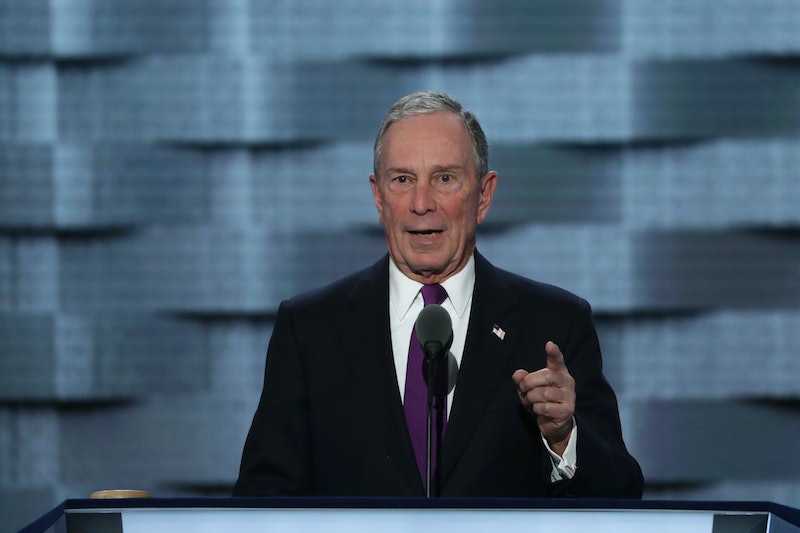 One of the more notable speakers at the Democratic National Convention was Michael Bloomberg. It was notable largely because conventions are intensely partisan events, and Bloomberg isn't a Democrat. He hasn't been once since 2001, when he switched his party affiliation to Republican, and now he's a registered independent. When he took the stage Wednesday evening, many wondered just what Bloomberg's DNC speech would look like.

While it is somewhat unusual for a non-Democrat to speak at a Democratic convention, there's a good case to be made for Bloomberg's inclusion this year. All things considered, the former three-term mayor of New York is ultimately a pragmatic centrist, a label that also describes Hillary Clinton. His signature issue is gun control, an animating issue for many Democrats, and he's spent millions of dollars advocating for stronger firearm regulations.

Furthermore, having a non-party member speak at a convention is a good way of illustrating inclusiveness, which has become something of an unofficial theme for this year's convention. This year, it could be helpful in picking up a few stray votes from Republicans who remain wary, or outright opposed, to Donald Trump.

Whether he pulled it off is up to the viewer, but in the meantime, here’s a transcript of Bloomberg’s DNC speech.

Kasim [Reed, mayor of Atlanta], thank you for that kind introduction. Let me thank all of you for welcoming an outsider here to deliver what will be an unconventional convention speech.

Now, I'm not here as a member of any party, or to endorse any party platform. I am here for one reason, and one reason only: to explain why I believe it is my imperative that we elect Hillary Clinton as the next president of the United States. And to ask you to join with me in supporting her this November.

When the Founding Fathers arrived here in Philadelphia to forge a new nation, they didn't come as Democrats or Republicans, or to nominate a presidential candidate. They came as patriots who feared party politics. I know how they felt. I've been a Democrat, I've been a Republican, and I eventually became an independent because I don't believe either party has a monopoly on good ideas or strong leadership.

When I enter the voting booth each time, I look at the candidate, not the party label. I have supported elected officials from both sides of the aisle. Probably not many people in this room can say that, but I know there are many watching at home who can. And now, they are carefully weighing their choices. I understand their dilemma.

There are times when I disagree with Hillary. But whatever our disagreements may be, I've come here to say: We must put them aside for the good of our country. And we must united around the candidate who can defeat a dangerous demagogue.

I believe it's the duty of all American citizens to make our voices heard by voting in this election. And, if you're not yet registered to vote, go online. Do it now. It's just too important to sit this out.

Now, we've heard a lot of talk in this campaign about needing a leader who understands business. I couldn't agree more. I've built a business and I didn't start it with a million-dollar check from my father. Because of my success in the private sector, I had the chance to run America's largest city for 12 years, governing in the wake of its greatest tragedy.

Today, as an independent, an entrepreneur, and a former mayor, I believe we need a president who is a problem solver, not a bomb thrower. Someone who can bring members of Congress together, to get things done. And I know Hillary Clinton can do that because I saw it firsthand.

I was elected mayor two months after 9/11, as a Republican — and I saw how Hillary Clinton worked with Republicans in Washington to ensure that New York got the help it needed to recover and rebuild. Throughout her time in the Senate, we didn't always agree — but she always listened. And that's the kind of approach we need in Washington today, and it just has to start in the White House.

Given my background, I've often encouraged business leaders to run for office because many of them share that same pragmatic approach to building consensus, but not all. Most of us who have created a business know that we're only as good as the way our employees, clients, and partners view us. Most of us don't pretend that we're smart enough to make every big decision by ourselves. And most of us who have our names on the door know that we're only as good as our word. But not Donald Trump.

Throughout his career, Trump has left behind a well-documented record of bankruptcies, thousands of lawsuits, angry shareholders, and contractors who feel cheated, and disillusioned customers who feel ripped off. Trump says he wants to run the nation like he's run his business. God help us.

I'm a New Yorker, and New Yorkers know a con when we see one! Trump says he'll punish manufacturers that move to Mexico or China, but the clothes he sells are made overseas in low-wage factories. He says he wants to put Americans back to work, but he games the US visa system so he can hire temporary foreign workers at low wages. He says he wants to deport 11 million undocumented people, but he seems to have no problem in hiring them. What'd I miss here?!

I understand the appeal of a businessman president. But Trump's business plan is a disaster in the making. He would make it harder for small businesses to compete, do great damage to our economy, threaten the retirement savings of millions of Americans, lead to greater debt and more unemployment, erode our influence in the world, and make our communities less safe.

The bottom line is: Trump is a risky, reckless, and radical choice. And we can't afford to make that choice.

Now, I know Hillary Clinton is not flawless; no candidate is. But she is the right choice — and the responsible choice — in this election. No matter what you may think about her politics or her record, Hillary Clinton understands that this is not reality television; this is reality. She understands the job of president. It involves finding solutions, not pointing fingers, and offering hope, not stoking fear.

Over the course of our country's proud history, we have faced our share of grave challenges, but we have never retreated in fear. Never. Not here in Philadelphia in 1996, not at Gettysburg in 1863, not through two World Wars and a Great Depression, not at Selma or Stonewall, and not after 9/11 — and we must not start now.

America is the greatest country on Earth — and when people vote with their feet, they come here. The presidency of the United States is the most powerful office in the world, and so I say to my fellow independents: Your vote matters now. Your vote will determine the future of your job, your business, and our future together as a country.

There is no doubt in my mind that Hillary Clinton is the right choice this November. So tonight, as an independent, I am asking you to join with me — not out of party loyalty but out of love of country. And together, let's elect Hillary Clinton as the next president of the greatest country in the world, the United States of America.

All things told, it was a pretty effective speech, and the Democrats in the audience received it very well. Not bad for someone who's not even a Democratic.