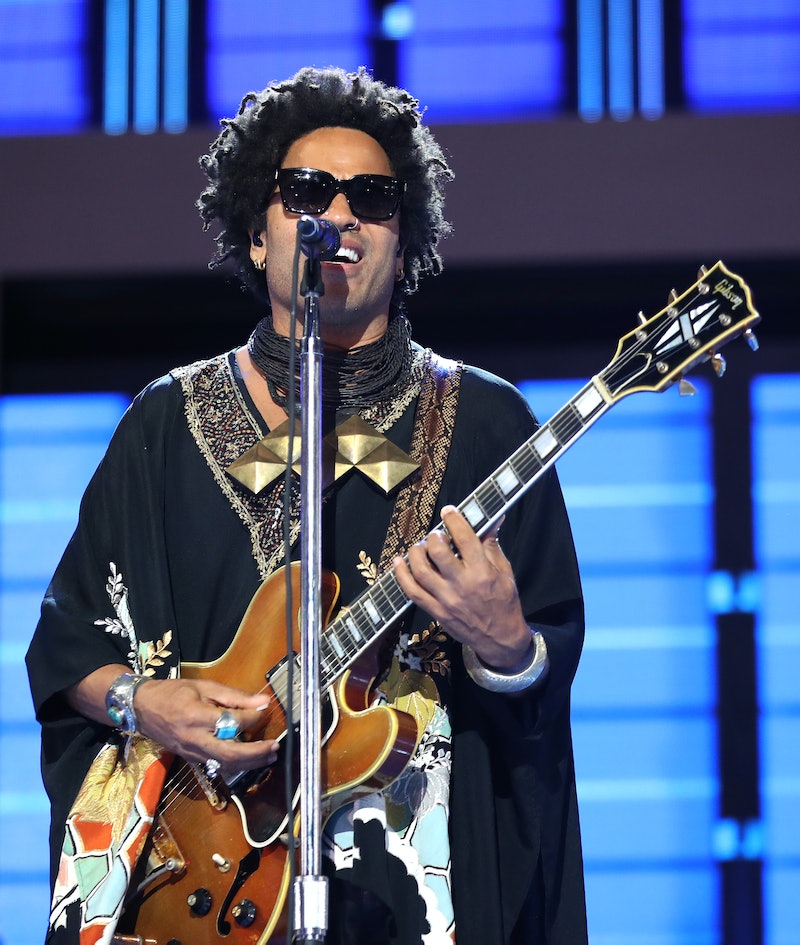 Part of the reason parties hold conventions is to reward the dedicated volunteers and grassroots activists that helped make the elections happen in the first place. One of those biggest rewards was getting to watch Lenny Kravitz's performance at the Democratic National Convention. In addition to keeping the crowd entertained in the midst of the numerous political speeches, the rocker sent an important message: love can win.

Kravitz took the stage in the Wells Fargo Arena in Philadelphia on the third day of the convention. Before former New York City Mayor Michael Bloomberg was to give his remarks, Kravitz performed his 1989 hit single "Let Love Rule" to an enthusiastic, amped-up crowd. The song, written during the waning days of the Cold War, was a powerful and provocative call for peace and understanding. In this venue, however, it took on a slightly different meaning. While the divide between the Clinton camp and the Sanders camp isn't quite as deep as the divide between the U.S.A. and the U.S.S.R. was back in the day, there is still a considerable amount of distrust between the two sides of the Democratic Party.

This was Kravitz's second performance at the DNC. Earlier on Wednesday during the sound check, a few lucky Dems and arena staff were treated to an impromptu concert by the four-time Grammy award winning artist before the convention became crowded.

According to The Philadelphia Inquirer, this won't be the musician's only performance this week for members of the Democratic Party. Kravitz is scheduled to perform at the "Camden Rising" event at the BB&T Pavilion just across the Delaware River on Thursday afternoon. Other acts scheduled to make an appearance include Lady Gaga and DJ Jazzy Jeff. President Barack Obama and First Lady Michelle Obama are said to be making an appearance, along with the Democratic nominee and her husband, former President Bill Clinton. Vice President Biden and Dr. Jill Biden are also planning on being in attendance at the invite-only show.

Despite the discontent from some of the convention attendees at their political defeat, Kravitz's performance — along with an entire choir of live backup singers and a pretty kicking band — was well received by the convention crowd, and energized everyone for the next major speaker, Tim Kaine.

Despite the warm reception by the delegates, volunteers, party functionaries, and leaders at the Wells Fargo Arena, Clinton's campaign will have to wait and see if love will actually rule within the Democratic Party, and the country as a whole, come general election season.

More like this
What Is Barack Obama’s Net Worth? He Makes *Way* More Now As An Ex-President
By Hugh McIntyre
Tom Cruise Gives His Honest Review Of Lady Gaga’s New Song For 'Top Gun: Maverick'
By Hugh McIntyre
President Zelensky Spoke Out On Ukraine's Chances Of Hosting Eurovision Next Year
By Sam Ramsden
Celebrities & President Biden Are Enraged By The Leaked Roe v. Wade Decision
By Alyssa Lapid
Get Even More From Bustle — Sign Up For The Newsletter