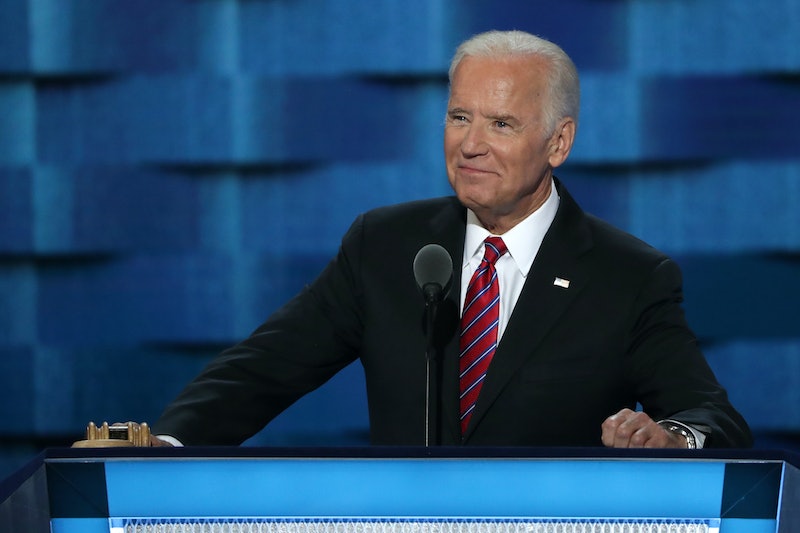 After a short, but moving introduction from Dr. Jill Biden at the Democratic National Convention in Philadelphia, Vice President Joe Biden's long history of public service was on display at the DNC in a short film produced for the convention.

The six-and-a-half minute video was a moving tribute to the former senator's years in Congress and tenure as President Obama's veep. As one of the youngest senators ever elected, Biden spent 36 years representing the people of Delaware before moving to the Executive Branch of government.

The overarching theme of the short film was to highlight Biden's role as America's unofficial moral compass during his tenure in public service. Speaking to his work fighting the NRA, being a leading supporter gay marriage in the current administration, fighting for a "moonshot" to cure cancer, and taking care of veterans.

Featured prominently in the video was Biden's efforts to spearhead a change in rape culture on college campuses: "Let's change the culture so that no abused woman or man feel like they have to ask themselves 'What did I do?' They did nothing wrong."

"His has been a career defined by honesty, passion, and conviction. He's forced us all to look deep in our souls and ask 'Is this who we are as a nation?' and, perhaps more importantly, 'is this who we want to be?' says the narrator in a voice over as photos of the Vice President Biden meeting with police, soldiers, an elderly couple, and small children wearing football jerseys. Check out the entire video below.

Biden's long record of changemaking in the Senate and as Vice President has earned him a place in the pantheon of strong liberal advocates from the Northeast in the tradition of Ted Kennedy and Paul Tsongas. While it isn't clear what the future has in store for the vice president and his family, he can certainly look back on his long career and know that he helped make a positive impact on American society.

From his work fighting against domestic and sexual violence, to advocating for the rights of veterans, to spearheading the Obama Administration's initiative to find a cure for the disease that claimed the life of his son, Beau, Biden has been a stalwart advocate for Americans who need one. With the kind of dedication he has shown to public service, it is likely that Biden will continue as an advocate for the American people in some capacity.

More like this
What Is Barack Obama’s Net Worth? He Makes *Way* More Now As An Ex-President
By Hugh McIntyre
Celebrities & President Biden Are Enraged By The Leaked Roe v. Wade Decision
By Alyssa Lapid
How To Fight For Reproductive Rights, Based On How Much Time You Have
By Courtney Young
LGBT+ Men Fleeing Afghanistan Were Denied Asylum By The Home Office, New Findings Show
By Sam Ramsden
Get Even More From Bustle — Sign Up For The Newsletter