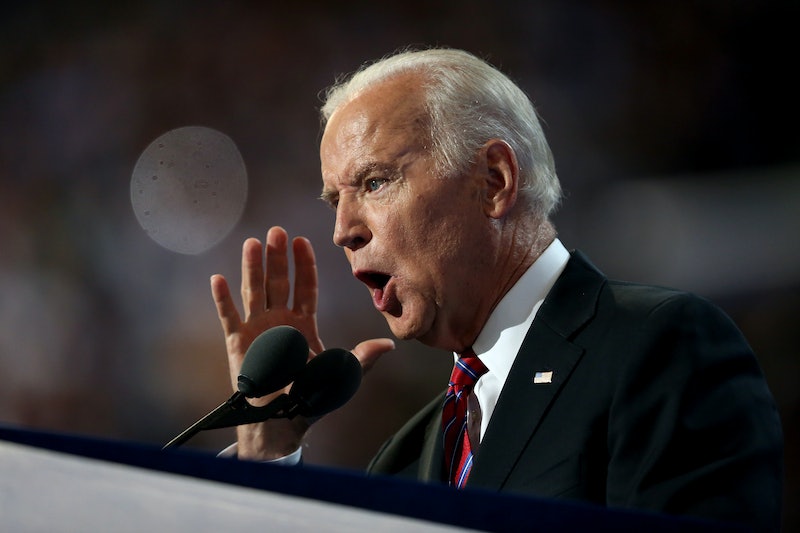 The Democratic National Convention is in full swing, and unsurprisingly, one of the most well-received, enthusiastic speeches of the event came from Vice President Joe Biden, who spoke on Wednesday night. If nothing else, Biden proved beyond a shadow of a doubt that he's still one of the most charismatic and compelling speakers in American politics, and judging by the crowd's reaction, Democrats agree. He's also a constant source of humor, and the Joe Biden DNC speech memes started rolling out before he was even done.

Biden came very close to launching his own presidential bid in 2016, and the ecstatic reception he received at the DNC surely has some Democrats wishing he'd jumped into the fray. But presidential campaigns tend to change the public's perception of a politicians, and not for the better. It's possible and likely that Biden wouldn't be nearly as well-liked now if he had been running a presidential campaign for the last year.

The vice president gave a booming defense of Hillary Clinton on Wednesday and, just as importantly, a scorching indictment of Donald Trump. "He has no clue what makes America great," Biden said. "Actually, he has no clue, period." The audience ate it up, and the memes quickly followed. Here are some of the best.

Biden, of course, has been providing fodder for comedians for just about his entire vice presidency. His relentless optimism, goofy-old-uncle demeanor and occasionally risque sense of humor have given him a reputation as the White House's clown prince (despite his significant role in crafting policy), and The Onion has practically built its own sub-brand around its only-slightly-exaggerated depiction of Biden.

Biden's speech may well turn out to be one of the most memorable of the DNC. Despite the lingering disunity between supporters of Bernie Sanders and the rest of the Democratic Party, there were no boos to be heard when Biden spoke in support of Clinton. Here's hoping that Biden will continue to be subject to meme-age and satire long after he's left the White House.