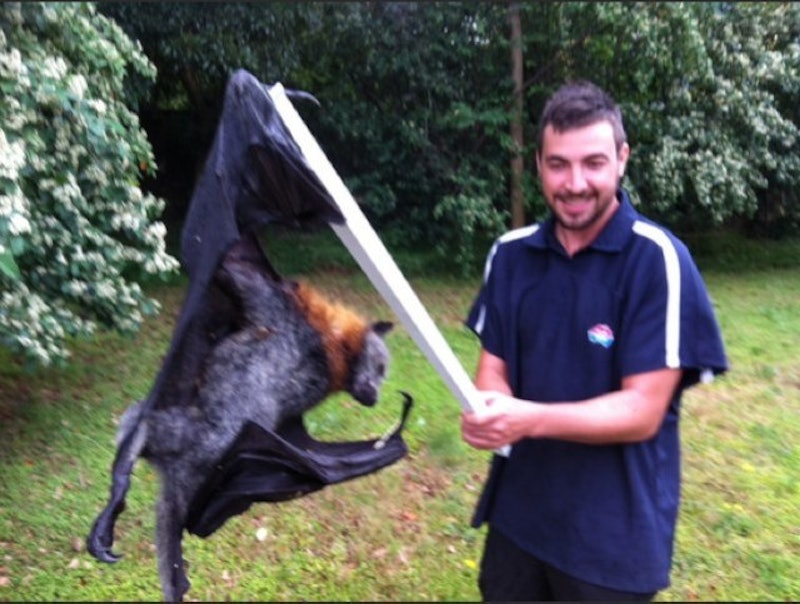 Turns out there are scarier things out there than the calories on Outback Steakhouse's menu. On Friday, this image from an Australian began to make the Internet rounds, sending Redditors into a frenzy and all of us indoors. "My friend woke up to this thing fighting his dogs," Redditor treemonkey18 wrote along with his post picturing what many are labeling a black flying fox, known as one of the largest bats in the world. (See the full image below to marvel at the size of that thing.)

Is it real? Perhaps. Is the animal really that large? Unclear — objects placed close to the camera could be smaller than they appear, but a black flying fox's wingspan does measure one meter, or three feet for those of us stateside. Is it terrifying? Well, that would be a most definite yes, regardless of the photo's authenticity. But as much as one could respect Australia's supposed bat slayer (or his friend's bat-slaying dogs) for defeating such an intimidating foe, it's easy to look at the downside in this image: Frightening or no, the black flying fox species do suffer from a low birth rate, leading them dangerously close to endangered status. And, really, this creature is far too badass to be ridden from this Earth.

But this is just the latest terror that Australia has faced this week. On Wednesday, an "apocalyptic" storm rolled over Sydney, casting an eerie shadow on the city that Instagram aficionados' dreams are made of.

Definitely not what you'd expect hearing Thunder From Down Under.