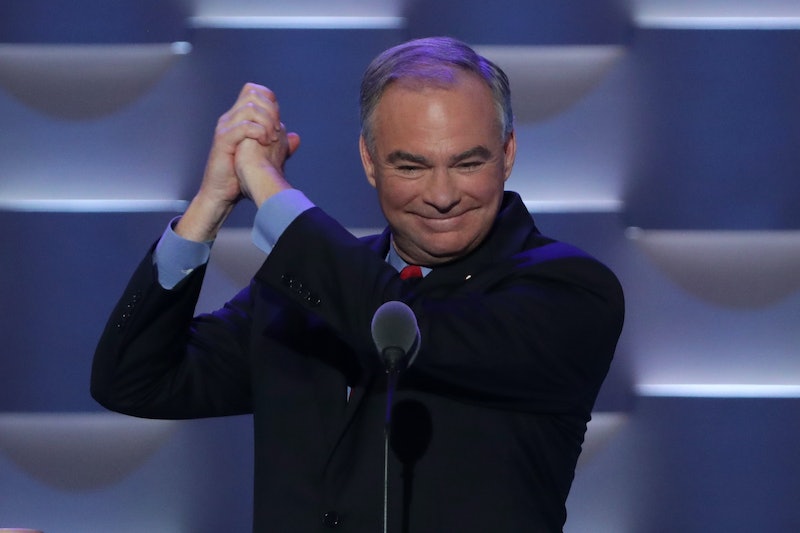 With the junior senator from Virginia rising to national prominence as Hillary Clinton's choice for vice president, it's only natural that people have started looking into his past. And if the chatter on Twitter is any indication, the internet likes what it sees. After he made his speech at the Democratic National Convention, these hot young photos of Tim Kaine surfaced. And they may very well break the internet — well, the corner of it that cares about politics, anyway. And believe me, you will definitely do a double take.

While it may not be readily apparent now, Kaine had it going on back in the day, and Twitter has been having a field day scouring the web for archive photos. Kaine was born in Saint Paul, Minnesota, and grew up in the Kansas City, Missouri area. His dad was a welder who ran his own shop, and his mom was a home economics teacher. After graduating from a Jesuit college prep school, Kaine attended the University of Missouri in Columbia, before going on to Harvard Law. Since then, he's maintained a special interest in social justice issues, which may add to the hotness factor of his younger photos. Check out some of those pictures from Twitter:

Kaine took a gap year after his first year at Harvard Law to volunteer as a missionary with the Jesuits in El Progreso, Honduras. There, he made use of his welding and carpentry skills, while learning Spanish from the locals. He met his future wife, classmate Anne Holton, when he returned from Honduras to Harvard, and then proceeded to start a family. Fair warning: Some of the photos of Kaine as a young dad with his kids are almost too adorable.

While being pretty ridiculously good-looking shouldn't be (and definitely isn't) a necessary prerequisite to run for public office, it certainly doesn't hurt. And in Kaine's case, being married to the daughter of former Virginia governor A. Linwood Holton Jr. probably helped his political career even more than his appearance did. But even without his rakish looks, Kaine is a political force with which to be reckoned. In moving from being the mayor of Richmond, Virginia's capital, to the Governor's Mansion, to the Senate, Kaine clearly has demonstrated that he has the political chops necessary to fill out the rest of the Democratic presidential ticket. Whether he'll continue his rise and move into the Naval Observatory in January depends on whether the Democrats are able to outmaneuver Donald Trump, Mike Pence, and the new version of the GOP.