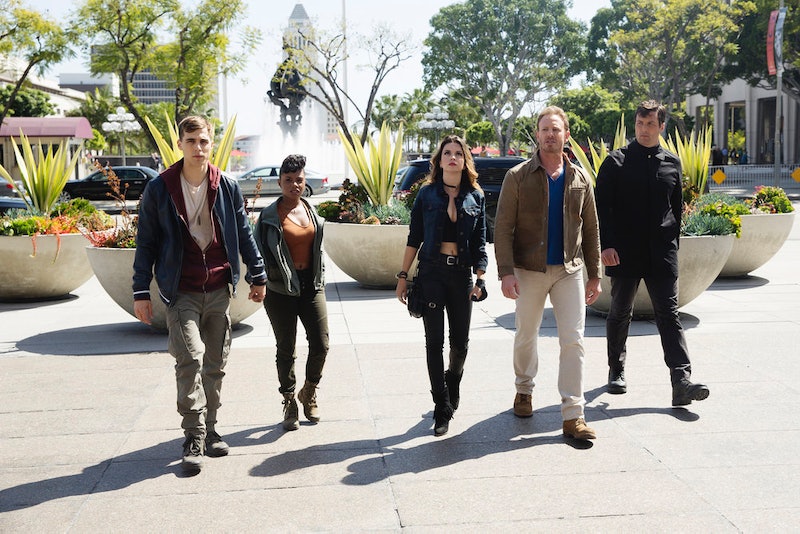 It's the middle of summer and you know what that means — it's time for another Sharknado movie. The fourth installment in the campy and wildly popular SyFy movie series premiered on Sunday night and it's filled with everything you could ever want: Sharks, sharks in tornadoes, other different kinds of tornados, and so many celebrity cameos. I have kept track of every celebrity cameo in Sharknado 4: The 4th Awakens so you don't have to, because it's a long list of people who have come along for this Sharknado adventure.

Since the first Sharknado captivated viewers 2013, Finn Shepard (played Ian Ziering) has stepped up to help save the world from aggressive sharks hellbent on making landfall in killer twisters that threaten us all. The campy sequels have brought Finn, his trusty chainsaw, and his family to New York City, Washington, D.C., and all over the country. Along the way, they've encountered many famous faces, who have either played themselves (hello, Al Roker) or have taken on the role of someone very different (hello, Stacey Dash as the mayor of Chicago). And in this fourth iteration of the outrageous SyFy movie series, the list of celebs goes on and on and on. (Just keep in mind that recognizing all of these celebs might require a little bit of a memory jog. It's not exactly like Kanye West is showing up to fend off sharks.)

The notoriously out-there actor plays April's father, who has rehabbed April and pretty much turned her into Iron Woman.

The YouTube Star appears in the movie as a train conductor.

The Vegas funnyman shows up in flick as an Uber driver.

These fine men play themselves.

The Today Show host/weatherman plays himself and provides Sharknado exposition as the movie spins along.

The Today Show anchor reports alongside Roker, but with an eye patch.

The YouTube/Vine star appears in the movie as a National Guardsman.

The Biggest Loser trainer also takes on the role as a trainer in Sharknado 4.

The Real Housewives of Beverly Hills star (on the left above) appears as Tech Frances.

The comedian with that famous unique voice is Today Show correspondent Storm Chaser Ron in the Sharknado universe.

Everyone's favorite '90s actor appears in Sharknado 4 as Colton, an old friend of Finn's and the owner of a maybe-creepy car named Christine.

The YouTube Star appears in the movie as Supervisor Brock.

The Vanderpump Rules star makes an appearance as Koening.

The Vanderpump Rules star takes on the role of a Guardsman.

David Letterman's former The Late Show bandleader has a cameo as himself.

The Real Housewives of Atlanta star is among the Astro-X rocket scientists and astrophysicists.

This businessman trades Shark Tank for science as one of the Astro-X rocket scientists and astrophysicists.

The professional dancer from Dancing with the Stars is among the Astro-X rocket scientists and astrophysicists.

The TV host plays one of the Astro-X rocket scientists and astrophysicists.

The In Living Color actor is one of the Astro-X rocket scientists and astrophysicists.

These Baywatch actors reunited with former co-star Hasselhoff as Astro-X rocket scientists and astrophysicists in Sharknado 4.

Dog the Bounty Hunter makes an appearance as a chainsaw dealer. Because Finn loves his chainsaws.

The outspoken Clueless actor plays the Mayor of Chicago, who happens to really have it out for Finn.

The Rascal Flatts band member appears as Zimmerman, the manager of the Shark World hotel in the movie.

The Married with Children actor plays a Las Vegas gambler.

The MMA fighter flexes his strength as head of security for the Shark World hotel.

The Las Vegas personality appears as himself, because you seriously can't make a movie set in Sin City without him.

The Chrisley Knows Best stars show up as themselves.

The Loveline host takes on the role as the pastor who marries Matt and Gabby as they skydive into a Sharknado.

The Millionaire Matchmaker star appears in Sharknado 4 as a reporter.

The lead singer of Slipknot plays a Shark World hotel security guard in the flick.

More like this
Lindsay Lohan Just Recalled A Hilarious 'Parent Trap' Story
By Sam Ramsden
The First Trailer For 'That '90s Show' Includes So Many Nods To The Original Series
By Jack Irvin, Alyssa Lapid and Grace Wehniainen
Jodie Turner-Smith & Joshua Jackson's Relationship Timeline Includes Her Proposing
By Jake Viswanath
'Bridgerton' & 'Succession' Casts Join Forces For A New Dickens Adaptation
By Darshita Goyal
Get Even More From Bustle — Sign Up For The Newsletter