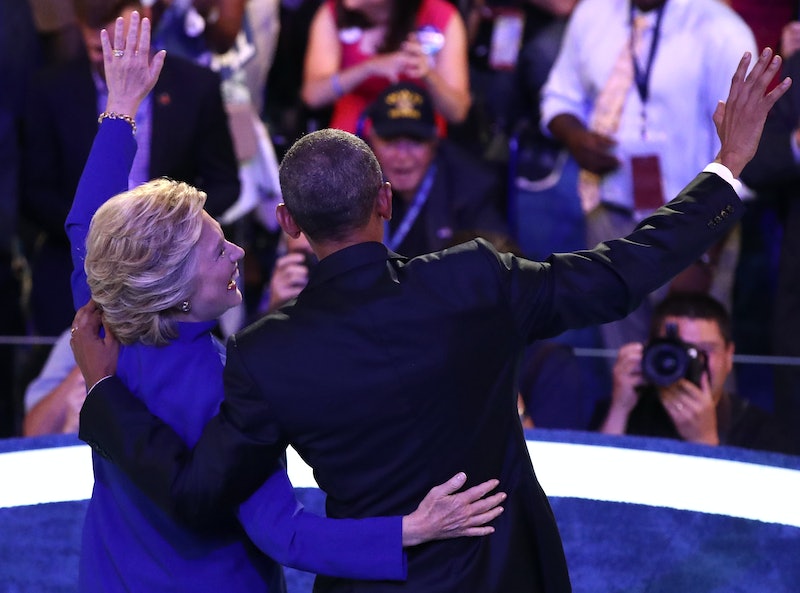 On Wednesday, President Obama delivered the message that Democrats needed to hear after the long, protracted battle for their presidential nomination. "If you’re serious about our democracy, you can’t afford to stay home just because she might not align with you on every issue," he told the crowd. "You’ve got to get in the arena with her. Because democracy isn’t a spectator sport. America isn’t about 'Yes he will.' It’s about 'Yes we can.' And we’re going to carry Hillary to victory this fall, because that’s what the moment demands." So, not surprisingly, Hillary had a message for Obama after the speech.

"We love you back, @POTUS," her team wrote on Twitter. They echoed Obama's own words from the beginning of his speech. The crowd was going wild, chanting "Yes, we can." When one delegate screamed, "I love you!" Obama responded, "I love you back." Well, Clinton's team must be riding high after the forceful endorsement the president offered. And what an endorsement it was:

There is only one candidate in this race who believes in that future, and has devoted her life to it. A mother and grandmother who’d do anything to help our children thrive. A leader with real plans to break down barriers, blast through glass ceilings, and widen the circle of opportunity to every single American: the next president of the United States, Hillary Clinton.

Obama started by referencing their own face-off eight years ago. According to him, she was quite the formidable opponent:

We battled for a year and a half. Let me tell you, it was tough, because Hillary’s tough. I was worn out. She was doing everything I was doing, but just like Ginger Rogers; it was backward in heels. And every time I thought I might have had the race won, Hillary just came back stronger.

From there, he moved on to choosing to work with her. Clinton served as Obama's secretary of state during his first term. "And for four years, I had a front-row seat to her intelligence, her judgment, and her discipline," Obama told the crowd. And he said he realized why she was so driven, too — not for attention or success, but because "she was in this for everyone who needs a champion."

But the reasons don't stop there. There is the experience she brings from her days fresh out of law school through her time as senator of New York and secretary of state which explain why Clinton is the right choice — and the most qualified candidate — for president. He went over all the things she would make happen, too:

Hillary has real plans to address the concerns she’s heard from you on the campaign trail. She’s got specific ideas to invest in new jobs, to help workers share in their company’s profits, to help put kids in preschool, and put students through college without taking on a ton of debt. That’s what leaders do.

With this kind of endorsement, it's no wonder that Clinton loves Obama back. Under Obama, amazing progress was made these past eight years. And he's with her for the next eight.

Look forward to an even bigger thank you from Clinton on Thursday.