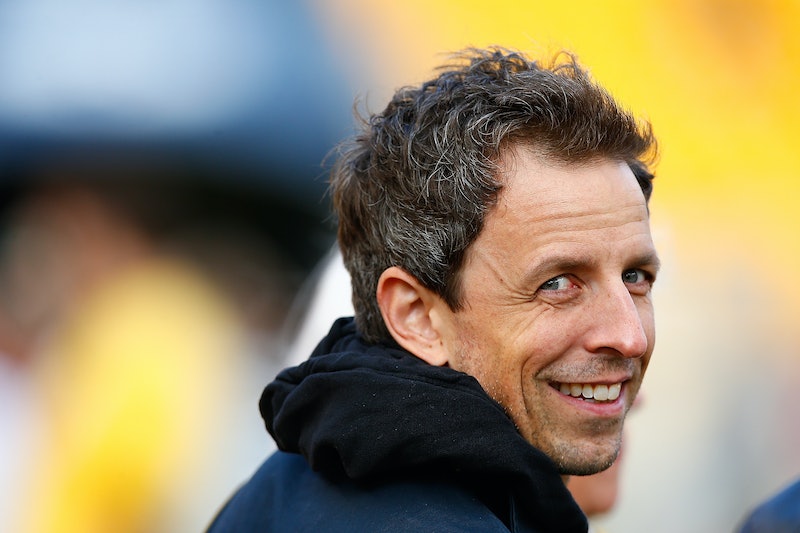 Anyone who has tuned in to the Democratic National Convention this week has heard the booing. Members of the crowd have booed speakers from Elizabeth Warren to Sarah Silverman as they've taken to the stage to endorse Hillary Clinton. So who's doing all this booing at the DNC? There are multiple groups, but the "Bernie or bust-ers" are chief among them. Certain die-hard Bernie Sanders supporters are refusing to support Hillary Clinton, saying that they'll only cast a ballot for Sanders in November (even though Sanders lost the primaries, and is not the Democratic presidential nominee — oh, and Sanders already endorsed Clinton himself). Well, in a special segment of Late Night this week, Seth Meyers slammed the "Bernie or bust-ers" who have been booing at the convention, telling them, "Now is the time to be quiet!"

In a Tuesday Late Night segment called "Hey!" Meyers addressed the "Bernie or bust-ers," saying, "Look I know you’re 'Bernie or bust,' but the results are in. Bust won." However, Meyers wasn't just chastising the booing people for being sore losers. Instead, the Late Night host told the hardcore Sanders supporters that with Donald Trump as the GOP nominee, the stakes are just too high to keep protesting Clinton's nomination. Meyers continued, "We don’t have time for this... We’re on the cusp of electing a racist demagogue, and that never ends well."

Meyers also addressed any Sanders supporters who deny that their refusal to support Clinton will lead to Donald Trump being elected, since they don't know anyone who would actually vote for the GOP nominee. The Late Night host reminded them that their "yoga classes" and "drum circles" are not representative of the United States. In fact, according to Meyers, America is "48 percent crazy uncles." And the "crazy uncles" are definitely voting for Trump.

Finally, Meyers explained that the "Bernie or bust-ers" are making life difficult for Sanders himself: "Because of you, Bernie is going to have to campaign for Hillary every day until election day, and he shouldn't have to do that." According to the Late Night host, if it wasn't for all these Sanders supporters who refuse to back Clinton, the Vermont senator could be on a much-needed vacation right now.

Meyers didn't only chastise the Sanders supporters; he praised them, too. "Your passion changed the Democratic Party, and that is no small thing. You should be proud of yourselves," he said. Of course, he then added, "You have to be quiet now. Now is the time to be quiet!" Essentially, stop booing at the DNC — and vote for Hillary Clinton.

There's one night more night of the DNC, so we'll have to wait and see if Meyers' message stuck. Will the "Bernie or bust-ers" keep on booing?