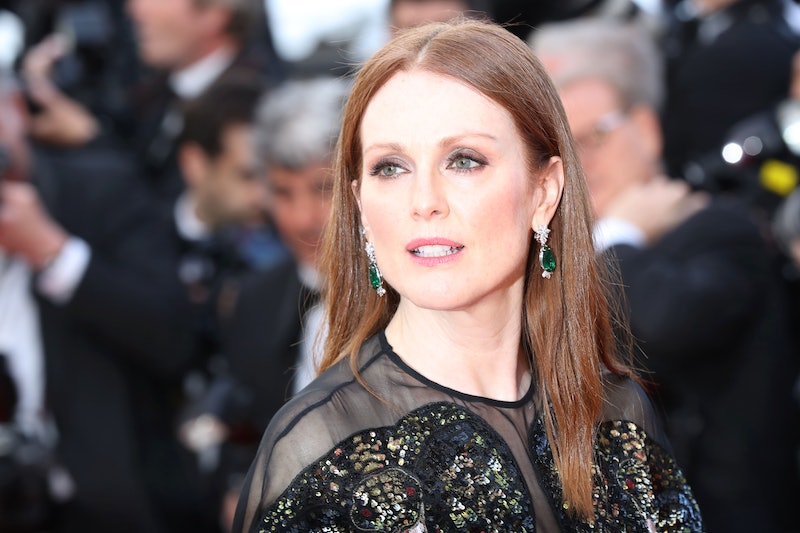 Changing your hair color is one of the easiest ways to instantly amp up your entire look. Seemingly competing to stay relevant and up-to-date with the trends, celebs frequently give their 'dos some makeovers. However, there are plenty of celebrities who don't dye their hair. Unlike their dye-crazed counterparts, they have a signature hue and they stick with it.

If there was an award given to stars who never change their look, very few would qualify. Far too many celebs update their hair color like they change their clothes. Just think of Katy Perry or Lady Gaga. But who can blame them when there are so many famous humans who can thank their hair for jumpstarting their careers? Emma Stone's signature red hair helped her land big movie deals when she decided to undergo a change. And Olivia Wilde even went from being the typecast blonde "hot chick" to getting more serious roles when she became a dark brunette.

There are a lot of celebs whose iconic natural locks have helped make them the stars they are today, too. Just as some A-listers are known for undergoing dramatic hair transformations, some have a made a name for themselves by never switching up their look. Some say that if isn't broken, don't fix it. Well, these 11 celebs know the saying to be true, because they refuse to dye their manes.

The former Simple Life star is known for her golden locks. Heiress Paris Hilton has always been a blonde bombshell and has never had any intentions of changing her signature color.

In an interview with Marie Claire in May 2016, she divulged, "I'm blonde and I love it. I've never dyed my hair dark." If you've seen the socialite as a brunette, she was definitely wearing a wig.

"I’ll sometimes wear a wig when I’m somewhere with lots of people, such as Disneyland. It’s fun to be able to change my hair color without worrying about the damage," she added.

We may as well call her a real life Jessica Rabbit, because red hair is her thing and she wears it well. While many celebrity redheads are faking it, Chastain is keeping it real with her 'do. And she doesn't plan on changing her rare locks.

She told InStyle in 2013 that she didn't like her red hair as a child because it made her different. But now she wears the color like a "badge of honor." When roles call for a blonde 'do, you can guarantee that she's wigging it. Way to embrace your uniqueness, girl.

Tracee Ellis Ross' big curls alone are enough to make her famous. In early 2012, we saw her with colored locks for the first time when she gave her a 'do a chop and dyed it a rustic red. So I guess you could say that she has technically changed her hair before. But, well, it was a one time thing.

In an interview with Essence, she revealed that her obsession with Lucille Ball sparked her interest in red hair. However, the color just wasn't the thing for her. In the end, she said, "I loved it, but truthfully I am at heart with what God naturally gave me," said Ross. "I just feel more comfortable [in my natural hair color] so I went back to it." Sounds like she won't be dyeing her mane again anytime soon.

Perhaps the most famous ginger of them all is actor Julianne Moore. Red hair runs deeps through this beauty's DNA, because she even passed it down to her daughter. When asked by Redbook Magazine in 2014 whether she colors her hair, she said, "I didn't start until about five years ago, when some grays came in. There's a spot in the front of my head that, if I left it alone, would be a gray streak. I'm not ready for that yet!"

As for dyeing her hair a completely different color? I don't think we'll be seeing her tresses made over that drastically. "I got blonde highlights in my 30s, but I didn't like how they looked," Moore said. Sometimes natural is simply better.

OK, hear me out on this one. Has Nicki Minaj tried every hair color imaginable? Yes! Is she truly dyeing her hair, though? Not quite!

If you weren't already aware, Minaj loves to wear wigs. And now that she's been rocking her natural hair a bunch, we've been able to fall in love with her sleek, black tresses. In a 2014 interview with Cosmopolitan, Minaj's stylist revealed that the singer is more concerned with natural hair and toned-down looks these days.

If there's once celeb who's not embarrassed by the thought of one day becoming a silver fox, it's this one. Stylist Stacy London has rocked a gray streak for years, and it has become a trademark for her. If you think she'd ever have it colored, guess again.

In 2012, she told the New York Times, “I never tried to hide it." During her years as a spokeswoman for Pantene, she even had a clause in her contract that said she wouldn't do so. When she let her stylist update her look with an ombré dye job, London even kept the gray streak perfectly untouched.

You may be starting to notice that redheads often have a special bond with their fiery tresses. And Ed Sheeran is yet another ginger who refuses to let go of his signature red mane.

In 2011, Sheeran told The Daily Record, “I’ve only got a few unique selling points and red hair is a big unique selling point. I’d never get rid of it.” He wasn't too fond of his manager suggesting he add in blonde highlights, so it looks like we'll get to continue enjoying his red locks for years to come.

I can't imagine Lucy Liu without her long, dark hair. Although we've seen her switch up her style through cuts before, this dark-haired beauty has maintained her deep hue throughout the years.

Speaking to InStyle and as reported by CNN, Liu made it clear she doesn't have plans to alter her hair color. "My hair is so dark that I'd have to bleach it to add color, so I never dye it," said Liu. With all the chemical damage that can come from bleaching your hair, I can understand the reluctance.

This natural-haired beauty is all about keeping her curly coif healthy. Of course, Kimberly Elise once joined the long list of celebs who dye their hair on the regular. She divulged to Essence that she dyed her hair every color one could imagine, leading to excessive damage and breakage.

The star now rocks the curly mane she was given at birth, though. "Around 2000, after years of color, relaxers, weaves, you name it, I had finally had enough," said Elise. "I had enough of the burning scalp and scabs on my ears. I stopped putting chemicals in my hair altogether and went back to wearing a press-and-curl and would add in extensions for different styles." Who needs hair dye when you've got extensions?

If you have no idea who Cassandra Peterson is, it's probably because you're so used to seeing her with a face full of makeup and jet-black locks flowing from a beehive up-do. That's because she's best known for portraying the Mistress Of The Dark, Elvira.

But there was no way she was going to dye her ginger hair just to embody the famous horror host. When she was told that she would need black hair to be Elvira, she didn't look to dye for a solution. In a 2014 Den Of Geek interview, Peterson revealed that she was not going to dye her red hair. It looks like all she needed was a good wig to play the dark mistress, after all.

So, Ashley Tisdale has tried red hair, a dark brown hue, and every color in between, but there is one color she refuses to dye her hair. She told Teen Vogue in 2015 that she draws the line at black. “That’s actually one [color] I haven’t done, but don’t think I’ll ever go there," said Tisdale.

I imagine she could pull it off, just as she has with every other style she has tried. But if black isn't for you, I fully support your decision, Ash.

While many celebs push the envelope with the wildest manes we've ever seen, I can respect the ones who have maintained the same look throughout their careers. How they resist the temptation to color their locks, I will never understand. I'm personally one to transform my hairstyle and hue every three months or so. But I guess you can't have a "signature" look if you're constantly changing your hairstyle, right?