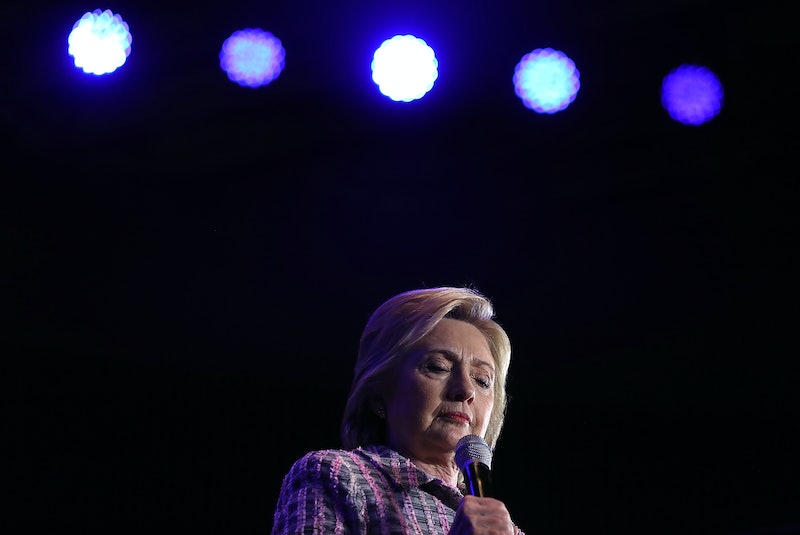 Hillary Clinton is not an easy politician to love. Even after Clinton made history by becoming the first woman nominated for president by a major party — by a margin of nearly a thousand delegates and millions of votes, I might add — people right, center, and left still struggle to support her.

Barack Obama is, by contrast, easy to love. He’s charming, he’s handsome, and he can deliver a political speech with the ease and grace of a preacher. The only person with more charisma and gravitas who has spoken at the Philadelphia convention this year is his wife, Michelle.

After the President’s barn-burner (and tearjerker) of a speech Wednesday night, many are wringing their hands over whether or not Clinton will rise to the occasion when she accepts the nomination at Thursday night’s proceedings in Philadelphia. If the greatest fears of the left (and, frankly, portions of the right) are realized and Donald Trump wins the election in November, some politicos will lay the blame squarely at Clinton’s impersonal, don’t-want-to-have-a-beer-with-her feet. People have been ready for her to fail since they started saying it was inevitable she’d win — both in 2008 and in 2016. It’s has to be a strange sensation, both being your country’s last best hope against political apocalypse and knowing that many on your side are already disappointed that you’re their savior.

In spite of all this, I love Hillary Clinton.

Let me be clear: I love Hillary Clinton as a politician (though there’s a fair amount of anecdotal evidence to suggest that if I ever get to meet her, I would like her as a person, too). I appreciate her political skill set the way I appreciate the abilities of a sewage maintenance worker: It’s dirty work, and I have no desire to do it myself, but I know that it is necessary to a functioning society.

On Thursday morning, I read an article in Slate in which staffers detail their varying feelings regarding Clinton’s nomination and possible presidency.

Senior editor Gabriel Roth relates phrasing the “objectively terrifying” election to his five-year-old daughter as a victory for women, and then says, “It allows me to experience this whole dumb, compromised, largely hopeless political moment as a happy little cartoon of progress for a few minutes.” Rachel Larimore, another senior editor, makes the flat comparison, “It’s heartwarming to know that, finally, in 2016, it’s just as possible for a corrupt, egomaniacal, divisive, scandal-plagued woman to earn her party’s nomination as it is for a corrupt, egomaniacal, divisive, scandal-plagued man.”

Copy editor Abi McIntyre’s blurb reads, “She’s not my ideal candidate, so it’s been really hard to get revved up for her candidacy, but nevertheless, I think she’s eminently qualified for the presidency and can’t wait to see her in the Oval Office.”

I wonder: Who is this “ideal candidate” that Clinton resignees seem to be waiting for, as if they’d ordered a filet mignon off the menu and the waiter brought them a Whopper? (Politics, I'd remind them, is more Burger King then Four Seasons.) Is it Vermont Senator Bernie Sanders, who, while doing much better in the primaries than anyone expected, had few supporters within the political machine, and whose answer to most policy questions was that a fabled “millions” would rise up and dominate not only the presidency but the House and Senate as well?

Or perhaps Massachusetts Senator Elizabeth Warren, despite her insistence on finishing out her Senate term and being much more interested in domestic economic issues than foreign policy ones?

Or maybe they’re just looking for that feeling Barack Obama gave them in 2008. The pretty, polished orator who was thick with feelz but thin on experience, who opposed gay marriage at the time and had conveniently not been in the Senate during the roll call on the Iraq War. The man who could move us to tears (and still can) but who lacked the negotiation skills to move an intractable and hostile Congress.

As a great admirer of Obama myself (not to mention someone who benefited hugely from Obamacare), I find myself unable to look back on his presidency with a wholly uncritical eye. It’s not just the stalled legislation, the inefficacy on gun control, or the problematic stance toward drones and state secrets and spying. It’s a notion that Norman Mailer inked in his book about the 1968 Republican and Democratic conventions, Miami and the Siege of Chicago. In describing his hope for the candidacy of Bobby Kennedy, Mailer wrote, “The Kennedys had seemed magical because they were a little better than they should have been, and so gave promise of making America a little better than it ought to be.”

Obama was too virtuous for this political system, created out of an outdated electoral process, a insatiable media, and a mostly-apathetic populace that rallied to keep him in the White House but abandoned him in the midterms — which he subtly reminded us about in his speech Wednesday night.

Hillary Clinton may be a lot of things, but “too virtuous” is not one of them. Nor, I want to stress, is she a panacea for our nation’s many, many ills. What we probably need is a fused-gem of Obama, Clinton, and Sanders, but we have neither the time to wait nor an opposition to be ignored while such a politician manifests (if they ever do).

No, Hillary Clinton may not be the candidate we really need. But the left is dealing with a crisis of leadership. Bill Clinton didn’t inspire the young liberals of the ’90s into politics the way that Ronald Reagan did with young conservatives in the ’80s. Shows like The West Wing didn’t have the same effect on potential politicians that ER did on potential doctors. Many liberal policy wonks haven’t gone into government, but have joined new media.

So when we look around and Hillary Clinton is the only politician with the tenacity, the endurance, and the glad-handing, wheeling-and-dealing ability to be left standing, willing (and eager) to defend us against the forces of Orange Darkness™, and all we can muster is a Michael Bluth-esque, “Her?” I think maybe America is getting what it deserves.

I only hope that, come Election Day, not that Clinton proves herself worthy of us, but that we the voters prove ourselves worthy of her.