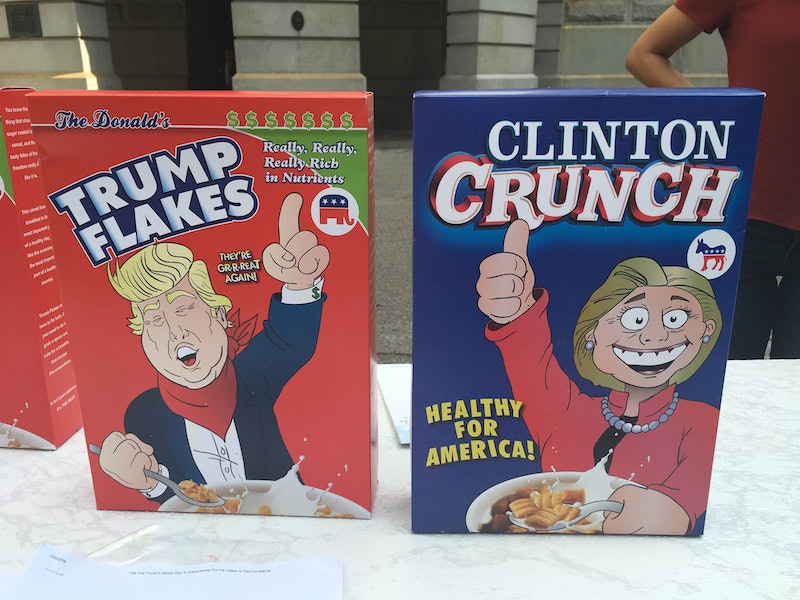 There's no need to order more buttons or baseball caps to commemorate the 2016 election: There's a new collector's item on the market that will certainly trump any other campaign memorabilia. At Philadelphia's City Hall during the Democratic National Convention, Bustle spotted the newest campaign collector's items: Trump Flakes and Clinton Crunch. Yup, that's right: cereal. Sure, everybody already has a pin and a T-shirt to show support for their candidate of choice, but cereal? Now that's a unique way to remember an election. They're also super-exclusive: Only 500 boxes each of Trump Flakes and Clinton Crunch exist.

Even though Trump Flakes and Clinton Crunch are sold as election memorabilia, the political cereals' creator, Darrin Maconi, tells Bustle: "This is a light play on politics. It's not supposed to hurt or condemn anybody. It's supposed to be funny for both."

Yes, the cereal is bipartisan. In fact, instead of giving proceeds to a political campaign, 100 percent of the profits from Trump Flakes and Clinton Crunch go toward paying college tuition — not for 27-year-old Maconi, but for his friends and younger sister. College: That's something both parties can get behind, right?

According to Maconi, "No one's had a bad reaction to [Trump Flakes and Clinton Crunch]."

Maconi said the idea came to him and his friends — which include Amanda Figueroa, 20 (above), who is a student at Rutgers University — when they were trying to figure out how to raise money to pay for college tuition.

Maconi completed a cereal design project in high school, so he had some experience. Today, he's a financial planner.

Each box of cereal is decorated with a cartoon of the candidate on the front and an activity on the back. Trump Flakes claim to be "Really, Really, Really Rich in Nutrients," and on the back of the box is a word search which includes some of The Donald's favorite phrases, including, "loser," "wall," and "Mexico."

On the other hand, Clinton Crunch claims to be "Healthy For America," and there's a board game following Clinton's path to the White House on the back called "It's Hillary's Time!"

Trump Flakes and Clinton Crunch are not cheap — an individual box costs 40 dollars, or two boxes can be purchased for 60. However, Marconi promises that, "You'll be glad you had it in November years to come. It's better than a hat or a pin... You had to be here to get one of these!"

Last week, Maconi sold the cereal at the Republican National Convention, and he says that it's selling equally as well at the DNC this week in Philadelphia. However, Maconi's still hoping for recognition from the candidates. He told Bustle, "I'm waiting for Trump and Hillary to both come here and sign a box each for me."

Autographed Trump Flakes or Clinton Crunch. Now that would be some great campaign memorabilia.