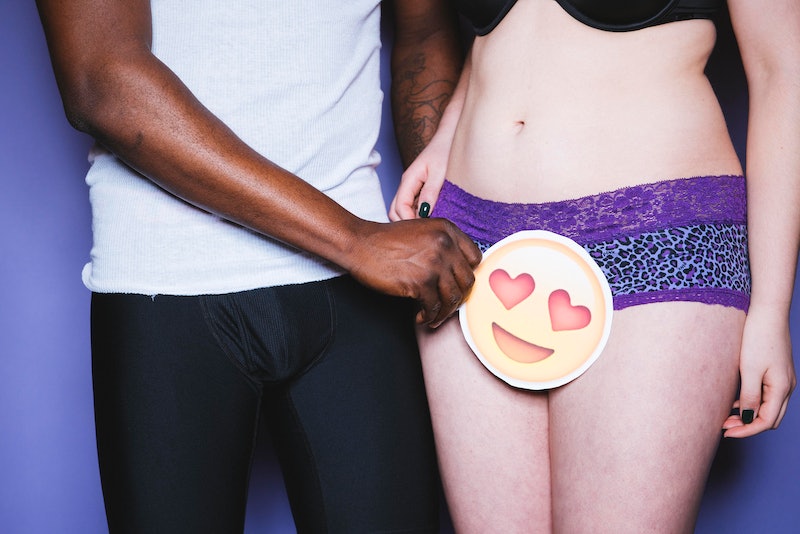 July 31 is National Orgasm Day, the national holiday you didn't know you needed. And to celebrate, Match gathered some of their most important orgasm statistics from their Singles in America surveys. Because, let's face it — even there there's much more to sex than climaxing, many of us are orgasm-obsessed. Our culture is all about if we're having one, how long it's taking, and how we're getting there. And in the quest to have an orgasm, we'll have moments of success and failure, but we're so obsessed with it that sometimes people unfortunately fake it. That's not just for women either, according to Match, 37 percent of men have faked it as well.

But "faking it" is definitely more of a female thing, and that's an issue. "The point of two people having sex together is so they can be close, feel intimate, and enjoy sexual pleasure together," relationship therapist Aimee Hartstein, LCSW tells Bustle. "Many women assume that it’s 'too much trouble' to explain to her partner what she needs [them] to do to give her an orgasm. She may worry that it will take too long." And that's so frustrating — you should always be able to be open about what you need to orgasm. The orgasms are out there — and these Singles in America statistics prove it.

So who's having the most orgasms out there? A lot of it can seem like it's down to luck, or maybe skill, but according to the surveys, there are some other factors at play when it comes to orgasm frequency. Everything from your hair color to political leanings might reveal how likely (and how often) you reach the big O.

Here are the singles who are getting off 90 to 100 percent of the time, because redheads do have more fun:

If you're ginger then it looks like your sex life is probably pretty banging, because 41 percent of red-haired singles reach orgasm almost every time.

And one-third of blonde women managed to reach orgasm nearly every time. Which means they don't have the most fun, but they do have more than us dark-haired ladies. Sorry, my fellow brunettes — we have other skills, I promise.

When it comes to professions who have the most orgasms, techies are in luck — 64 percent of singles who work in computer and electronics fields almost always have an orgasm. Silicon Valley must be a sexy place to be.

The heat, the bikinis, the beach — it's almost unsurprising that folks in Miami are having amazing sex. Sixty percent of Miami Dwellers reported orgasms almost every time. The fact that I spent my entire time there on holiday sunburnt and/or eating must be an anomaly.

5. Emojis Are Your Friend

Finally, people who love and understand emojis as much as I do! Over 60 percent of people who regularly use the kiss and lips emojis with their partner have orgasms nearly every time they have sex. Emojis are powerful, people. I've been saying it for years.

Apparently, they're conservative everywhere but the bedroom. Fifty-three percent of Republicans are reaching the big O between 90 and 100 percent of the time, while only 40 percent of Democrats can boast the same.

Over half of Android users — 55 percent — are having an orgasm every time, or pretty damn close. It probably has to do with that cool swiping thing they can do. Finger dexterity is key.

More like this
Are Gemini & Scorpio Compatible In A Relationship?
By Kristine Fellizar
Help! My Partner Only Wants Sex Late At Night & Won’t Compromise
By Sophia Benoit
15 Flirty "Thinking Of You" Texts That’ll Make Your Crush’s Day
By Lexi Inks
The “Rules For Dating” TikTok Trend, Explained
By Lexi Inks
Get Even More From Bustle — Sign Up For The Newsletter