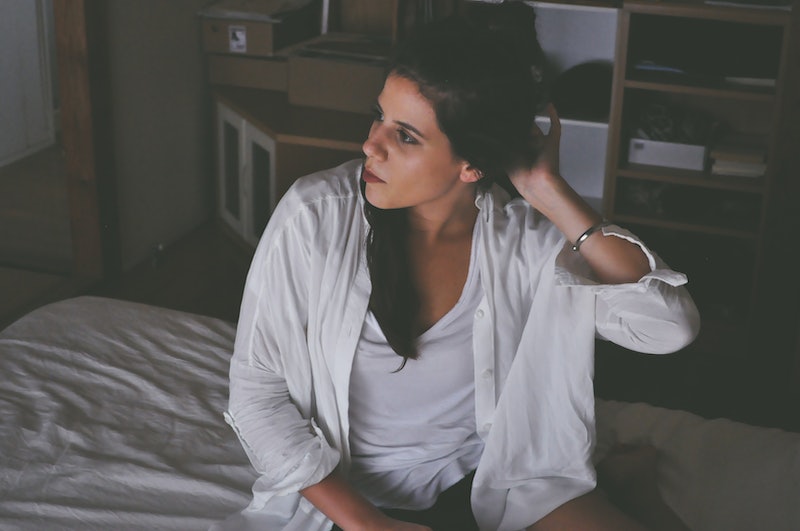 A lot of us get anxious on a fairly regular basis — life is stressful. But there's a difference between regular feelings of anxiety and clinical anxiety, which is why knowing the signs of an actual anxiety disorder can be extremely important. It can be the difference between living each day feeling miserable and getting the help you need to feel like yourself again.

According to the Anxiety and Depression Association of America, anxiety disorders are the most common mental illness in America, affecting 40 million adults, or 18 percent of the population. Not only that, even though anxiety disorders are highly treatable, only about one third of people affected are receiving treatment. That means about 67 percent of people with anxiety are not getting the help they need, and therefor are not living their best quality of life.

It's a pretty sobering statistic. However, there is some good news: there are absolutely signs to watch out for that can help you figure out if you or someone you love is suffering from an anxiety disorder. It just comes down to being aware of what to look for.

If you've been feeling increasingly anxious in your daily life, here are nine potential indicators that you very well may have a diagnosable anxiety disorder.

1. You Worry... About Everything

A compilation piece for Health.com noted that excessive worrying — about the biggest and smallest aspects of your day — can be a major sign of an anxiety disorder. In the same piece, psychiatrist Sally Winston, co-director of the Anxiety and Stress Disorder Institute of Maryland, said, "The distinction between an anxiety disorder and just having normal anxiety is whether your emotions are causing a lot of suffering and dysfunction."

2. You Have Irrational Fears

Winston also sited irrational fears as a major symptom. "A person who's afraid of snakes can go for years without having a problem," Winston said. "But then suddenly their kid wants to go camping, and they realize they need treatment."

According to psychologist Barbara Markway in a piece for Psychology Today, anxiety can also manifest itself in the form of social anxiety. If the notion of talking on the phone, being introduced to others, or even doing things like going to the doctors fills you with dread and stress, it could be a big red flag.

4. You Avoid Things Other People Seem Fine With

Markway also noted that actively avoiding situations because the idea of them makes you anxious is another potential symptom. Do you often find convenient excuses to decline invitations when you don't actually have anything else to be doing? If so, it could be more than just introversion.

5. You Weigh Every Potential Negative Outcome

According to the Mayo Clinic, a common symptom of the disorder is mentally weighing every single option in front of you and trying to vet for every negative outcome. If you do this, and also exhibit a number of the other symptoms on this list, it could very well be because you suffer from anxiety.

Do you have a lot of trouble making decisions — perhaps more than the people around you? Does it not matter if the decision is relatively big or small (AKA, "Should I buy a house?" or "Should I see the 5 p.m. or 6 p.m. movie?"). If so, the Mayo Clinic says anxiety could also be to blame.

The Anxiety and Depression Association of America list restlessness, as well as trouble sleeping, as one of their top symptoms. If you've always been someone who can't sit still and who constantly complains of having trouble getting to sleep, there could be more to the story.

According to the National Institute of Health, having trouble concentrating, as well as feeling like your mind goes blank, is another indication of an anxiety disorder. But remember — we all space out from time to time and sometimes lose our trains of thought. It's when it happens regularly, and in addition to other symptoms, that it could be an issue.

9. You Worry About Worrying

And finally, according to the Mayo Clinic, if you have an anxiety disorder you very well might worry about all your worrying. If you constantly are afraid you worry too much, or have anxiety over what all this worrying might be doing to your longterm health, this in and of itself could be a sign of a problem.

Undiagnosed anxiety can wreak havoc on our lives, which is why it's so important to be tuned into potential symptoms. And if you're worried you may be suffering from an anxiety disorder, but aren't sure what to do next, there are definitely resources for you out there. Go to NAMI.org or MentalHealthAmerica.net to locate mental health professional in your area.