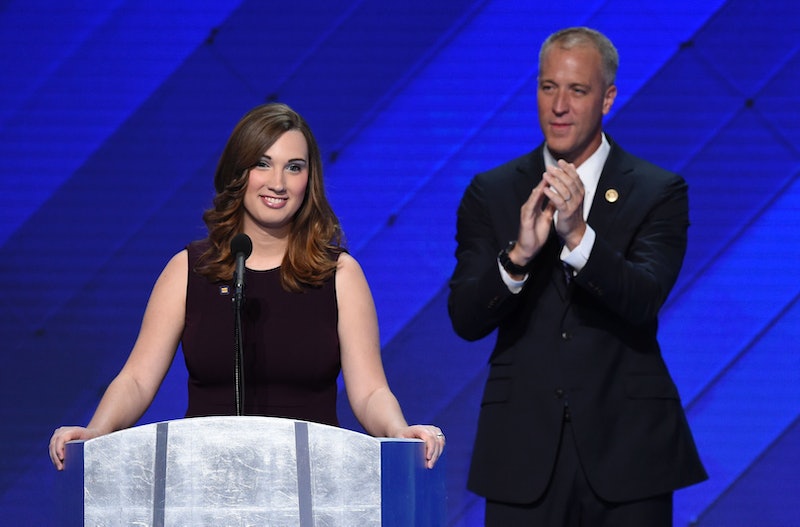 On the final night of the Democratic National Convention, before Hillary Clinton gave her speech about becoming the first ever woman to be nominated for president by a major party, there was another woman onstage who made history as well. Sarah McBride, the first transgender person to address a national convention, gave a moving speech about coming out as trans, about her husband and his untimely passing, and about how she believes Clinton will be the only president to move America forward.

Walking out to a rousing bout of applause, McBride was introduced by Rep. Sean Patrick Maloney, the first openly gay Congressman from New York. She is the national press secretary for the Human Rights Campaign, and she told Katie Couric the day before her speech, “I want to make sure that people understand that behind this national conversation around transgender rights there are real people. Who hurt when they’re mocked, who hurt when they’re discriminated against and who just want to be treated with dignity and respect.”

McBride spoke about her husband, Andy, who died of cancer just days after they were married. She wrote an essay about losing him for Huffington Post in 2015, and she spoke of him again Thursday and how he taught her that "every day matters when it comes to building a world where every person can live their life to the fullest."

Read what all McBride had to say at the DNC below.

Four years ago, I came out as transgender while serving as student body president in college. At the time, I was scared. I worried that my dreams and my identity were mutually exclusive. Since then, though, I’ve seen that change is possible.

I witnessed history while interning in the White House and helping my home state of Delaware pass protections for transgender people. Today I see this change in the work at the LGBT caucus and in my own job at the Human Rights Campaign, but despite our progress, so much work remains. Will we be a nation where there's only one way to love, one way to look, one way to live? Or, will we be a nation where everyone has the freedom to live openly and equally; a nation that's Stronger Together? That's the question in this election.

For me, this struggle for equality became all the more urgent when I learned that my future husband, Andrew, was battling cancer. I met Andy, who was a transgender man, fighting for equality and we fell in love. And even in the face of his terminal illness — this 28 year-old — he never wavered in his commitment to our cause and his belief that this country can change. We married in 2014, and just four days after our wedding, he passed away.

Knowing Andy left me profoundly changed. More than anything, his passing taught me that every day matters when it comes to building a world where every person can live their life to the fullest.

Hillary Clinton understands the urgency of our fight. She will work with us to pass the Equality Act, to combat violence against transgender women of color, and to end the HIV and AIDS epidemic once and for all.

Today in America, LGBTQ people are targeted by hate that lives in both laws and hearts. Many still struggle just to get by. But I believe tomorrow can be different. Tomorrow, we can be respected and protected — especially if Hillary Clinton is our president. And that's why I'm proud to say that I'm with her.