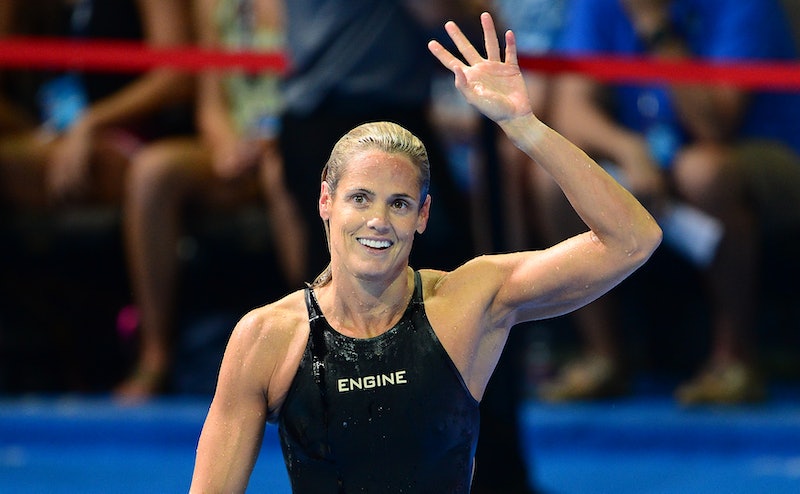 If you were to put together a list of the most jaw-dropping female athletes to ever walk the face of the earth, swimmer Dara Torres would be somewhere at the top. Dubbed the fastest swimmer in American history, she's got 12 Olympic medals under her belt, four of them gold, and she was the first swimmer to represent the U.S. in five different Olympic games. Over the course of her highly successful career, Torres has broken three different world records (her first at the tender age of 14!), and has retired — and then come back — three times. To say she's an inspiration would be the understatement of the century.

Torres is the kind of woman who has redefined what it means to be a female athlete. She shocked the world when she came out of retirement one last time for the 2008 Olympics in Beijing at 41 years old, especially considering the fact that her first Olympic games were in 1984. Despite her age and the comments surrounding it, she slayed, taking home three silver medals from China.

As exciting as her career has been, though, we can't help but wonder what Dana Torres is up to now. Is she still swimming? Is she going to coach? What's the deal? Bustle reached out to Torres' rep for comment and didn't hear back, but luckily, some of what she's been up to lately isn't exactly a secret.

This might be slightly disappointing, but a big thing you should know about Dara Torres is that she's not going to come out retirement and compete in any swimming events anymore. In a video on the Oprah Winfrey Network, Torres says flat-out that her 49-year-old body can't handle all that competition anymore. If she could do just one race and call it a day, she might, but the games require a few separate rounds, which can put immense pressure on a body that's been around for half a century.

However, she fooled the whole world into thinking that her fourth comeback was just around the corner. In 2015, in perhaps the best April Fool's prank in the history of pranks, Torres tweeted that she was jumping back into the pool to train for the 2016 Rio Olympics.

Two hours later, she tweeted a similar message once again, making us think it was actually happening.

Everyone freaked out, to say the least. She's since been very clear that it was a joke, and that she has no intention of competing in the Olympics again. Looking back on it now, it's actually a pretty hilarious stunt.

She still has plenty to offer the swimming world, though. Torres is currently the captain of Team Kellogg's, an initiative by Kellogg's that brings together some of the most amazing American athletes in order to inspire and encourage both aspiring athletes and everyday folk alike. Through social media platforms and Kellogg's sponsored events, Torres is a positive reinforcement to the Olympians who are getting ready for Rio. She's been using the hashtag #GetsMeStarted on her Facebook and Twitter to "share some veteran wisdom," as she puts it.

In a recent interview with Cheat Sheet, she talks about how rewarding it is to go from competitor to Team Kellogg's mentor, saying, "These athletes seem a little bit more mature than I was at 17 years old... But if anything, hopefully, my one big piece of advice is: You’ve done all the work up to this point, just enjoy it. Go out there and have fun."

Athletes aren't the only ones she's inspiring, though. Since her retirement from competitive swimming, Torres has written and published two books that have been a huge hit around the world. Age is Just a Number: Achieve Your Dreams at Any Stage in Your Life was published in 2009 and it was named one of the top 25 best-selling business books. One year later, she released Gold Medal Fitness: A Revolutionary 5-Week Program , which became a New York Times bestseller.

In 2010, Torres showed her support for women's health by participating in the Red Dress Collection Fashion Show, which was put on by the Heart Truth, a national awareness campaign focused on the number one killer of women — heart disease. She strutted the runway in a stunning red dress by Rachel Roy, and surprised everyone by taking off her heels and coming down the catwalk barefoot. Badass.

Today, Torres continues to show her dedication to charity work by being a celebrity swimmer for Swim Across America, a nonprofit organization that hosts benefit swims in order to raise money for cancer research and education. She's been swimming for their events for many years.

You can also see Torres on TV's first all-female sports talk show on CBS Sports Network called We Need To Talk. She teams up with other incredible athletes and seasoned commentators, such as WNBA legend Lisa Leslie and reporter Allie LaForce. The show airs every Tuesday at 8 p.m.

In addition to all that, Torres is also a proud mother of 10-year-old Tessa Grace. A few weeks ago, she brought Tessa, who is a young swimmer herself, to the Olympic swimming trials to witness Michael Phelps and Ryan Lochte qualify for Rio. But when Tessa is at swim practice, Torres says she takes off and grabs dinner rather than sticking around.

"It keeps me from getting too involved or looking at coach and thinking, 'Wait a minute ...' I think it's important to let the kids enjoy their time and let the coaches coach," she told TODAY Parents. She also wants to make sure her daughter is doing what she loves, so she gives her the opportunity to try out other sports, like gymnastics, so she can decide on what she likes best. All we have to do now is wait patiently to see what kind of world records Tessa is going to break when her time comes.