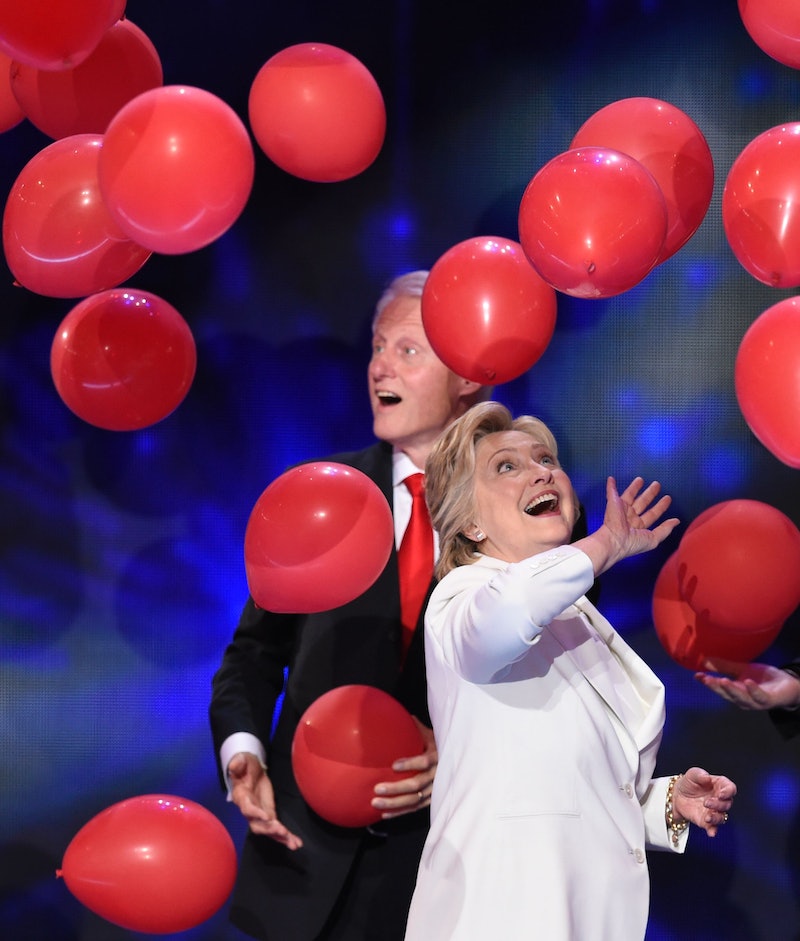 On Thursday evening, Hillary Clinton gave the speech she's been waiting for more than a decade to give: A grave promise to take care of America when she becomes president, along with a clear outline of her policies and a full-throated takedown of Donald Trump. Oh, and then Hillary and Bill Clinton, plus Tim Kaine's family, drowned in balloons. At least according to Marco Rubio, who tweeted snidely: "Hillary and Kaine may have to be rescued from that stage they are about to drown in balloons."

Rubio's tweet lacked punctuation and class, but what's new? A female presidential nominee; that's what's new. Clinton embraced her role as the first-ever woman to be nominated by a major party in her speech, eliciting cheers and tears from her audience. And then, the balloons. All this talk about having to "humanize" Hillary Clinton (who is clearly human enough, thank you very much!), and all you needed to do to make the former (and potentially future) First Family the most endearing family imaginable was throw balloons at them. Oh, and Tim Kaine and wife Anne Holton joined in the balloon fun, too.

Seriously. Look at these fully-grown adults kicking and clawing at these balloons like your cat when it sees Christmas tinsel.

And, finally, Clinton took some time out from the rampant balloon play to tweet.

More like this
These 25 Female Governor Candidates Won Primaries & Could Make History
By Tess Garcia
Why TikTok Is Flooded With Controversial Videos About "Pick Me Girls"
By Courtney Young
This TikTok Song About An Unrequited Romance Has FYPs In Shambles
By Emma Carey
On TikTok, "Cbat" Has Been Named The Worst Sex Song Ever
By Lexi Inks
Get Even More From Bustle — Sign Up For The Newsletter