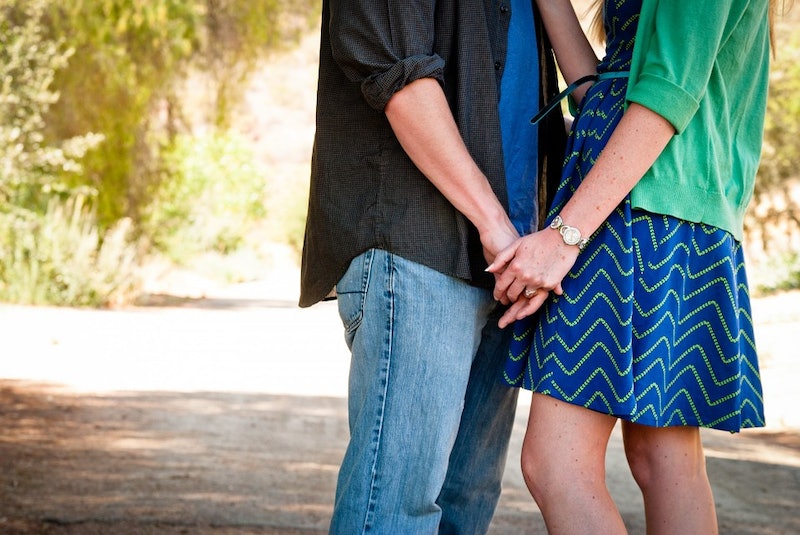 I’m someone who tends to overanalyze, so when I’m in relationships it’s really hard for me to let go of certain things sometimes. It’s also hard for me to drop some of the relationship habits I’ve established over time. By considering things happy couples let go of, I’ve realized there are many ways of thinking and acting that I’ve been prone to for ages that might, in actuality, be hurting my love life. It’s possible you and your SO, too, might be prone to hanging on to some of the things we’ll discuss below. It is interesting to consider how the world’s generally happy couples act in order to understand the right ways of being in a relationship. Thinking about these things (and then making changes, if we deem them necessary) can allow all of us to have the happiest and healthiest relationship possible.

In relationships, it might feel inevitable that we’ll be hooked on certain ways of thinking and acting with our significant other. What we might not realize is that those ways of thinking and acting could be playing against our relationship in a negative way. For instance, an abundance of jealous habits could be slowly tearing the relationship apart. Similarly, letting the little things annoy us in a big way can also be eating away at our relationships. Happy couples — as we’ll discuss in this article — are pros at letting go of certain things in order to have the best relationship. If you’re interested in learning their habits, read on. Here are 10 things happy couples let go of.

Whenever people refer to games (in a relationship sense) as childish, I’m usually the first one to agree. Happy couples agree too — games are not a tactic worth clinging to when you’ve found the right partner. According to DoctorOz.com, avoiding games is how a happy couple sets a foundation for honesty and straightforwardness in their relationship. Avoiding games from the onset also helps increase the likeliness that it will grow in a healthy manner, the outlet added. So, playing hard to get, for example... happy couples would say forget about it.

2. The Little Annoying Things Their SO Does

How easy it is to let those small annoying things our partner does get to us? Like, when he or she eats really loudly, or leaves the cabinet door open every time. According to Reader’s Digest, happy couples are those who let these things slide without getting overly worked up. Instead of getting completely irritated, happy couples accept the things they cannot change about their partner, and resist the urge to complain about them.

Happy couples will work a balancing act between letting go of jealousy and respectfully compromising with each other, according to April Masini, a New York-based relationship and etiquette expert. I spoke to Masini via email to get her relationship advice, and she says of jealousy, "It’s very hard to let go, but if you process the reasons that you are letting go and understand your part in the issue that you are trying to let go of, it will be much easier to move on from what you were stuck with before."

Masini said people will often agree to let go of jealousy, when really they're just stockpiling it (which might lead to a burst of anger down the road). Rather, happy couples will process the jealous and reach a middle ground with each other in order to move on effectively.

4. An Expectation That Their SO Can Read Their Mind

If you’ve been together a long time, you might assume that your partner knows you well enough to be able to read your mind. So, when you’re angry, you might think he or she knows precisely why. This isn’t always the case, though. In fact, happy couples are those that let go of this perception, and instead are able to talk to each other candidly about what they’re thinking instead of waiting for their partner to figure it out. According to VIBE, the best relationships are those where partners are able to explain their needs and issues clearly to each other (while doing so in a calm way).

5. Concern Over Who Does More

Similarly to how it might be very simple to let a partner’s small habits bug us, it can also be very simple for us to get worked up about how little things — like who’s done more chores that week, for example. Women’s Health spoke to Kelley Kitley, L.C.S.W and founder of Serendipitous Psychotherapy, who said happy couples avoid worrying about the small stuff like this, and rather are the kind to work as a team. “They have a common goal and understanding of working together to live their best lives possible,” Kitley told the outlet.

6. Any Tendency To Yell

Happy couples are also known to let go of that tendency to yell — even if they’re incredibly angry. According to Huffington Post, people in a happy relationship don’t mind if they’re the one who has the last word in a fight, and are the kind to resolve the fight without needing to yell. Instead, they are known to calmly communicate their differences.

7. A “My Way Or The Highway” Mentality

On that argument note, happy couples are known to dismiss that “my way or the highway”-type mentality, and are instead willing to compromise. According to Oprah.com, happy couples will make it a point to see their partner’s side of the argument and try to put themselves in their shoes.

Masini tells me that sometimes couples can be really successful, too, if one has the "my way or the highway" mindset, while the other is more of a "go with the flow" type. If that's the match, it can work out beautifully, Masini says. "But more often, there is something towards the middle that requires letting go, compromising and remembering the big picture — where you don’t want to make a mountain out of every molehill that comes along," Masini adds.

According to Women’s Health, happy couples don’t cling to secrecy in their relationship, and rather let go of privacy and are open with one another. The outlet spoke to Shawnda Patterson, relationship coach and author of The Dating Game who said happy couples tend to be very transparent with each other. “And unless your mate has given you a valid reason to doubt their loyalty, trust that there are no secrets between you,” Patterson told Women’s Health. “True intimacy has no secrets.”

9. An Inclination To Neglect A Major Relationship Issue

Avoid the big problem and it will disappear? Not so much, unfortunately. Those in happy relationships neglect any feeling that they should avoid a major relationship problem (e.g., overall lack of trust), and instead will take time to address it and fully talk it through, according to Psych Central.

10. The Need To Spend Every Moment Together

If you haven’t heard this notion before — listen here: It’s actually vital for a happy and healthy relationship to spend time on your own sometimes, too. Happy couples know this to be true. According to Reader’s Digest, happy relationships are those where the partners let go of the need to spend every moment together, and are OK doing things on their own, too. The outlet said some “me” time allows partners to grow as individuals.

More like this
The Differences Between Polyamory & Open Relationships
By Lexi Inks
The 19 Best Tweets & Memes About Bisexual Awareness Week
By Lexi Inks
30 Clever Ways To Slide Into Your Crush's DMs
By Griffin Wynne, Carolyn Steber and Lexi Inks
Breeding Kinks Have Been On The Rise Since Roe V. Wade Got Overturned
By Lexi Inks
Get Even More From Bustle — Sign Up For The Newsletter