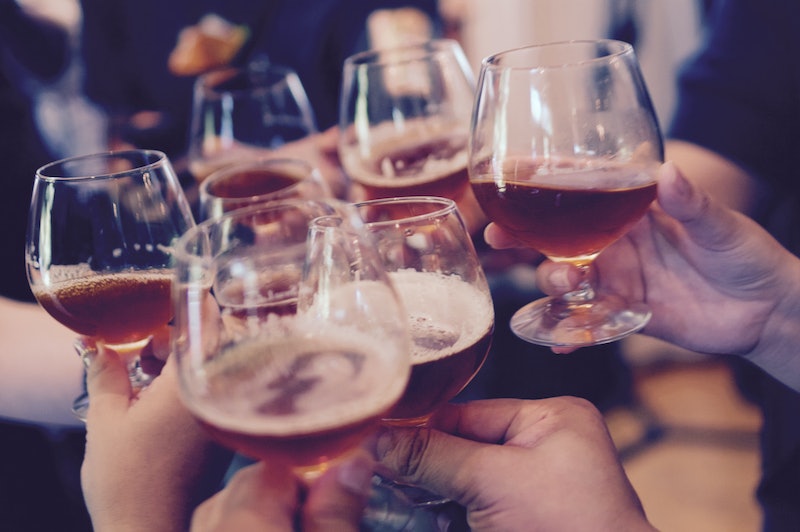 Beer is sort of an acquired taste, and the memories you have of your first sips may not be pleasant ones. Whether you do or don't like beer to this day, it may actually be quite simple to make beer taste better — you just need to drink it to some music. Research conducted by a team from Belgium, the U.K., and the Netherlands, and published in Frontiers in Psychology suggests that beer drinking can (and should?) be a multi-sensory experience.

The study also showed that viewing a beer's label had complicated (possibly negative) effects on the drinking experience. Drinkers who were not shown the label perceived the porter as stronger, and one visual element of this particular label may have been off-putting. So whether or not viewing a drink's label (without music) improves the experience is a function of the drinker's preferences and the characteristics of the label. So, uh, maybe don't sit quietly at home staring at your bottle of beer, I guess?

To be fair, this study was undertaken in conjunction with the Brussels Beer Project, a crowdfunded brewery (hardly a neutral spectator). But it's not the first time that a study has shown a connection between drinking experiences and music. Research also shows that loud music can cause people to drink more faster (as you might have learned the hard way yourself, ouch).

In the future, I'd like to see a study that compares the reported experiences of drinking the same beer to different music. It would be really interesting if certain music worked better to enhance a beer than other music. Perhaps the right music can make a drinking experience sort of like having synesthesia, the condition when people have one of their senses triggered by another (like hearing a color). If different musics work the same for enhancing the taste of a single beer, that might show that it's just music in general that improves drinking, not the "right" song.

In any case, best to have your guard up, lest bars begin to try to offer special evidence-based beer and music pairing nights in an attempt to get you drunk and take your money!

More like this
This Psychological Effect Might Be Keeping You From Hitting Your Goals
By Lexi Inks
How Ghosts Inspired Kesha’s New Music
By Jake Viswanath
Stormzy Made A Passionate Speech About The Importance Of Diversity
By El Hunt
The 5 Best SLS-Free Toothpastes, According To Dentists
By Amy Biggart and Danielle Calma
Get Even More From Bustle — Sign Up For The Newsletter