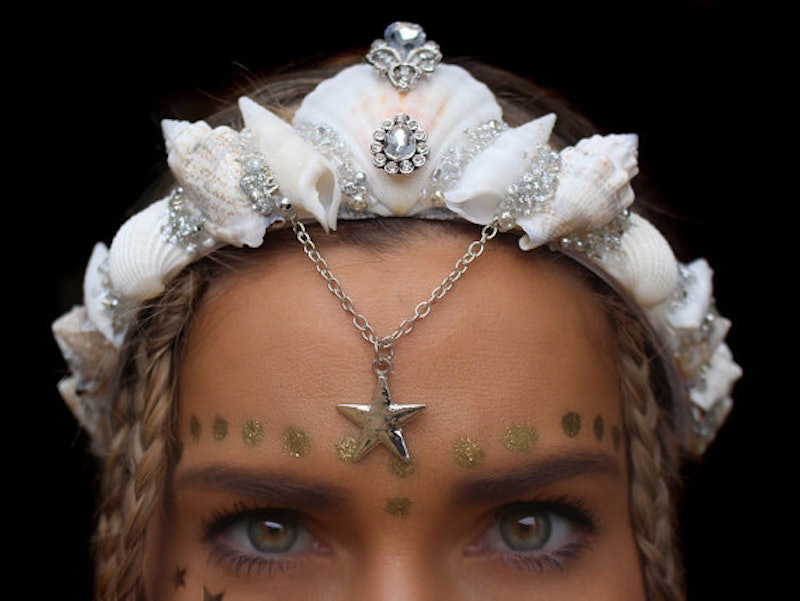 If you've been rocking flower crowns every summer since high school, chances are you might be bored of the style statement. But this season, you're in luck: Mermaid crown hair accessories are in style, and they're sure to fulfill every whimsical fantasy you've ever had. Put down the daisies and marigolds, pick up the glue gun, and find those shells you collected in Florida last year. They now have a new purpose other than decorating your bathroom sink.

According to Popsugar, the trend started with Chelsea Shiels of Melbourne, Australia, who owns an Etsy shop called Chelsea's Flowercrowns that's filled with these Ariel-approved tiaras. Her creations are anything but basic, though. Popsugar reported that "in addition to shells, she utilizes crystals, beads, and chains to make one-of-a-kind, show-stopping hair accessories."

"Show-stopping" is probably the best word for it. These headpieces aren't for the faint of heart. The options are more for the fashionistas who enjoy making a statement and attracting some can't-help-but-look-twice side eyes. The crowns are elaborate and out to make a splash (pun intended) with Poseidon-like details. The shells are big and create regal crowns, and they're offset with intricate sweeps of chains and dangling jewels, making the wearer look like a siren catching some rays on a rock.

While this might seem hard to incorporate into a normal, everyday wardrobe, Shiels styles the pieces on Instagram to give us an idea of how to wear them at home. As I predicted before, these babies are not for the timid.

Mashable reported, "The mermaid crowns are certainly elaborate and elegant enough to stand on their own, but Chelsea's Instagram proves that they are even better when complemented with neon hair, sparkly eyebrows, glitter makeup, lavish nose rings, and psychedelic sunglasses." It's all about jumping into the bold aesthetic, and owning it. Why pair a shell crown with a cardigan, when you can get weird with glitter brows?

What's even better is that Shiels is eco-friendly with her designs — she doesn't merely walk down to the beach with a big bucket and pick up her shells. In an Instagram post, she explained to her fans, "I only buy from suppliers that only collect shells from over flowing beaches around the world. My main supplier donates 30 percent of proceeds back into a variety of charities... mainly to help preserve the Great Barrier Reef! I love the ocean and I assure you I have great suppliers and pay lots of money for my shells for this reason! I do not support anyone stealing from our beaches to make a profit." An artist who sticks to her ethics and encourages others to do the same is one worthy of support, IMO.

While Shiels is busy taking over the fashion world with her mystical creations, she's not the only Etsy vendor who knows how to bring out our inner sea goddesses. Check out some other options below.

This option has a more "old school siren" feel to it, forgoing any chain or beading extras and focusing only on the shell design.

This tiara skips the shells entirely, but focuses on quartz crystals instead.

Here's a tiara for the person who wants to try this trend on for size, but doesn't necessarily want to put on a massive crown as their first try. While this is still a show-stopper, it's a little more subdued.

Say hello to the Lisa Frank version of the mermaid trend — it's full of razzle dazzle and rainbow hues.

And for those who aren't ready to have King Poseidon prongs sticking out from their headbands, a simple beaded one might do the trick.

Summer isn't entirely over yet, so get out there and try this trend out if it's caught your interest! What better way to close the season than by channeling your favorite mermaid?

More like this
How To Style Your Hair For A Festival, According To Maya Jama’s Hairstylist
By Tomi Otekunrin
Why “Patch Snatch” Ponytails Are Everywhere Right Now
By Tomi Otekunrin
How To Protect Your Scalp From The Sun, According To Derms
By Paris Giles
Olaplex's New Shampoo Is Here To Save Your Dull Summer Strands
By Audrey Noble
Get Even More From Bustle — Sign Up For The Newsletter