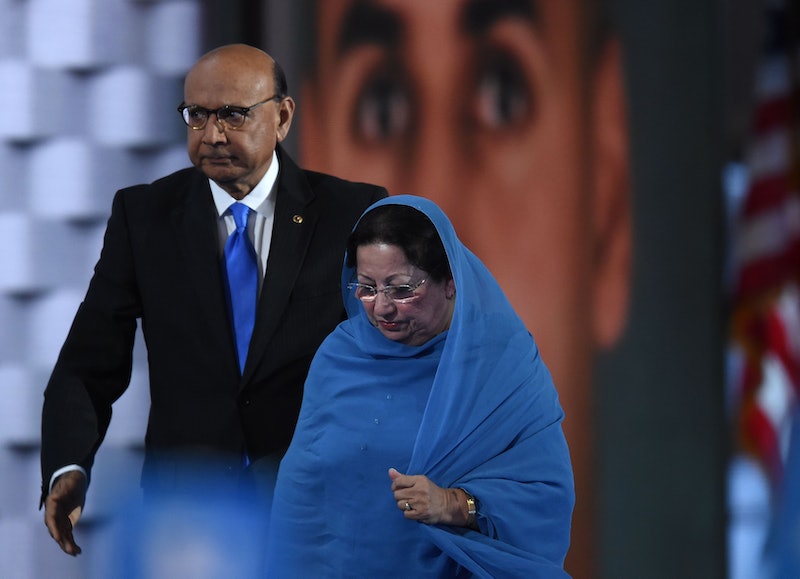 Khizr Khan, the father of a U.S. soldier who died in combat and a surprise hit speaker at the Democratic National Convention, fired back at Donald Trump on Sunday after the Republican presidential nominee criticized Khan's wife for her performance at the convention. Trump attempted to discredit the unexpectedly popular speaker by pointing out this Khan's wife, Ghazala, did not address the convention, but ended up catching criticism from Khan himself. Khizr Khan told The Washington Post that Trump's comments were "typical of a person without a soul," a remark that has ignited campaign coverage within just a few hours of publication.

The unlikely confrontation between Khan, a lawyer with an advanced degree from Harvard, and Trump began on the DNC stage Thursday night. In his speech, Khan pointed to Trump's apparent ignorance of the gravity of his proposed ban on Muslim immigration, which would have kept Khan's son, late Army captain Humayun Khan, from entering the country when the family emigrated to the United States in 1980.

"Have you ever been to Arlington Cemetery?" Khan asked Trump from the stage in Philadelphia. "Go look at the graves of the brave patriots who died defending America — you will see all faiths, genders, and ethnicities. You have sacrificed nothing and no one." Khan continued with another challenge, questioning Trump's familiarity with the U.S.'s founding documents (which was already disproved earlier this month). "Let me ask you, have you even read the United States Constitution? I will gladly lend you my copy. In this document, look for the words, look for the words, liberty and equal protection (under) law."

Trump's response to the call out was predictably Trump-ish. An initial comment in a pre-taped segment for ABC's This Week was leaked before its Sunday air date — the clip showed Trump's judgement of Ghazala Khan's presence on stage. "His wife, if you look at his wife, she was standing there. She had nothing to say. She probably, maybe she wasn't allowed to have anything to say. You tell me. But plenty of people have written that."

The campaign released a statement on Saturday, cleaning up the language from Trump's interview and spinning the coverage to address Trump's proposed Muslim ban and "Hillary Clinton's central role in destabilizing the Middle East." The statement read: "Captain Humayun Khan was a hero to our country and we should honor all who have made the ultimate sacrifice to keep our country safe. The real problem here are the radical Islamic terrorists who killed him, and the efforts of these radicals to enter our country to do us further harm."

The back and forth between Trump and Khan has resurrected the somewhat-forgotten issue on Trump's proposed ban on Muslim immigration. Fox News anchor Megyn Kelly debated the issue with former Arkansas Gov. Mike Huckabee on Friday, defending the Khan family in the latest of her own battles against Trump.

"He says he’s expanded his ban on Muslims to include Muslims from any territory that suffers terrorism. And the UAE where this little boy, at two years old, came from would be included. His parents are from Pakistan. That would be included. And so that’s the dad’s point, that his son, an American hero, would not have been here if Donald Trump had been president when they wanted to come."

The consequences of increasing debate on this contentious issue should be seen through the rest of the election cycle. One of Trump's biggest policy proposals to date is now being tested under the full scrutiny of the Republican Party nomination, and therefore, the presidency.

More like this
5 Ways To Stand In Solidarity With Women In America From The UK
By Sophie McEvoy
How To Fight For Reproductive Rights, Based On How Much Time You Have
By Courtney Young
The Families Of Grenfell Tower Are Still Waiting For Justice, Five Years On
By Bustle UK
Police Shove 'Full House' Star Jodie Sweetin At An Abortion Rights Protest
By Radhika Menon
Get Even More From Bustle — Sign Up For The Newsletter