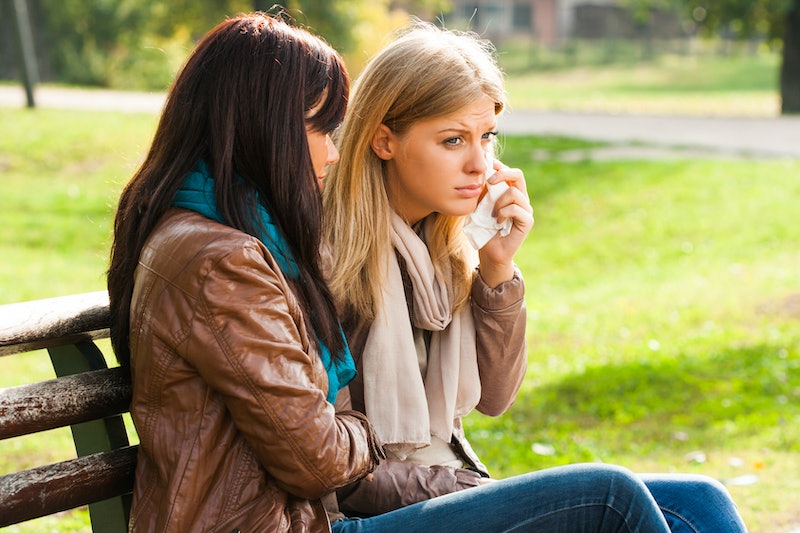 Romantic breakups are notoriously difficult, for the dumper as well as the dumpee. But ending a friendship may be just as, if not more, complicated. Maybe you two have been BFFs since preschool, or maybe you have so many mutual pals that it’s impossible not to run into each other every weekend. If your lives are so intertwined, how do you extricate yourself from a friendship that's run its course or even become destructive?

The good news is there are ways to make this potentially awkward, painful situation more manageable. You'll still feel the hurt and loss of parting ways, but, if you’re truly convinced that the friendship is dragging you down, these 8 tips will help you break it off the right way.

If you’re breaking up with a super-close friend, a text message or even an email just won’t cut it. You guys have shared lots of important experiences, and he or she deserves some face-time while you air your grievances. Plus, as psychiatrist Gail Saltz, M.D. writes on Today.com, ending things in person gives your friend a chance to say what’s on his or her mind, too.

However, if you're breaking things off with someone you don’t know that well or haven’t been friends with that long, Saltz suggests that the old “fade-out” might be sufficient. In other words, try not returning phone calls and not initiating plans to hang out and see if he or she doesn’t get the hint. Since you were never that close, no confrontation necessary.

If you’re planning to break up over the phone, make sure you do it at the right time, psychologist Irene Levine, Ph.D. writes in Best Friends Forever: Surviving a Breakup With Your Best Friend . In other words, try to avoid calling when the person is at work, spending time with family, or in another public situation where he or she might not feel comfortable talking. And no matter how you communicate your feelings, avoid starting the break-up conversation when the person is emotionally fragile, such as right after the end of a romantic relationship.

There’s a good chance your friend will be totally caught off guard by your desire to end things. In that case, communication expert Debra Fine writes at The Huffington Post, be ready to articulate the specific reasons you’re disappointed in him or her. Also come prepared to talk about what you see for the future of your friendship and whether you want to cut off all communication or just hang out less often.

According to Saltz, a fear of confrontation can keep you from communicating the real reasons you’re ending the friendship. But it isn’t fair (or particularly mature) to leave your ex-pal hanging. Close friendships in particular warrant some kind of closure, so be open to having a frank discussion about the way each of you is feeling.

One sort-of-sneaky way to avoid an official breakup is to tell your friend you want to take a hiatus from your relationship and reevaluate it at a later date. The idea, friendship coach Jan Yager tells the New York Times, is that your friend will probably start cultivating other friendships and eventually lose interest in yours. (Of course, be prepared with a plan of action should your friend try to restart the friendship at that later date.)

While it might be tempting to tell your friend how he or she totally ruined your life, making accusations isn’t the most productive way to go about a breakup. Yager suggests that you tell your friend you aren’t rejecting him or her but the way you two interact. That way the focus is on the actual relationship, and not exclusively on your friend’s flawed personality. Besides, the reality is that friendships end often, and it doesn’t always have to be somebody’s fault.

If you’re calling it quits on a relationship, there’s a good chance you’re angry about the way your friend acted. But keep in mind that your friend is a person, too. Love and sex expert Dr. Laura Berman advises people ending a romantic partnership to think about how they’d want to be treated if the situation were reversed — and the same logic applies to ending a friendship. Don’t let your frustration prevent you from showing kindness and patience. As mentioned above, avoid communicating your feelings via text or social media. Have a discussion in person or over the phone and give your friend a chance to talk about his or her experience, too.

Forgiving your friend for certain mistakes is actually important for your own emotional health, according to Loraine Smith-Hines, author of Toxic Friends: A Practical Guide to Recognizing and Dealing with an Unhealthy Friendship . It’s unrealistic to think you’ll just forget about what happened between you two, but see if you can let go of some of your anger after the breakup and stop ruminating on what went wrong. Even if you don’t explicitly tell your friend, “I forgive you,” you can still know in your mind and in your heart that you’ve moved on.

Toxic Friends: A Practical Guide to Recognizing and Dealing with an Unhealthy Friendship, $12.95, Amazon

More like this
The Top Mistakes Scorpios Make In Relationships (& How To Avoid Them)
By Nina Kahn
How To Do The Intimacy-Boosting Lotus Sex Position
By Laken Howard and Lexi Inks
What Is The Forest Personality Test? The TikTok Trend, Explained
By Georgina Lawton
Are Leo & Capricorn A Good Match?
By Kristine Fellizar
Get Even More From Bustle — Sign Up For The Newsletter