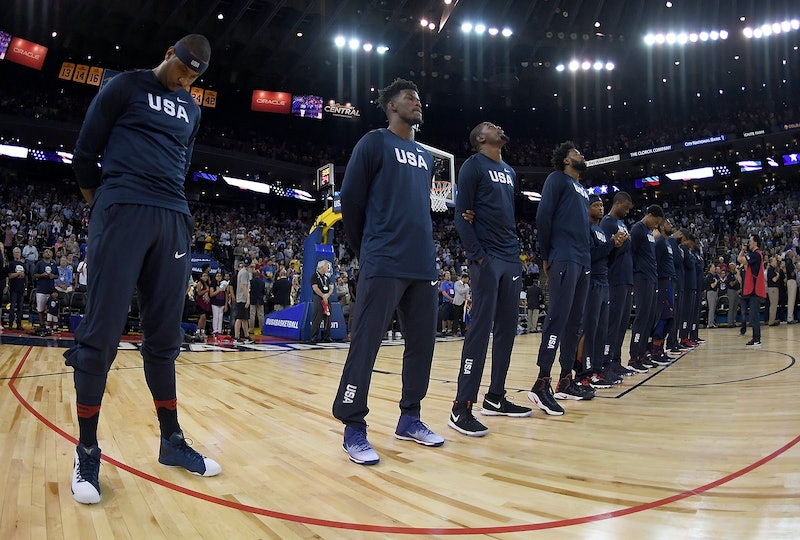 With the Olympics right around the corner, let's take a look at just who's on the USA Olympic basketball team for 2016. There are some superstars going to Rio, and they're bring a whole lot of experience to the court. Team USA's women's basketball roster is made up of 12 women have a total of 17 gold medals in between them, nine of whom are returning gold medalists from London — that's a pretty formidable line-up.

The 2016 team is led by tri-captains Sue Bird of the Seattle Storm, Tamika Catchings of the Indiana Fever, and Diana Taurasi of the Phoenix Mercury, who can each boast three gold medals to their name. Teammates Sylvia Fowles and Seimone Augustus from the Minnesota Lynx can boast two golds each. The Lynx will be making a strong showing (on and off the court), with two other gold winners, Lindsay Whalen and Maya Moore rounding out the contingent.

Tina Charles of the New York Liberty and Angel McCoughtry of the Atlanta Dream round out the returning Olympic champs on the 2016 Olympic team. The three other team members are all first-timers: Brittney Griner of the Phoenix Mercury, Elena Delle Donne from the Chicago Sky, and Breanna Stewart of the University of Connecticut.

Carol Callan, the USA Basketball Women's National Team Director and the chair of the selection committee said of the team in a press release:

We are grateful that the very best athletes in our country want to play and push each other to be better whenever our team gathers to train. This team has all of the areas necessary for success covered — talent and depth at each position, flexibility to play several positions, leadership on and off the court, international experience, demonstrated teamwork and a blend of veterans and youth.

The five-time defending Olympic gold medalists will certainly put up a good show, but can they make it six?

On the men's side, there are a ton of powerhouse players defending their third title in a row. This roster is full of first-timers: the only returning members are Carmelo Anthony of the New York Knicks and Kevin Durant, formerly of the Oklahoma City Thunder. Durant will join his soon-to-be teammates on the Golden State Warriors, Klay Thompson and Draymond Green, and former Warrior Harrison Barnes, now playing for the Dallas Mavericks. Also from the West Coast are DeAndre Jordan of the Los Angeles Clippers, while DeMarcus Cousins will be representing the Sacramento Kings. The Toronto Raptors will be sending Kyle Lowry and DeMar DeRozan. Rounding out the squad are a few Midwest-based players: Jimmy Butler of the Chicago Bulls, Paul George of the Indiana Pacers, and Kyrie Irving from the Cleveland Cavaliers.

So, that's the long and short of who is going to be representing Team USA on the basketball court at the 2016 Summer Olympics in Rio. Get ready!