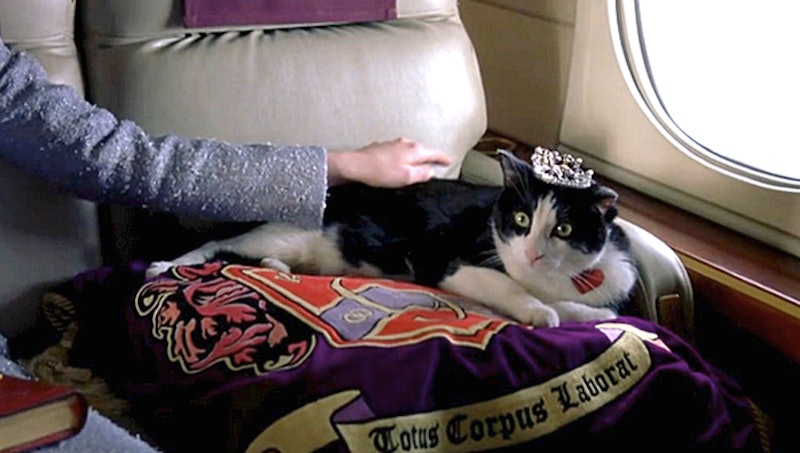 Fifteen years ago, The Princess Diaries was released in theaters and introduced moviegoers to Amelia "Mia" Mignonette Thermopolis Renaldi (Anne Hathaway), the unexpected princess of the fictional country of Genovia. And she had some royal subjects, as well: Her strict, but loving Grandmère (Julie Andrews),best friend Lilly Moscovitz (Heather Matarazzo), and top cat Fat Louie. I think it's time for us to take a moment to appreciate Fat Louie from The Princess Diaries, one of the finest felines to grace the big screen and Genovia. The black and white kitty was always cool, collected, and caring ear to all of Mia's royal dilemmas.

Fat Louie originated in the original The Princess Diaries book series by Meg Cabot, on which the movie and its 2004 sequel are based. According to Glamour, four different cats played the pudgy feline and one of them just happened to belong to Hathaway as a pet. Talk about living large. The loyal kitty stayed true to his owner throughout her tumultuous time finding out she was indeed a princess, getting a makeover, becoming popular, getting her first kiss, and then living life as a 21-year-old princess in the sequel, The Princess Diaries 2: Royal Engagement (which was written by now-TV producer royalty Shonda Rhimes).

Let's give it up for Fat Louie, one meow at a time.

1. He Loved Mia Before Her Makeover

Because he's such a good kitty. Yes, you are.

2. He Helps Mia With Her Homework

Fat Louie is not only adorable, but smart.

3. He's Definitely In Charge Of The TV Remote

Sorry, other Thermopolises. Fat Louie's got to watch his stories.

4. He Cannot Be Tamed Or Locked Up

Fat Louie will not be happy if he is and he may even use his mind to get out of it. You know, by summoning Mia. It's part of his cat powers.

In a house covered in photos of other cats. Call it his #catgoals abode.

On a comfy bedspread. Or three. The more he's got, the better he feels.

Fat Louie even has his own little crown, because of course he does. The UK has Larry the Cat, its own Chief Mouser to the Cabinet Office (Not kidding; he's real and actually a cat). So why can't Genovia and its princess have some feline royal position. It's only fair.

And on his throne. Duh. As Mia says in the movie, "He's totally adapted to being a royal. l guess he was one all along."

Mia may be the princess with a crown in The Princess Diaries, but let's face it: Fat Louie is true royalty.