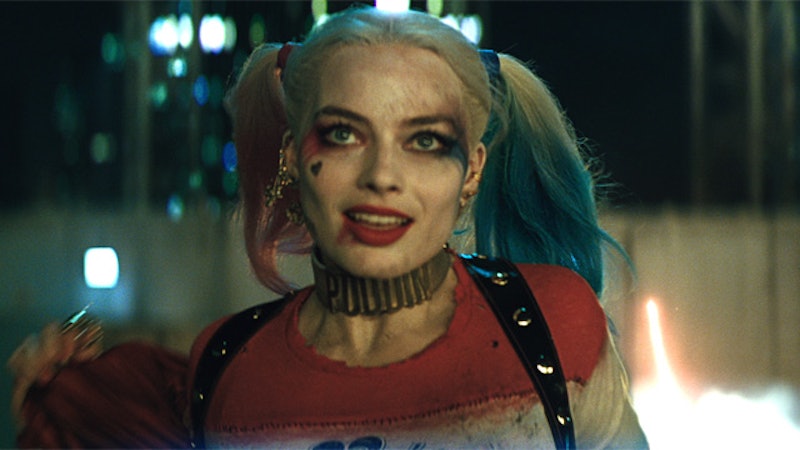 Bring up Harley Quinn to a group of comics nerds, and you're bound to get a series of impassioned responses, especially if you're talking Suicide Squad. Quinn's role in the new film gives some fand hope — here's a mainstream comics character that, due to her major leading role in the new film, could spark huge change in the tired relationship between comics and sexism. Harley dominated this year's Comic-Con, where folks of many genders cosplayed as Quinn for the fest's annual Harleypalooza. And fans everywhere are constantly bringing up some of the best Harley Quinn quotes, all too proud to recite the words of one of the few female characters who's received the full film, TV, and comics treatment.

That said, Harley, and her depictions on-screen, doesn't come without issues. Some early Suicide Squad reviews have noted that her skimpy clothing and treatment in the new movie are troublesome, and she's a character who's often over-sexualized. Yet regardless of where you stand on the matter, one thing that's clear: there are multiple ways of viewing this Suicide Squad character, and quotes from Harley demonstrate this complicated conversation surrounding sexism and superheroes.

1. "Face it, Harl, this stinks — yer a certified nutso wanted by the law in over a dozen states — and hopelessly in love with a murderous, psychopathic clown."

Quinn is in an on-and-off relationship with the Joker, historically serving as his sexualized minion.

2. "You think I'm just a doll. A doll that's pink and light. A doll you can arrange any way you like. You're wrong. Very wrong. What you think of me is only a ghost of time. I am dangerous. And I will show you just how dark I can be."

At the same time, she's stood up to the Joker on a number of occasions and can embody a badass antiheroine when written in the right hands.

4. "Why can't a girl be nice to a guy without the mook trying to murder her?"

There are moments throughout her portrayal where Quinn makes light of physical torment, which might be one way comics writers try to paint her as a formidable opponent, yet it brings up important questions about abusive relationships.

5. “I’m rubber, you’re glue, whatever you say bounces off me and makes a six-inch-diameter exit wound in you.”

She can be so cleverly threatening.

Quinn has discussed herself as property and has been shown as sexually servile on some occasions.

7. "I found The Joker’s psyche disturbing, his dementia alarming — and his charm irresistible! What can I tell ya? The guy just did it for me."

Ugh. The power dynamics of this relationship have always been screwy. The Joker was originally Quinn's psych patient, but tortured her into psychosis. Not exactly a healthy bond. #OverIt

Self-awareness comes in all forms.

Clothing is clearly not Harley's priority, but in some comic iterations, it's become a big factor in her life.

10. "They've got Hello Kitty on them. They're fashionable."

I do appreciate that some writers attempt to make her high femme ball of rage.

She also makes Dad jokes, because of course.

13. "Have you heard this new Taylor Swift song? It's soooo good."

I'm rooting for Harley Quinn and hope she gets to continue showing off her complex self in the comics and the movies.