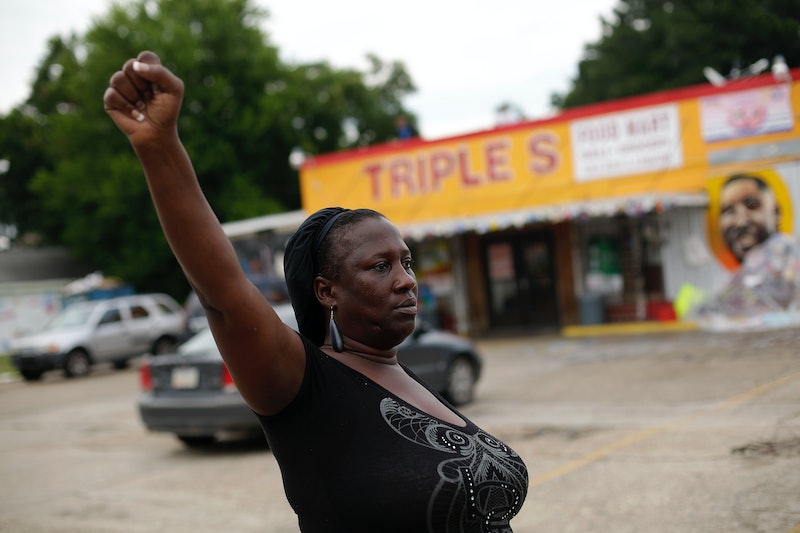 Just over one week ahead of the second anniversary of Michael Brown's death at the hands of a police officer in Ferguson, Missouri, which sparked the Black Lives Matter movement, over 50 groups affiliated with BLM released a comprehensive agenda for protecting and respecting black lives in the United States. The Black Lives Matter agenda lists demands, along with policy proposals for meeting them. Each of the six core demands detailed in the document includes sections laying out the current problem, describing legislation that could help meet the demand, and a list of resources for further learning.

"We have created this platform to articulate and support the ambitions and work of Black people," the agenda's platform reads. "We also seek to intervene in the current political climate and assert a clear vision, particularly for those who claim to be our allies, of the world we want them to help us create." The six core demands are:

The dozens of policy proposals contained in the agenda range from things we've heard recently from some politicians to more radical proposals that the movement is advancing. The agenda pushes to end private prisons and demilitarize police forces — proposals that both Democratic presidential candidates, Sen. Bernie Sanders and nominee Hillary Clinton, expressed support for throughout the primaries after encounters with BLM.

Some of the policies called for in the agenda are not usually seen through the lens of race. It expresses support for legislation against LGBT discrimination (highlighting how black members of the community are disproportionately discriminated against), opposition to the Trans-Pacific Partnership, and getting big corporate and super PAC money out of politics.

Several of the proposals in the agenda are more radical, going beyond typical topics of debate among legislators. One such proposal is to divert money from the criminal justice system into the establishment of a universal basic income, which would be provided to all whether or not they work, with extra provided to black Americans as reparations. The agenda also calls for the immediate release of prisoners incarcerated for drug crimes or sex work, along with the expunging of their records.

In addition to promoting policies which address problems confronting the black community in America broadly, the agenda features consistent attention to the intersectional realities of black members of the LGBT and immigrant communities, and solidarity with Native Americans and all those who have suffered under the oppressive forces of slavery and colonialism.

With their new agenda, movements associated with BLM are seeking to identify policies that protect the rights to healthcare, education, political power, safety, and economic well-being for those who have historically and presently been deprived of these rights. And according to the agenda's forgers, such a lofty and necessary goal requires measures which range from the adjustment to some aspects of the current system to total overhauls of others.