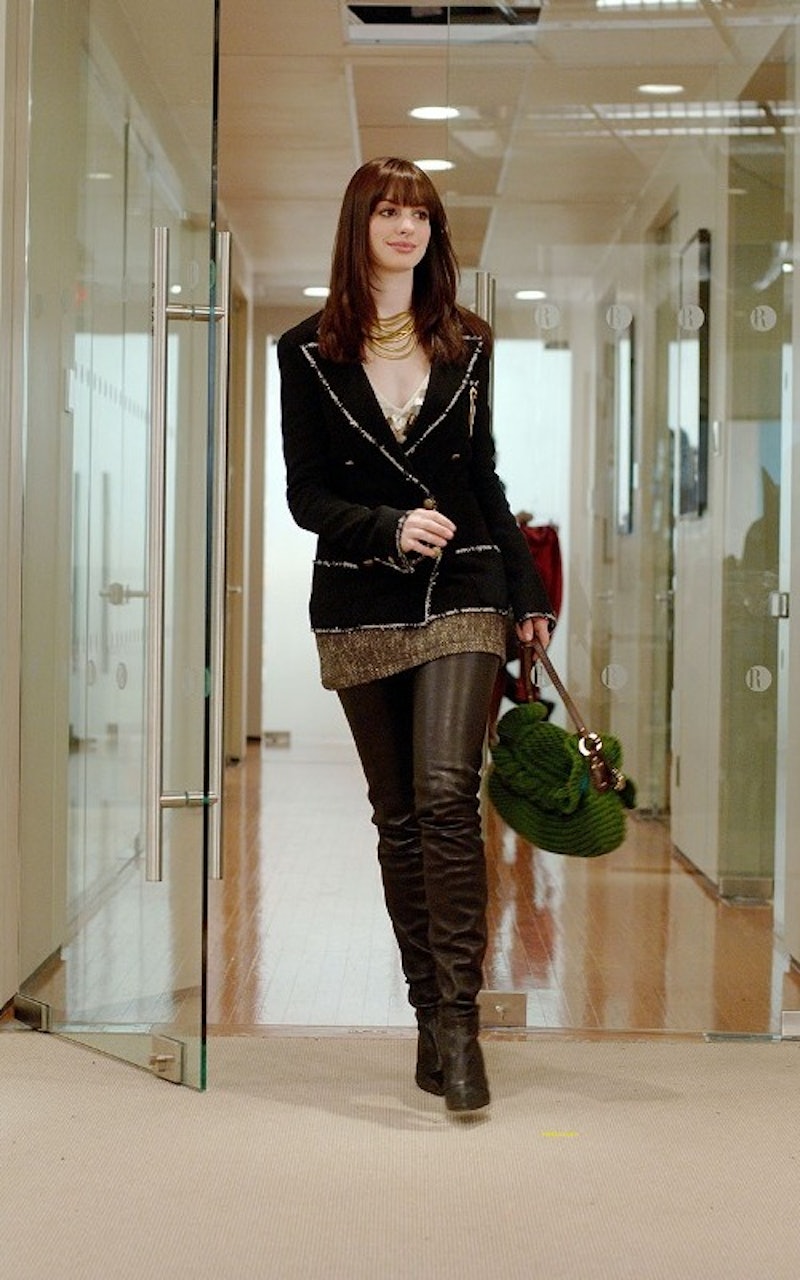 You can be really good at your job on paper, but the way you are actually going to succeed is not just by completing everything task in your job description. In order to climb the career ladder, you have to be taken seriously, and in order to be taken seriously, you need to conduct yourself in certain ways (and not in others). Here are seven steps to getting taken more seriously at work:

If we learned anything from The Devil Wears Prada , it was definitely that dressing the part is half the battle. That old adage of dressing for the job you want, not the one you have is really true. Marie Claire features editor Lea Goldman has spoken publicly and written about the power of executive presence — a force that shows people we are capable of being leaders. One of the main components of is appearance. According to Goldman, executives say appearance counts for 60 percent of your executive presence.

Of course, every industry is different. Law and finance usually have much stricter dress codes compared to, say, fashion. But some rules apply across the board: avoid too much cleavage, visible panty lines, heavy makeup, ridiculously high or flashy heels, and clothing that doesn't fit.

Plus, dressing well will make you come across as more confident. Nicole Williams, author of Girl On Top : Your Guide to Turning Dating Rules into Career Success, told Bustle that the clothes you wear correlate directly with your confidence levels. “The better you feel, the more likely you are to feel confident and fearless,” Williams says. “Work everything, including your wardrobe, in your favor."

Girl On Top: Your Guide to Turning Dating Rules into Career Success, $9.99, Amazon

Know what you are talking about.

Prepare for every presentation, brainstorm (those are only somewhat impromptu) and coffee meeting. You can only "just wing it" when you get to a certain level. If you want to pitch an idea to your boss or team, have the research done to back it up. That means cold, hard facts. If you are trying to get a promotion or raise, show your boss the evidence. Have a record of everything you have done well or taken the lead on at your company.

Respect and learn from your superiors.

This doesn't sound like a hard concept, but according to new data research from the Center for Professional Excellence at York College of Pennsylvania, young professionals right out of college are found to be quite unanimously arrogant. Fifty-two respondents said new employees arrived at the office with an air of entitlement. One reason for this behavior may be that Millennials are looking to other entry-level peers for guidance on attire and etiquette rather than to older people at the company. That's the wrong way to go. Take cues from people in the levels senior to you. You are not trying to be the coolest in the office, you are there to do a job. Be friendly (older people can be cool too). Take notes. Above all, show that you are making an effort and that you don't expect success and seniority to just be handed to you.

Yes, there was that study earlier this year about how sometimes messy chaos can create a great work environment, but "office slob" is not a title you want to earn, especially in your first few months. Keeping your desk as tidy as your appearance is another way to demonstrate to your colleagues and boss that you are serious, organized, and competent.

Be careful with your social media.

Even if your job requires you to do social media, you still have to be careful when it comes to your online profile and anything you are putting out there. It will come back to the company you work for. In addition to dressing yourself for the job you want, “Maybe it’s time to dress up your online profile picture,” Williams told Bustle. “People with photos are seven times more likely to have their profiles viewed. Having a more polished image will not only make you visible, but it also lets employers know that you are serious about representing their company in the most professional way."

Young women often get picked on for their speech mannerisms, especially upspeak, raising our tone at the end of a sentence. Perhaps because we've been found to use it more than any other group, we often get criticized for it. That may be unfair — linguists have suggested that, actually, upspeak conveys power and authority rather than weakness and ditziness. Still, there's a good chance some of your colleagues won't be into it. Especially when you're around older members of your team, be mindful of how your speech patterns and also the words you use may impact how coworkers perceive you. You don't want senior people to you to think you care more about blending in with your peers than presenting a professional appearance, and you really don't want them to think you're padding your sentences with unnecessary words ("like," "um," etc.) because you don't have anything substantive to say.

Career coach Kathy Caprino told Fox Business News, "If you are distracted by someone’s style of speech, you aren’t going to listen to the content. When you are managing or leading projects, how you communicate will absolutely make or break career opportunities, possibilities and potential.”

Try: Breakdown, Breakthrough: The Professional Woman's Guide to Claiming a Life of Passion, Power, and Purpose by Kathy Caprino, $15, Amazon

Just the slightest changes in body language can make you come off as completely competent and confident or weak and insecure. According to a study led by Amy J.C. Cuddy, an associate professor of business administration at Harvard Business School who gave this amazing TED Talk, standing in a power pose for a few minutes before an interview can actually help you get the job. At an event held by Marie Claire last fall, Cuddy said just the simplest tweaks to your body language can change your physiology and help you approach a situation completely differently.