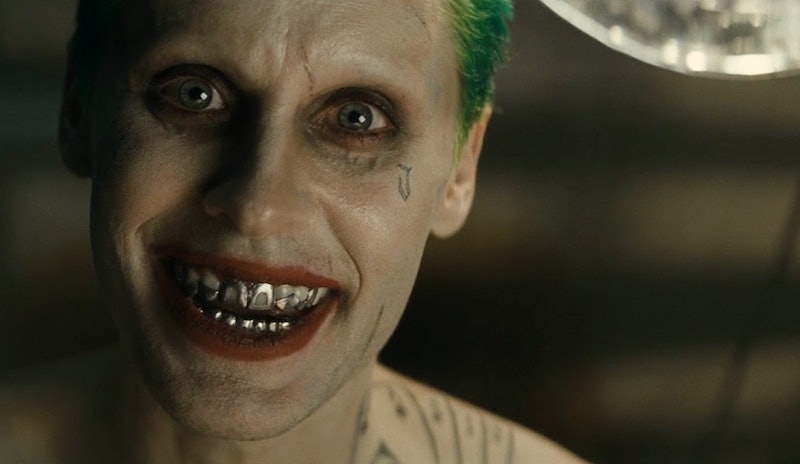 Having a secret identity when you're a superhero is about as common as dust. Meaning: everyone has one. Secret identities are prevalent everywhere, but especially in DC Comics: there's Bruce Wayne/Batman, Oliver Queen/Green Arrow, Diana Prince/Wonder Woman, Clark Kent/Superman. Every hero and villain too, for that matter, seems to have an alter ego. Suicide Squad's Harley Quinn, for example, started out as Dr. Harleen Quinzel, and speaking of the feisty supervillain, it's only fitting to wonder what, exactly her puddin's actual name is. Up until now, The Joker's real name has never been revealed on-screen, but does one exist in the comics?

Nope. The Joker doesn't have a real name — yet. DC Comics teased with the release of Justice League #50 that fans would receive the identity of the Joker, Tech Times reports. In the comics, Batman is in control of the Mobius Chair (which is an all-knowing, super powerful thing) and it could give him answers to any question he asks. So, naturally, Batman inquires two things: the name of the person who killed his parents and the Joker's true name. The chair correctly identifies Joe Chill as the man who killed Thomas and Martha Wayne, but it doesn't reveal the Joker's true name. Instead, the comic cuts away and show's Batman's shocked reaction. Later, it's revealed what the Mobius Chair told Batman: that there were three Jokers.

Three? Yes, three. So we don't know any of the names? Nope. All we know is that there are multiple Jokers (which explains how he seems to get around and escape Arkham Asylum so easily), but their true identities continue to remain secret.

It seems that DC is taking its time in drawing out the reveal of the Joker's true identity. The reveal that there are three Jokers will probably be information enough to tide Batman over for awhile — until he discovers and finds all three of them. And then he can begin inquiring into their true names. It seems just crazy enough to be true and if it is true, does one lead them or are they more of a cohesive unit? Let's say they do have a leader and there is one Joker that reigns supreme. What could his true identity possibly be?

In the alternate timeline comics like Flashpoint and Superman: Speeding Bullets readers have seen the Joker as Martha Wayne and Lex Luthor. But in the current version of the timeline, both of those options don't seem that likely. There are some theories out there that not only did Bruce's father survive the shooting, but that Thomas Wayne is the Joker. It's highly unlikely, of course, because then the Joker would be significantly older than Batman — unless the chemical vat that disfigured the Joker also preserved his body and age. There are also the other theories that the true identity of the Joker might be someone fans love and know, someone like Dick Grayson, Alfred Pennyworth, or Tim Drake.

It could also be revealed that the Joker's true name is just... well... the Joker. He might just be a character causing chaos, and nothing more. That probably won't sit well with Batman, but when and if DC Comics decides to reveal the true identity of the Joker(s), I'll be ready and waiting.