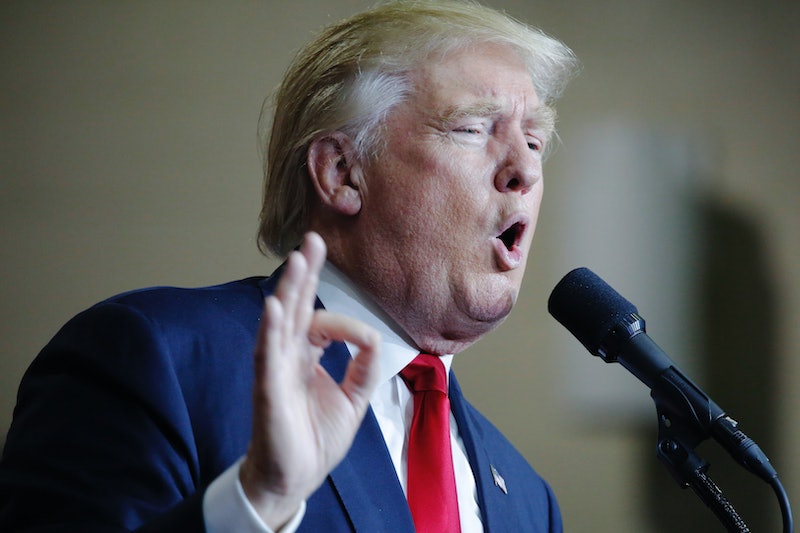 Speaking from Columbus, Ohio, Donald Trump attacked the country's Democratic process with one passing claim. "I'm afraid the election is going to be rigged, I have to be honest," Trump told a town hall on Monday, Aug. 1. He's made the same claim about the primaries, both the Democrats' and the Republicans', but this is a whole new level. So, is the presidential election rigged? Just because Trump seems to think so doesn't mean it's true.

Just to be clear, he did not misspeak. This is an actual claim the Republican presidential nominee made. Trump repeated the claim Monday night on Fox News Channel's Hannity: "November 8, we'd better be careful, because that election is going to be rigged. And I hope the Republicans are watching closely or it's going to be taken away from us." Trump was 100 percent serious, despite not having any information to back it up.

He elaborated just a bit on the show. "I've been hearing about it for a long time," Trump told the host Sean Hannity. "And I know last time, there were — you had precincts where there was practically nobody voting for the Republican. And I think that's wrong. I think that was unfair, frankly." He was referencing the 2012 election and implied that since Mitt Romney didn't get many votes in certain areas, it was irregular. But we live in the most polarized of times — and people live near people who share their views.

Looking at recent elections, there's not much to support his claim — and if there were, it would support Republicans, not Democrats. This is not Scandal after all (and if it were, remember that it was a fictional GOP presidential campaign that rigged an election in Shondaland's Ohio). Off the bat, the Republicans want to steer clear. Sean Spicer, an RNC spokesman, told The Wall Street Journal that he couldn't say what the party thinks. "I think you should seek further clarification from the campaign," he told the paper.

The most recent contentious election was in 2000. Some argue that election was stolen — and not just by the Supreme Court decision in Bush v. Gore, which ended the recount. Heather Digby Parton, blogging for Mother Jones, chronicled the purging of 12,000 eligible voters from Florida voting rolls that year. They were incorrectly thought to be felons and thus ineligible. In the end Bush "won" the state by 537 votes — far fewer than had been purged.

Parton made the case that this is part of a bigger trend of voter suppression done on the behalf of the GOP. She referenced a 2004 report by the Center for Voting Rights which laid out the "rigging" game plan as far back as 1986, when Democrats retook control of the Senate under Reagan. A group called the Republican National Lawyers Association allegedly used voting laws around the country to tilt the electorate Republican, she and the report argued.

Now Ari Berman, writing for Rolling Stone, explains how it is on the verge of happening again:

The latest purge comes on the heels of a trio of new voting restrictions passed by Florida Republicans last year, disenfranchising 100,000 previously eligible ex-felons who'd been granted the right to vote under GOP Governor Charlie Crist in 2008; shutting down non-partisan voter registration drives; and cutting back on early voting. The measures, the effect of which will be to depress Democratic turnout in November, are similar to voting curbs passed by Republicans in more than a dozen states, on the bogus pretext of combating "voter fraud" but with the very deliberate goal of shaping the electorate to the GOP's advantage before a single vote has been cast.

That's terrifying, but if anything, it would help Trump. Most of the "rigged" elections over the years would have helped him. Think of the first U.S. elections when only white, land-owning men could vote. That's one scenario under which Trump could actually win — even more so if there were a literacy test, something that many states implemented after the land requirement was scratched.

Only recently have elections not been "rigged." Even long after black Americans were awarded the vote, Jim Crow laws made it all but impossible for them to exercise that right. Those challenges have not ended, but rather taken on different names under new policies — as Michelle Alexander's The New Jim Crow so painfully details.

Luckily, there have been some great rulings staying the Florida voter rules, for now, and overturning voter ID laws in North Carolina and now in North Dakota, too. But it's still far from one person, one vote. Talk to the people from Washington, D.C., who are underrepresented in the Electoral College. Or the Puerto Ricans who get no say at all.

If only Trump were advocating an end to voter suppression. But he isn't. Instead, he's just laying the groundwork for an excuse to his upcoming November loss.