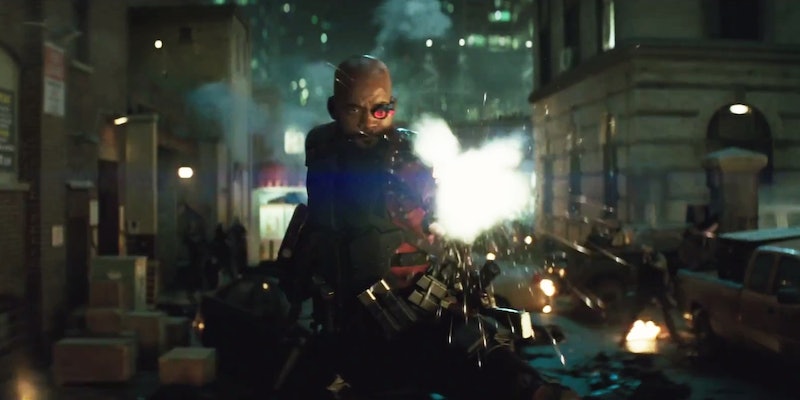 Will Smith is no newbie to action movies, but Suicide Squad is new territory for the actor for one particular reason. In previous films such as Men in Black, I, Robot, Hancock, and I Am Legend, Smith has always played the powerhouse protagonist ready to save the world from evil. But in Suicide Squad, in theaters Aug 5, Smith plays supervillain Deadshot— one of the "bad guys." Smith's appearance as Deadshot has been highly anticipated, with both DC comic fans and Smith's own fanbase looking forward to seeing how the actor portrays an antagonistic character. So if all goes well, will there be a Deadshot spinoff? Here's hoping.

There haven't been any whispers about a potential Deadshot movie, but it's definitely not the most outrageous notion in the world. After all, Suicide Squad has already been projected to rake in as much as $140 million its opening weekend, and the studio will surely want to capitalize on that success with additional films. And given the fact that most everything Smith touches turns to cinematic gold, it's plausible that the actor would be involved in any plans for followup movies. However, the politics of Hollywood are never simple, so there are many factors that could play into whether or not a Deadshot spinoff happens. Here are some reasons that the movie could happen, and some reasons that it might not be so likely.

For: Will Smith Is A Huge Star

As I mentioned, Smith is a profitable A-lister, and a Deadshot movie could pull in big audiences between fans of the superhero and fans of Smith's previous work. The potential of such a moneymaker would be pretty good motivation for Warner Bros to start storyboarding Deadshot: The Movie.

Against: ...Will Smith Is A Huge Star

Smith's star status means that he doesn't have to take any role if he doesn't feel like it— he already has plenty of fame and fortune, so he could choose to turn down a Deadshot movie offer. Also, even if Smith is on board for a Deadshot spinoff, his schedule might not allow for a big chunk of time to shoot a blockbuster in the near future.

For: DC Is Known For Making Spinoffs

Wonder Woman, The Flash, Aquaman... all of these comic book figures are getting their own spinoffs, so it seems logical to think that the same could happen for Deadshot.

Unfortunately, all of DC's upcoming movies for the next four years have already been announced — and Deadshot isn't on the list. So a spinoff featuring the antihero would either be a surprise addition, or else it wouldn't be happening until after 2020.

The odds may not be great for the prospect of a Deadshot movie, but crazier things have certainly happened. And since the members of Suicide Squad are all known for being wildcards, an unexpected spinoff could be perfectly in character for any one of them, Deadshot included. Smith fans, keep your fingers crossed.