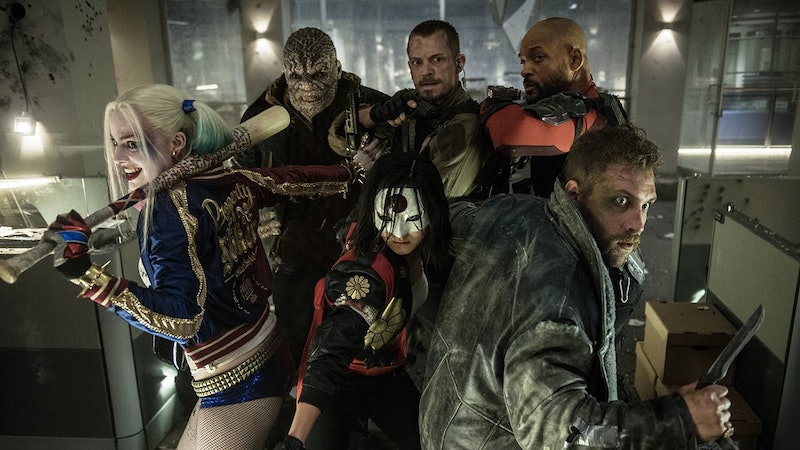 One of the best parts of going to see a superhero movie is seeing how many Easter eggs and references you can find to the greater on-screen universe. Whether it's a film made by Marvel, DC, or some other studio, there's a high chance that if superheroes are involved, there'll be plenty of shout-outs to the "world" they live in and previous movies made by the company. Despite being about supervillains, not superheroes, the latest DC movie to hit theaters, Suicide Squad, is no exception. There are a bunch of great Suicide Squad Easter eggs and references that you can catch in the new movie, all pointing to the bigger picture of the movie's universe.

Compared to a film like, say, Captain America: Civil War or X-Men: Apocalypse, Suicide Squad doesn't have that many huge references to previous films or to its bigger world, but it does have enough that DC fans will certainly leave the theater happy. When you go to see the movie, see how many you can catch for yourself, but otherwise, here are the nine biggest DC Easter eggs and references in Suicide Squad . Obviously, spoilers ahead, so read on with caution.

Throughout the film, it's made clear that it's Bruce Wayne's company that's funded the capture of the Suicide Squad members in prison, and both the organization and its leader play a substantial role in the background of the movie.

The Flash (Ezra Miller) makes a quick appearance in Suicide Squad, during a scene with Boomerang. He also is shown in photo form all the way at the movie's end — more on that later.

In a nod to the events of Batman v Superman, Suicide Squad references the death of Superman.

Although her outfit in the film is significantly different than in the comics, Harley's "Daddy's Little Monster" shirt, multi-colored hair, and short shorts are still nods to her famous jester uniform.

The famous DC hospital makes an appearance in Suicide Squad, as Harley once worked there as a psychiatrist.

In an interview with Yahoo! Movies UK, Suicide Squad director David Ayer revealed that the Joker's many tattoos are meant to be Easter eggs, telling stories about his character and his history in the DC world.

Screenrant noted that one of the Joker's henchman is not a random guy, but Jonny Frost, known in the comics and graphic novels as the right-hand man to the evil character.

Screenrant also caught that the bag that holds Boomerang before he's released at the army base is an Australia Post mailbag, a reference to the character's Australian roots.

The movie's post-credits scene clearly sets up Justice League, as it features Amanda Waller meeting with Bruce Wayne. She gives him files on future Justice League members in exchange for his protection.

Did you catch all those references? Suicide Squad is chock-full of fun nods to its bigger world.