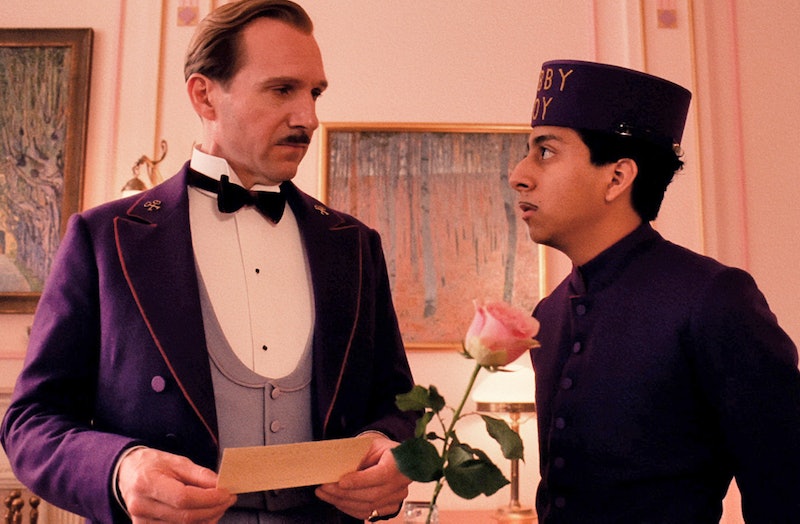 Muscular dudes in ancient Roman gear and heavy CGI ruled the box office this weekend, with 300: Rise of an Empire taking the top spot. On a very different spectrum in terms of type, tone, and creative stylings was Wes Anderson's newest, The Grand Budapest Hotel , which didn't hit it big against the 3Ders with the box office numbers but which performed remarkably well in the few theaters it did find itself opening in this weekend. First, the numbers for wide release: 300: Rise of an Empire brought in $45 million, with Mr. Peabody & Sherman coming in second with $32.5 million. Liam Neeson's probably pretty pleased that his Non-Stop came in third with $15 million, and The LEGO Movie's still holding in there with fourth.

As for Grand Budapest: It only opened in just four theaters this weekend, but managed to rake in $800,000 — AKA $200,000 per screen, AKA a lot of dough, AKA what Variety just called "the best-ever opening per-screen average for a live-action film." Dayum. As Fox Searchlight's Frank Rodrigues told Variety, "We always thought that Moonrise [Kingdom] was a really commercial film, but seeing this, it’s clear that Wes Anderson’s core fanbase is broader than we thought." (You can read more of his comments here).

So let's slow-clap it out for Wes Anderson, for managing to make box office gold in just four theaters.

More like this
Jennifer Coolidge Hunted For Jewels & Lashes In J.Lo’s Hotel Room
By Jake Viswanath
Owen Thiele Asked Sundance Attendees About Films That Don’t Exist
By Grace Wehniainen
Keke Palmer Shares The Sex Of Her & Darius Jackson's Baby
By Jake Viswanath
At 28, Rosie Perez Risked Her Career To Stop Playing Stereotypes
By Gabrielle Bondi
Get Even More From Bustle — Sign Up For The Newsletter
From hair trends to relationship advice, our daily newsletter has everything you need to sound like a person who’s on TikTok, even if you aren’t.