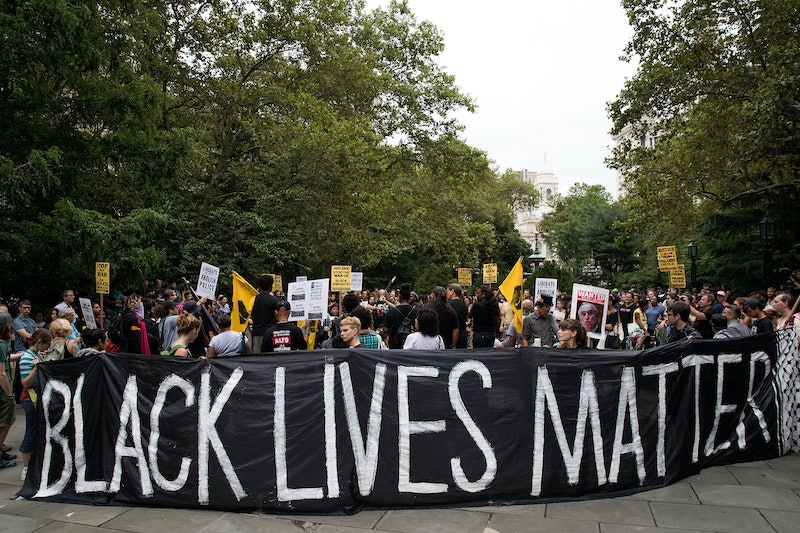 A photo that went viral from a Black Lives Matter rally held in Los Angeles in mid-July, was re-circulating again on social media Monday. And the photo, which features two Latina women dressed in Brown Beret uniforms alongside two men from the Nation of Islam, speaks volumes about the Black Lives Matter movement and the reach its members have had on the country in the few years since it's been around.

The July 10 Black Lives Matter protest made headlines when traffic was briefly blocked on the 405 Freeway, but the photo from that same protest featuring two women dressed in Brown Beret attire sparked a conversation about the different faces of the BLM as well as the solidarity shared among different minority groups in the wake of the national protest movement.

The photo was taken by East Hollywood photographer John Garcia, who described to Fusion media that the photo provided a unique dimension to the footage usually associated with the protest movement. "This picture shows the Brown Berets, the brownest of the brown, standing side by side with black people without an issue," Garcia told Fusion. Which is all part of the reason why this photo is so evocative.

The Brown Berets grew out of an L.A.-based group formed in the 1960s called the Young Citizens for Community Action. Often dressed in an attire that resembled that of the Black Panthers, Brown Beret members focused on the economic and social inequalities that Latinos faced in the area and the country at large during the civil rights movement.

While the activism of the Chicano Movement has somewhat disappeared from the national spotlight, the Brown Berets have become involved with BLM activists, throwing their support to the movement, according to Fusion. And there is a bit of history here that adds more to the photo: Fusion reported there had been tension for years between the black and Latino communities of South Los Angeles, among both gangs and elected officials, exacerbated by conflict over housing and schools. More recently, however, it has somewhat subsided, in part because of protests and police-related deaths in the area.

The current Commander of the Berets, Chimalli Cuetlachtli, has gone on the record saying that the group is supportive of Black Lives Matter. It is "extremely important that the world understands that we are in a fight for human dignity and basic human rights," a post on the Brown Beret Tumblr page, black-brown-proud.tumblr, read.

One of the major platforms of the BLM movement addresses aggressive policing and the lethal force that police have used in escalated altercations with minorities. It is a discussion that is not unfamiliar to the Latino community. In a study conducted from 2000 to 2014 by the Los Angeles Youth Justice Coalition, at least 589 people have died from the use of lethal force in the L.A. region alone. From 2007 to 2014, 53.5 percent of those killed were Latino, and 28 percent were black, the study showed.

The injection of the Brown Berets community into the BLM movement only furthers illustrates how many people have been affected by the issues Black Lives Matter is fighting for. The protest movement has been criticized for being too narrowly focused, but it has also drawn attention to different groups affected by racial profiling, including trans women of color who have been killed in police-related shooting.

The BLM campaign, which began after the unarmed black teenager Trayvon Martin was killed by community watch volunteer George Zimmerman, has changed shape since 2013. But as the movement continues to grow, it is important to look at all the groups who are seeking to speak and be represented in the national conversation about racial profiling.