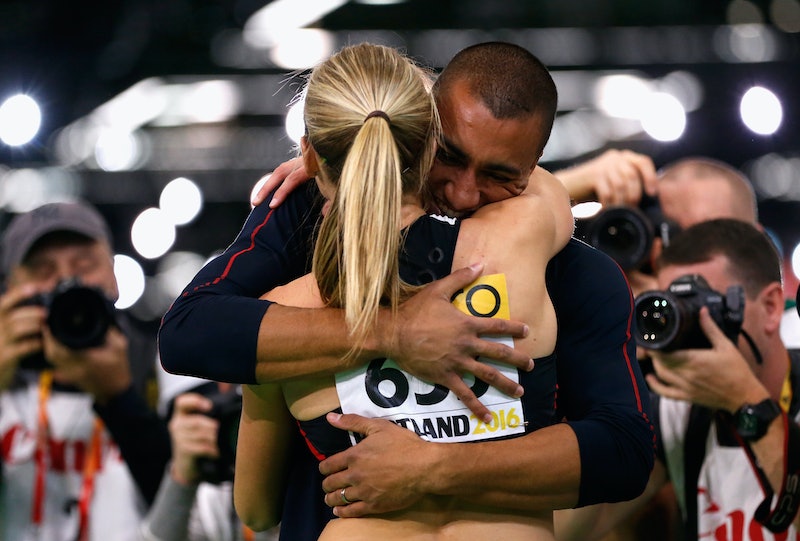 There are some celebrity couples you see together and you think, "They could not be more opposite! What are they doing together?" But then there are other couples who are part of the same social group or industry or sport, and you think, "They are too perfect to be real." Enter Ashton Eaton and Brianne Theisen-Eaton, track and field stars and Olympic champions from the United States and Canada. Their perfection is too strong to ignore, because they don't just run the same event, but they run the same event that you would never think would bring two people together — decathlons and heptathlons. But for these two, there wasn't anything else that could help them fall in love. So, how exactly did Eaton and Theisen-Eaton meet?

The couple, now gearing up for the Games in Rio and deemed the "Olympic Power Couple," has been training together and dating since 2008. And where else would they meet but the school that helped them reach their goals for Olympic glory and world record breaking greatness? According to an interview Eaton did with UO Alumni, they met at the University of Oregon, for which they competed as decathlete and heptathlete at the Brazil and Berlin World Championships in 2008 and 2009. And while in Brazil during Eaton's sophomore year and Theisen's freshman year, the two found each other through the sport they love and the sport that eventually got them to the 2012 London Olympics, and to their marriage in 2013.

"It was cool how we met through track in Brazil, basically, and then did all these things," Eaton told UO Alumni in a 2013 interview. "All these dreams and goals of going to the Olympics together, and then actually doing it, was very cool." Cool? That's an understatement. For a couple as dedicated to the time consumption of decath- and heptathlons, and to the work it takes to keep their marriage light within the heaviness of competing against each other, isn't just cool. It's incredible. In an interview with People, Eaton talked about that international competition within the marriage. "When we're competing at the same meet, even though she's Canadian and I'm American, we're very much rooting. We call it 'Team North America.'"

And just when you thought they couldn't get more adorable, they have a shared Instagram account called "We Are Eatons," which they have turned into "a brand and movement inspired and created by Olympic athletes Ashton Eaton and Brianne Theisen-Eaton," according to their Instagram bio. Their goal is to not only push and inspire and help each other, but push and inspire and help other athletes, Olympic or just beginning, to reach their ultimate goals. From eating properly to training hard to remembering to have fun, these two share an enthusiasm for sports and for each other that every couple can learn from. And to think, it all just started when they were 19 and 18 years old. Can you say, "meant to be?"