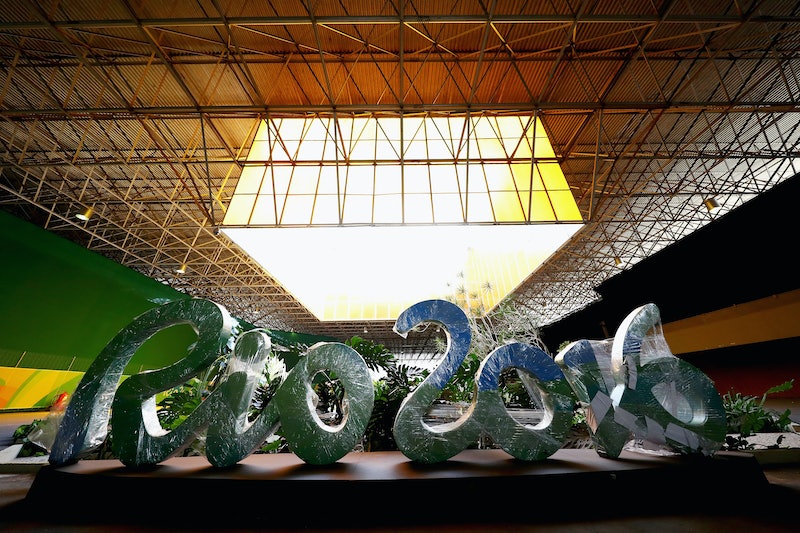 The official countdown has begun — the Olympics begin on Aug. 5. But, before the sports competitions go into full swing, the 2016 Rio Olympics Opening Ceremony will start off the festivities with a bang. Like every other opening ceremony, it will focus on the rich culture of the host country with dancing, music, and tributes to everything from the Brazilian rain forest to its famous carnival. Although nothing has been confirmed, The Daily Mail reports that "The Girl From Ipanema" will be performed and Gisele Buchenden will play the aforementioned girl. It seems highly unlikely that the iconic Brazilian bossa nova jazz song will not be part of the ceremony — so in preparation let's take a look at "The Girl From Ipanema" lyrics.

Although it hasn't been confirmed who will be doing the actual singing on Aug. 5, the song was initially written by composer Antonio Carlos Jobim and poet Vinícius de Moraes in the early 1960s. When the song took off worldwide, the Portuguese lyrics were translated into English by Norman Gimbel. It's being played at the Opening Ceremony for good reason — it's the country's most famous song and people still can't get enough of it over 50 years later. Let's take a listen to the original recording:

Although I'm definitely partial to the Portuguese version, I'm glad we have American lyrics and recordings so everyone can appreciate the song's message. Here's a look at the translated lyrics, courtesy of LyricsPlayground.com:

But each day when she walks to the sea She looks straight ahead not at he Tall and tanned and young and lovely The girl from Ipanema goes walking And when she passes He smiles But she doesn't see No she doesn't see She just doesn't see...

The song will likely be performed in Portuguese at the Opening Ceremony, but here's a listen to Frank Sinatra's famous English version:

The lyrics are fairly simple and straightforward — but on the song's 50th anniversary, The Wall Street Journal explained why it's just as beloved in the 21st century as it was when it was first released. The newspaper believes that it is because the girl in the title epitomizes "sultry pulchritude" and she's "utterly unobtainable." Gimbel, who penned the English version, stated that:

"It's the oldest story in the world... The beautiful girl goes by, and men pop out of manholes and fall out of trees and are whistling and going nuts, and she just keeps going by. That's universal."

At first listen, I had concerns that it objectified a young woman — it undeniably is about catcalling and viewing women as objects who are solely there to satisfy the male gaze. That's a very real part of life that many of us continue to experience. However, the inspiring part of the song is that the young is completely unaffected by this attention or allow it to influence her in anyway, illustrating her strength. The woman's response is a positive message for women everywhere.

I can't wait to see this catchy classic (hopefully) be performed in the city where it was written.