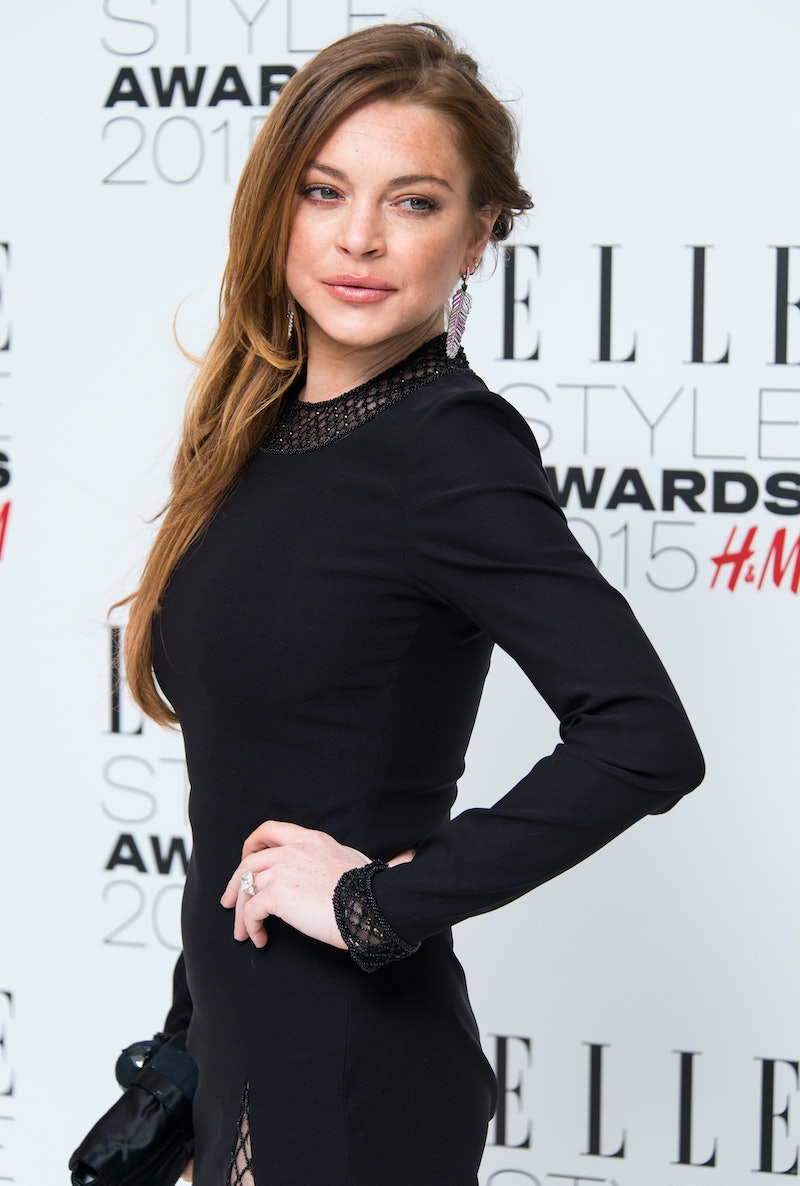 Despite a confusing social media post and a claim from her estranged father Michael Lohan, Lindsay Lohan's mom is not claiming Lindsay is not actually pregnant, according to TMZ. The site claims Lindsay's mother, Dina Lohan, stated that the Mean Girls actor declared that she was pregnant because Lindsay "was just trying to get revenge on [fiancé] Egor [Tarabasov] — whom she accused of cavorting with a Russian chick — when she claimed she was pregnant," to use TMZ's words, as Dina was not directly quoted. Per TMZ, "Dina now says Lindsay was distraught and just 'overreacted.'"

Bustle previously reached out to Lohan's rep regarding the pregnancy claims, but did not receive a response.

It's been a difficult, messy, and all-too-public ride for the troubled star and Tarabasov as of late. In late July, Lindsay shared a series of social media posts that seemed to accuse her boyfriend of infidelity. To add to the drama, she also tweeted a still from her ABC Family movie Labor Pains along with the caption, "lindsay lohan labour pains trailer - I am pregnant!!"

Things only got worse from there, after video footage that appeared to be of Lindsay crying and screaming on her balcony, accusing Tarabasov of abuse. (Tarabasov has not commented on the matter and could not be reached by Bustle A rep for Lohan told Page Six at the time: "Lindsay believes Egor has anger-management issues and she would like him to go to therapy. They both want to work things out. I cannot confirm her pregnancy.") For her part, Lindsay took to Instagram to release an apology and statement about some of the recent events that had transpired, though she did not comment on her alleged pregnancy:

The rumors surrounding Lindsay's personal life only grew after her dad claimed to Page Six TV that his daughter had confirmed her pregnancy to him via text, allegedly writing, "Daddy, I'm pregnant."

"She texted it to me and told me … I don't know [how far along she is]," he claimed just last week.

Two days after this admission, Lindsay came under fire after paparazzi photos came out that appeared to show the 30-year-old star drinking and smoking while on a yacht in Italy.

However, with Dina's alleged statement to TMZ, it seems as if Lindsay may not actually be pregnant after all. And as for her relationship with Tarabasov, reportedly, they are still engaged and are trying to work things out.