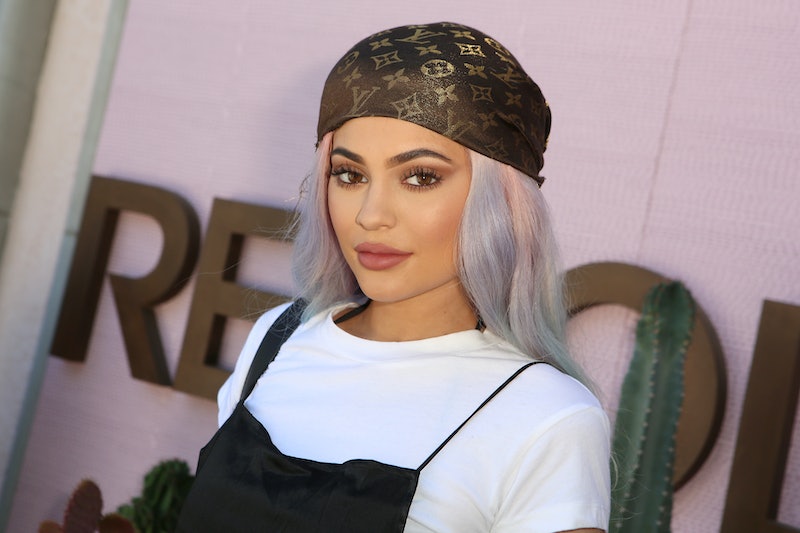 One might argue that Kylie Jenner is barely a '90s kid, considering her 1997 birthday likely means she didn't experiment much with the decade's aesthetics. But that doesn't mean Kylie Jenner wearing '90s trends circa 2016 isn't a reality. In fact, the TV star and makeup mogul has made many '90s looks entirely her own. In the worlds of both beauty and fashion, the youngest Jenner often draws much inspiration from an era that style refuses to let die.

But Jenner is far from the first Keeping Up With The Kardashians star to embrace '90s style, with each sister representing the decade in her own way. Of all the siblings, however, I think King Kylie wears '90s trends the most often and the most authentically. Even her own makeup line, Kylie Cosmetics, brings back '90s beauty looks on the regular.

It's sometimes difficult to overlook just how much of the '90s sticks around in style — both in the mainstream and in high fashion — until you really sit down to look at it. But of all the celebs who love wearing '90s trends both through their wardrobes and their makeup bags, Jenner is definitely amongst the only ones doing it nearly daily. And who can blame her? Everybody loves the '90s. Here are 15 times she proved just that.

Even in her own makeup line, Kylie Jenner made sure to stock the perfect brown liquid lipstick so that her fans, too, could represent this '90s trend just as well as she does.

Personally, I'm so glad for the return of baseball caps. They are the ultimate in casual chic.

Sneakers have returned in a big way these past couple of years, but of course Jenner's are bright silver.

A simple, oversized denim jacket will always be fashionable, but in the '90s, they were especially in vogue. I think it's fair to call this look a '90s throwback.

These are chic and practical, although I doubt many people had a legit mini Gucci backpack in the '90s.

Both a '90s and early '00s staple, we rarely see bandanas rocked on humans anymore. Which is a shame, because Jenner already showed us how to pull them off.

This sequined Discount Universe bikini wouldn't have looked out of place at a '90s rave and it looked absolutely perfect on Jenner at Coachella.

I vividly remember trying to recreate this look in black after seeing Winona Ryder rocking it, but Jenner gave it a bit of a modern edge by sporting a brilliantly blue blazer.

Slides came back with a vengeance in summer 2016 and I can totally understand why. This fluffy pair is comfortable and cool.

I can never decide whether I like camo or not, but it was definitely huge in the '90s. So of course Jenner has worn it.

Fingers crossed that the choker trend never leaves us, especially when paired with an entirely matching two-piece.

What I think makes Jenner's '90s looks so desirable is that she never really changes the trends to suit her own glam aesthetic. Instead, she embraces '90s looks just how they are and celebrates them for everything they once were.

More like this
Here Are All 703 Outfits Rachel Wore On Friends
By Kat George
Dua Lipa On YSL Beauty, Plus Her Fearless Approach To Hair & Makeup
By Erin Stovall
12 New Year's Nail Ideas That Are Truly Stunning
By Jordan Murray
Dua Lipa Rocked A Naked Dress With Patrick Star Nipple Pasties
By Allie Fasanella
Get Even More From Bustle — Sign Up For The Newsletter