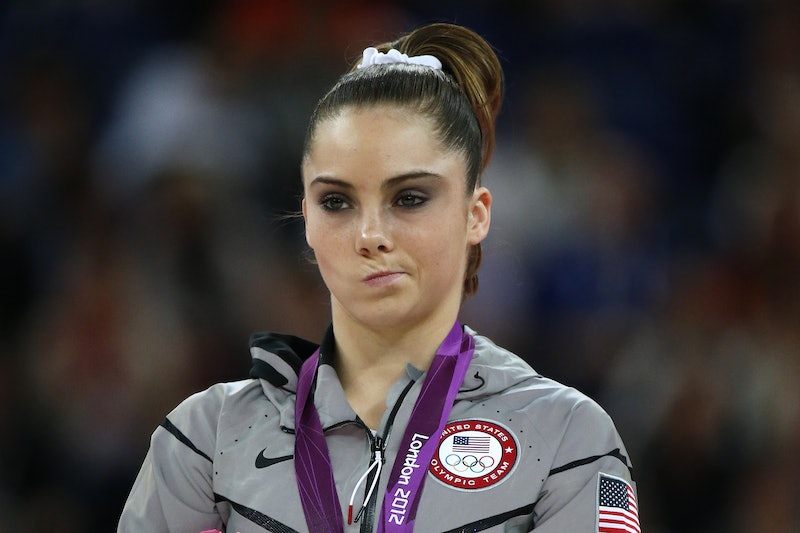 All Olympics fans will remember McKayla Maroney, who was, famously, not impressed by the 2012 London Olympics. The famous gymnastics champion, who inspired us all with her classic facial expression and her domination at the competition — she took home a Silver medal for Vault and a Gold as part of the U.S. team known as the "Fab Five" — isn't competing at the 2016 Rio Olympics, but that doesn't mean fans still didn't want her to make an appearance. Yet McKayla Maroney wasn't at the Olympics opening ceremony, sadly, and it's not looking likely that she'll show up later in the competition.

After announcing her official retirement from competitive gymnastics in February, it's no surprise that Maroney chose not to attend the festivities. But, if she isn't at the Rio Olympics, where is she, and what is she up to now? Well, since winning Olympic Gold and becoming an Internet meme known all over the globe, Maroney has been busy, competing professionally until her retirement. After returning home from the London Olympics, she signed with Adidas in 2013 and continued to compete in gymnastics. In 2013 she placed first on vault in the Secret U.S. Classic and earned a gold medal for vault at the P&G Championship. That same year, she also competed in the World Artistic Gymnastics Championships with the U.S. team, earning her second world title in vault.

But, as with many of the world's best athletes, Maroney's success cost her more than a few injuries, and, following a 2014 knee surgery, it appears that her heart just wasn't in it anymore. "I'm just ready to put my worth and value into something else," Maroney told GymCastic (via Sports Illustrated ) when she announced her retirement.

Instead of gymnastics, Maroney has set her sights on a career in the entertainment industry. While she has dabbled in acting since her time at the Olympics, appearing in six episodes of The CW's Hart of Dixie and an episode of Bones, Maroney doesn't want to be an actor, but a singer. "For the last year I've dedicated all my time to writing/making music, and I can finally officially say that I've got some cool stuff on the way for u guys [sic]," Maroney wrote on Instagram in July. In fact, Maroney is getting ready to release her new single right around the same time her old teammates will be coming home from Rio. "Ghost," Maroney's debut single, will drop on Sept. 8. "I've loved music since I was like, eight years old. I would write songs," Maroney said in a recent interview with ET.

Maroney has yet to truly show off her vocals to fans — what looks like an official YouTube channel has no content, and she has yet to tease any of her music on Instagram. However, she did participate in a One Direction sing-along video for USA Gymnastics in 2014, though it's likely that her music won't sound anything like this.

Here's hoping Maroney is as successful on the stage as she was on the vault.