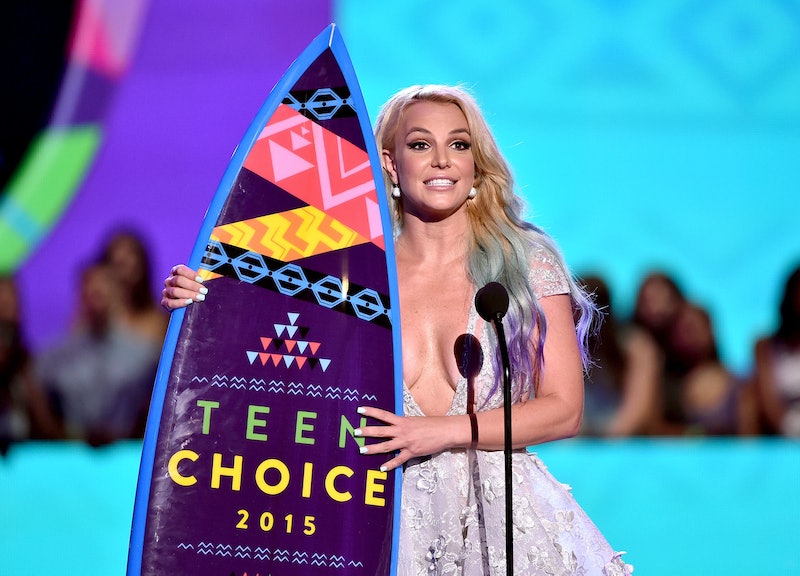 This year has been all about the surprise, short-notice album drop (see: Rihanna, Drake, Beyoncé), so, given the fact that Britney hasn't released an album in three years and yet has been queuing up singles and music videos, we really should have seen this one coming. All your hopes and dreams have come true, and the one true ruler of the pop throne is finally making her 2016 release. The new album has a great, happy, sunny name: Glory. Plus, the release date of Britney Spears' new album, Glory , is August 26 — you know, right when you're getting some depressing back-to-school vibes and need the kind of perking up that only Britney can provide.

Spears announced the glad tidings via Twitter on Wednesday, and, if you're all about paying it forward and actually supporting the music industry with cold hard dollars as well as streams, then you can pre-order her album starting midnight Wednesday, Aug. 3 via Apple Music. Come on, guys. You know as well as I do that Spears is basically the hardest working woman who ever lived, and it's a miracle her vocal chords/dancing muscles are still in working order. Can we show this woman some love? But first, check out this sweet, sweet cover:

Nice, right? It's flattering, and it's mature. One point, Britney. And if you needed added incentive to pre-order the album, then check out this:

A private show? OK, I'm not sure how this can possibly be a physical private show since surely Spears' fans are based all over, but I'm calling it: This could be a live digital event, right? Maybe one with those purchasing the album getting a code and being party to an intimate digital concert, which would also be pretty damn cool. If you're wondering what the new album will be about, I've got your back.

In her Aug. 1 interview with Australian radio station 2Day FM, Spears confirmed the album will be have themes of female empowerment, intimacy, and being in love and a "hopeless romantic." She also talked about her tongue in cheek take on the usual gender dynamics, describing her latest music video centering on her with some female friends making "guys audition for us." So, in short, your usual naughty Britney mix of flirty fun and real emotions. So what are you waiting for? Stay up late and make sure you'll be one of the first people in the world to hear Spears' new album. I'm absolutely positive it'll be Glory-ious.