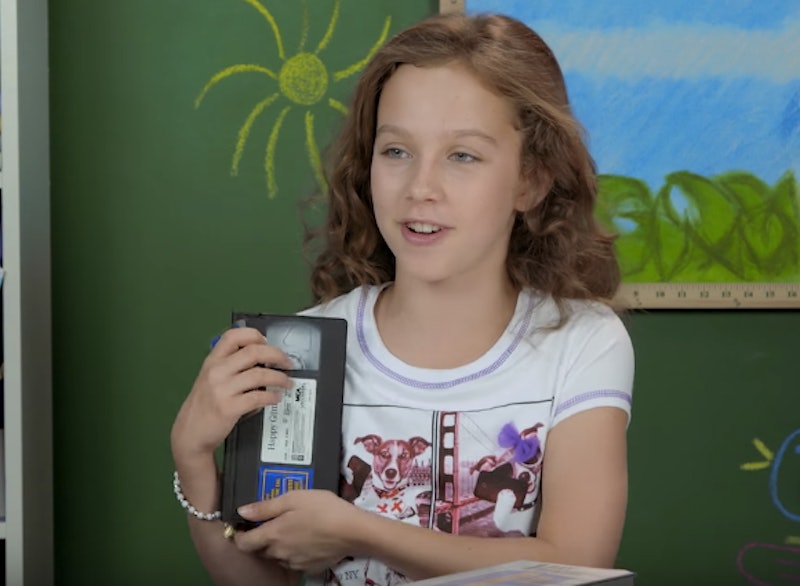 Piling in the car to take a trip to the local video rental store was a major part of my childhood; I remember so clearly arguing with my little brother about what to rent (duh — The Princess Bride for the hundredth time). In the latest video by Fine Brother’s Entertainment, today’s kids react to Blockbuster Video and if you were born in the '80s or early '90s, it will make you feel so very very old.

These days, kids are used to renting movies off of streaming services like Netflix and Hulu, so even the concept of a bricks and mortar location seems unnecessary to their young minds. They have no idea what it meant to get your hands on the last available VHS of that hot new release ('cause there were only like five available at a time, right?). They never will have to experience the crushing defeat when your movie of choice is already rented and you have to pick something else. The interview subjects are all between the ages of seven and 13, and sadly, most have no idea what a VHS even is! One suggests that the clunky thing looks like a book. Ugh.

But before I work myself into a "kids these days..." rant, I should remind myself that it makes perfect sense that they wouldn't understand the concept of Blockbuster. The company filed for bankruptcy in 2010, in 2013 it announced that it would soon shutter all its existing locations. Today there are only an estimated 50 franchises in operation (mostly in Texas and Alaska). The company that started in 1985 and grew exponentially to have about 9,000 stores at its peak in 2004 has gone the way of beeper stores and typewriter repair shops. At least you can nurse your nostalgia by watching these children and pre-teens try and wrap their minds around video rental procedures of yore.

On Being Told That You Couldn't Always Rent The Movie You Wanted:

Today, you can rent movies from the comfort of your own home and never worry about a film being unavailable. We forget that in the bad old days many wars were waged in Blockbuster over a movie Plan B, and usually you just ended up renting something you had already seen and kinda liked. One kid likens Blockbuster's business model to "the library, but with film." I never thought of it that way...

On The Dreaded "Late Fees":

The kids were incensed to learn that if you couldn't drive to the video store and return your movie on time, that you would have to pay even more money on top of what you paid to take home the video in the first place. The concept was completely foreign to them and the existence of a one-day rental seemed particularly cruel. "What if you don’t finish it?" one girl exclaimed. Another described these late fees as "inhumane" — an assessment that I agree with entirely.

On Seeing A VHS For The First Time:

For all the amazing and painfully honest reactions watch the entire video here:

These kids may think of Blockbuster as “kinda like Redbox but an actual store,” but I will always remember the days when every film buff flashed their membership card with pride.