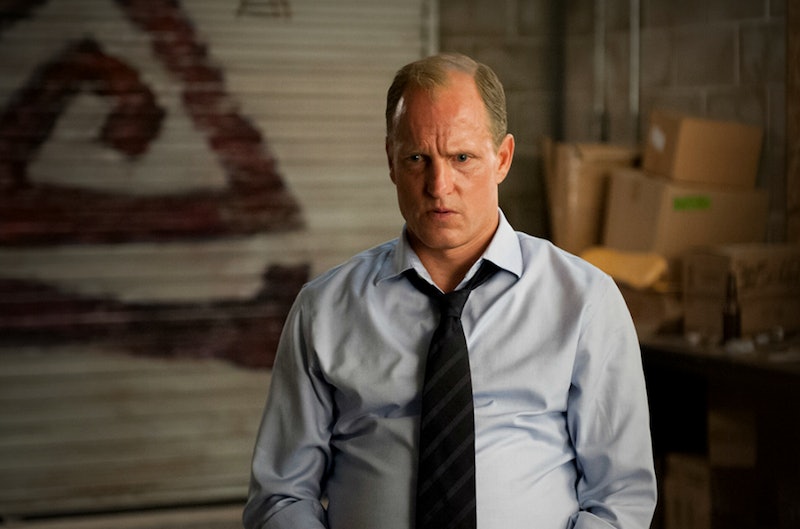 It's finally over. True Detective has finished up its first season with a spectacular finale and we've finally got a resolution — sort of. After last week's episode revealed the Spaghetti Monster, the landscaper from the Tuttle school, Rust and Marty had to spend the first half of the finale getting to the conclusion we'd already reached and once they did, we were in for 15 straight minutes of agony. But as shocking as their bloody showdown with the scarred villain was, it was what followed that was the real surprise.

Like creator Nic Pizzolatto teased in an interview with The Daily Beast, the finale didn't pull any punches and the conclusion was about as straight forward as can be. There was no secret murder plot twist. There was no detail we'd missed. Our villain was standing before us with a fake British accent, a very unhealthy relationship with his half-sister, and a target on his back. The spectacular showdown in the eerie underground lair, also known as Carcosa, was tough to watch as our scarred villain violently stabbed Rust in the stomach, lifting him into the air and then coming after him with a hatchet before Marty came in and shot him multiple times. But this creep didn't go down easy; he threw the hatchet at Marty and kicked his gun away — stupidly, right to Rust who shot him in the head. In the end, there's blood everywhere and our heroes are left lying together, uncertain about whether or not they'll escape this heroic endeavor alive.

But when they do, they wind up in the hospital, where both have miraculously survived — and that survival isn't even the most surprising moment of the episode. It's that in the series final moments, we get a simple, candid conversation between two friends. Marty takes Rust out to the parking lot to have a smoke while the doctors aren't looking, and there, in his dressing gown and wheelchair, Rust delivers one last monologue. But this one isn't meandering or all that philosophical: in the moments where he almost died, he felt connected to his deceased daughter. He says he could "feel her love" and now that he's back to consciousness, he can't any more.

Marty responds by comforting him and then acquiescing to Rust's request to help him leave the hospital before they discharge him. Our final scene is of these two old friends hobbling away from the hospital with injuries galore and a patched-up friendship. They vanquished the dragon — even if, as the newscast tells us, they didn't manage to pin any of the crimes on the Tuttles — and they lived to tell the tale. Rust's in a terrible mental state, but for the most part, the finale ended on a high, happy note, against all odds.

And the truly surprising thing is that now that we've seen this simple end that defied all our crazy theories and expectations, it's clear it's the most perfect way for this dark Louisiana journey to end.