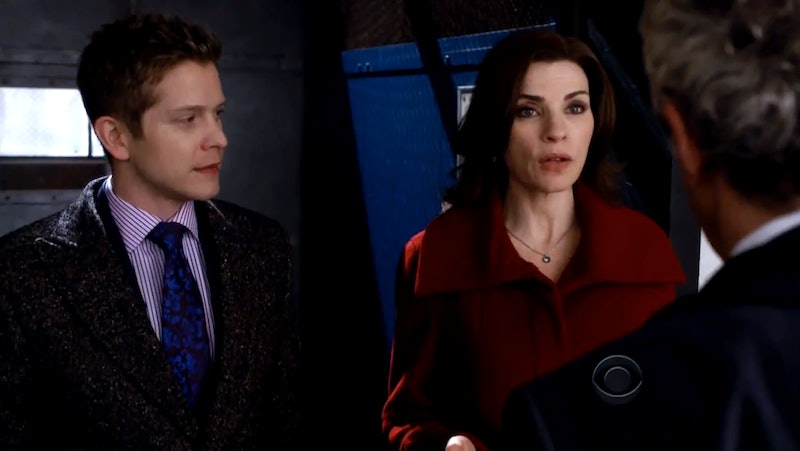 Last night, The Good Wife returned with the first episode of what network CBS is billing as a special “three episode event.” How exciting! The episode was curiously titled, “Parallel Construction, Bitches,” and there was a lot going on. (Don’t worry, we do eventually learn what “parallel construction” is.) When we last saw the hotshot lawyers of The Good Wife, a damning surveillance video showing Peter Florrick’s political fixer Jim Moody moving a stuffed ballot box into a Chicago polling station had just been leaked to the press. The twist? Alicia acted as Peter’s lawyer on election night! Remember? At first she argued in court to have all the ballots from the aforementioned box thrown out, but then when she found out that the majority of the votes inside were for Peter, she changed her tune. I’ve got to say, things are not looking good for the Florricks.

Chicago’s infamous, dashing drug lord Lemond Bishop is in trouble with the Drug Enforcement Administration (DEA) again, and he calls in his extensive team of lawyers to help bail him out: Alicia, Cary Agos, Will Gardner, Diane Lockhart, and his “personal attorney,” Charles Lester. That’s right — Alicia and Cary are forced to argue in court alongside Will and Diane again. Awkward! But I guess when you’re an infamous drug kingpin, you’ll take as many lawyers as you can get. From the get-go, the DEA’s case seems a little flimsy. Their first witness, a real estate agent who claims to have seen Bishop unloading drugs from an SUV while she was showing a condo in the building across the street, can’t seem to keep her story straight. Alicia and Cary think she may be lying, but if so, where did the DEA get their dirt on Bishop?

Bishop’s “personal attorney” Lester determines that someone from Florrick/Agos must have leaked information about Bishop’s drug shipment to the DEA. After all, Bishop only mentioned the date, time and location of his shipment during meetings with his lawyers at Florrick/Agos. Everyone’s a suspect! Okay, well, really just Alicia, Cary, Clarke Hayden, and investigator Robin. Lester and Bishop concoct a sly scheme to uncover the mole, and all signs end up pointing to…Alicia. Gasp! “But she’s the Good Wife! She can’t be leaking information!” Don’t worry, she’s not — her phone is just being tapped by the DEA. Or so they think. To be safe, Bishop orders a whole bunch of burner phones for the lawyers of Florrick/Agos until they can get this whole wiretap situation straightened out.

This next part’s a little complicated (OK, really complicated), but stay with me: remember how the National Security Agency (NSA) has been tapping, like, everybody’s phones for a while (Alicia’s phone, Will’s phone, Eli Gold’s phone, etc.)? OK, me neither, but they’re still doing it. (I think it has something to do with the fact that Lockhart/Gardner represented Danny Marwat, a suspected terrorist, all the way back in season 3.) While tapping Alicia’s phone, the NSA picked up some juicy bits of information about Bishop’s drug operation and they passed them on to the DEA. This is where parallel construction comes in. Apparently, the DEA can’t build a case using classified information received from the NSA, so they have to create a “new evidence trail” — their phony witness, the real estate agent. And that’s parallel construction. So the DEA isn’t tapping anybody’s phone, they just received information on Bishop from the NSA, who is tapping everybody’s phone. Got it?

Luckily for Florrick/Agos, Lockhart/Gardner, and Lester, all charges against Bishop are eventually dropped. A victory for rich lawyers everywhere, a sad day for all those fighting against Chicago’s massive drug problem.

Like I said, things are not looking good for the Florricks. Peter’s people were caught on tape trying to rig the election and Alicia was Peter’s legal representation on election night — they both could be facing jail time! Enter Nelson Dubeck, an agent from the Office of Public Integrity. “What the heck is that?” I don’t know, I literally I had no idea such an office existed until tonight. But it does, and Dubeck is a driven, no-nonsense dude intent on nailing Peter to the wall.

Dubeck accosts Peter’s ethics advisor, Marilyn Garbanza, on the street and tries to convince her to cooperate with his election fraud investigation. Garbanza, who always plays by the rules, hands over a USB drive containing the incriminating election night surveillance footage. Dubeck then shows up at the Florrick/Agos offices and attempts to intimidate Alicia into implicating Peter — but she won’t do it. She's got too much chutzpah. Later, Dubeck stops by the NSA offices where an agent plays him an interesting phone conversation between Alicia and Eli, in which Eli reveals that if the Feds want to bring down Peter, they need Will on their side. More parallel construction! The episode ends with Dubeck threatening Will with a subpoena unless he agrees to cooperate and answer all of his questions. Will refuses and gets served.

What’s Kalinda up to?

Kalinda didn’t have much to do this episode…unless you count continuing to stomp on Cary’s heart by stringing him along and making him think that he actually stands a chance with her! She’s so cruel. After Cary mistakenly tells Lockhart/Gardner that the DEA is tapping their phones (he was just trying to be nice!), Diane sends Kalinda to find out if Cary’s telling the truth or if he’s just pulling a juvenile prank. Who knew that law firms played so many practical jokes on each other! And what’s the best way to find out if Cary's telling the truth or not? If you said, “Administer a lie detector test,” you are wrong. The correct answer is: have sex with him!

Kalinda hops into bed with Cary once again to have a little fun, but mostly just to find out if Lockhart/Gardner’s phones are actually being tapped. Cary, who apparently doesn’t feel all that bad about being used in this way, swears up and down that he’s telling the truth (and at this point, he thinks he is). Nevertheless, Kalinda shows up in Diane’s office the next morning and reports that Cary’s lying. Are these two ever going to get along?

Whew. So this episode was really complex, but writer Erika Shelton Kodish did a good job of giving us the necessary information without screaming, “Pay attention to this part, it’s really important!” I’d be lying if I said that the NSA wiretapping storyline was totally crystal clear to me, but that’s OK. The Good Wife is at its best when it’s dealing with tricky legal loopholes, backstabbing lawyers, and political intrigue, not when it’s getting bogged down with a ripped-from-the-headlines story of the week.

Next Week: Alicia asks Will, “Why do you hate me?” and other heartbreaking revelations!

More like this
Everything You Need To Remember Before ‘The Handmaid’s Tale’ Season 5
By Grace Wehniainen
Where Is The Bling Ring’s Rachel Lee Now?
By Arya Roshanian
What Is 'Pretty Wild' Star Tess Taylor Up To Now?
By Morgan Leigh Davies
Where Is Armie Hammer’s Ex-Wife Elizabeth Chambers Now After 'House Of Hammer'?
By Grace Wehniainen and Radhika Menon
Get Even More From Bustle — Sign Up For The Newsletter